Now the site of the Fresno Fairgrounds, the lot on South Chance Avenue was once used to house Japanese American internees during World War II. It was used for a few months during 1942 until it began to be used by the Air Force for training.

Barracks at the Fresno detention center 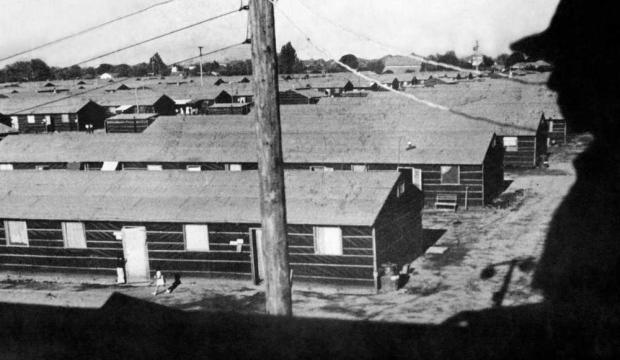 A former detainee displays the names of the family members who were also detained under the same facility. 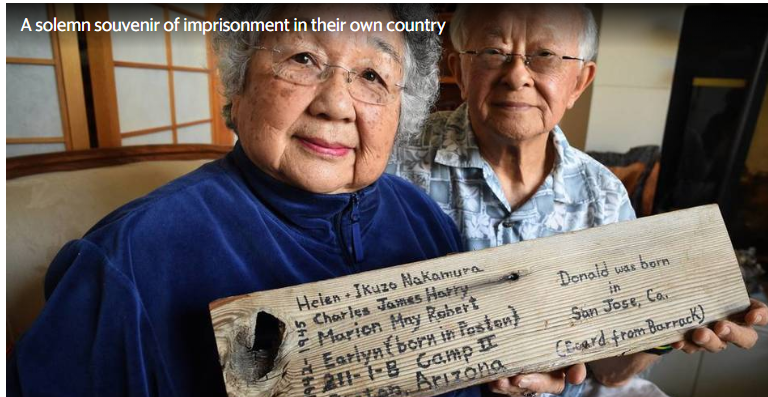 Japanese-Americans behind barbwire fence in the facility. 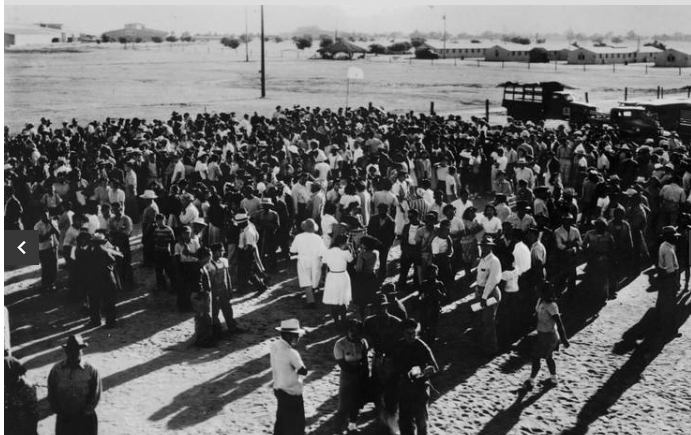 Between May and October of 1942, more than 5,000 Japanese-Americans were held at the hastily-constructed Fresno detention center, which was located at what is now the Fresno Fairgrounds. The facility was one of thirteen assembly centers built in California, and was the first stop before detainees were relocated to more permanent facilities.

The internment of Japanese-Americans became US government policy following the Japanese attack on Pearl Harbor. Radio and newspapers circulated rumors that inflamed existing prejudice and claimed without evidence that many Japanese-Americans were spies, disloyal, or dangerous enemies who could pose a threat to the nation's security. In California, there was already animosity directed toward Japanese-American farmers who were often viewed as competition in agriculture. Eventually more than 120,000 Japanese-Americans were detained with no due process or evidence of espionage.

Executive Order 9066 was issued by President Franklin Delano Roosevelt to order the removal Japanese Americans from the West Coast. The result was that these citizens and immigrants were sent to facilities such as the Fresno Fairgrounds. The descendants of the victims and some of the aging people who experienced detainment continue to share their story.

Nancy Suda, whose family was sent to the detention center, offers a view of the daily lives of those who were sent to this detention center. Families were placed in one person rooms, with torn sacks to fill with hay to sleep on, and people were forced to have limited clothing while imprisoned. Guards walked down the halls of the barracks twenty-four hours a day to ensure there were no escapees. The 5,000 Japanese-Americans would crowd into a "mess hall" for chow, which caused many to have food poisoning from the malnourished foods they were fed. Despite all the mistreatment, victims were able to form their own community within the walls of the barracks. Children who were equally abused as the adults, conducted in class sessions taught by the adults even with the lack of school resources.

The Fresno facility included more than 100 barracks in the center of the race track as well as four other blocks of twenty barracks each on either side of the track. Most of the inmates in the Fresno facility were sent to permanent camps in Arkansas and Arizona. The facility closed in October of 1942, the last temporary facilities to do so. Even though the facility permanently closed, the detainees were sent to permanent camps for three more years which caused most the families to lose their farms, homes, businesses, and their freedom.

A memorial to the site's role in Japanese-American internment was placed at the entrance to the fairgrounds in 1992. The memorial includes names of many of the people who were sent here along with stories and photos of the 1942 detention facility. The memorial was enlarged in 2011.