Fort Howell is one of the most unique Civil War forts on the Eastern Seaboard as it was later used to protect a community of freed slaves from being recaptured by Confederate troops. Today, the original fort structure no longer remains, but its history is commemorated by historical markers and a walking trail. In 2011, Fort Hall was listed on the National Register of Historic Places.

This is the sign of the site of the fort. The fort is free to all visitors during the daytime. 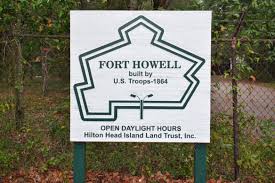 This is the historical marker telling about the fort. 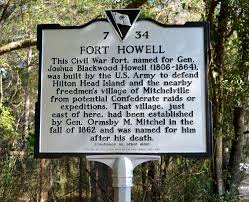 This is the bridge over the moat of the fort. 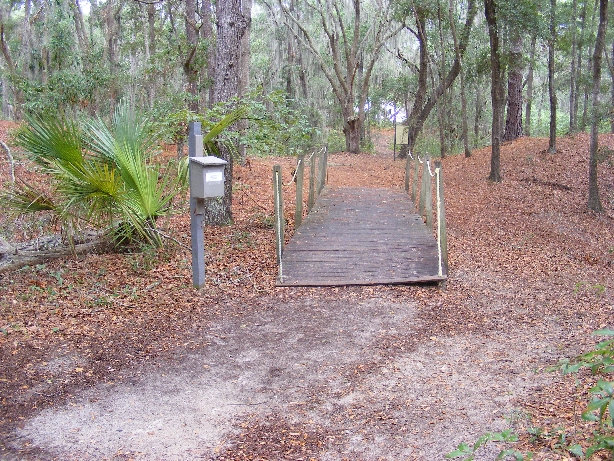 On November 7th, 1861, the Union forces made an early attack and subsequent occupation. After the battle was over, the Union soldiers set out to free the slaves as the Confederate troops and plantation owners retreated, resulting in forts to be built on Hilton Head Island in South Carolina. Between 1862-63 Freed Black residents and slaves went to work set up a village on Hilton Head island called Mitchville, and the community grew as the years went by. Fort Howell, the last of the four forts constructed on the island, was built in 1864 by the Union soldiers of the 32nd U.S. Colored Regiment from Pennsylvania. These soldiers realized that these freed slaves of Mitchville would need protection from the attacks.

The fort was named after General Joshua Howell, who was killed in the battle of Richmond.It had a 50- foot- long earthwork was used to protect the troops from enemy assaults. It was designed for 27 guns, 11 field pieces, and 16 siege guns. The path around the fort. The path surrounding the exterior of the fort crosses over a small wooden bridge. Under this bridge is a moat that was used to slow down advancing troops.

The fort was built on three acres of land that had once been a cotton field. It continued to protect the freed slaves after the war, but after a while, Hilton Head hardly had much use for the fort. After 150 years of hurricanes, erosion, and the growth of plants and vegetation, the fort has been forgotten about and has mostly disappeared.  However, Fort Howell was deeded to the Hilton Head Island Land Trust in 1993 to ensure its public preservation as a historic site for current and future generations to enjoy. Today, the site of the fort still stands strong.