New Vrindaban was establised in 1968 by members of the International Society for Krishna Consciousness and its leader Srila Prabhupada, who hoped to create a society based on Krishna Consciousness in the United States. Sri Sri Radha Vrindaban Chandra Mandir is the main temple hall and one of the main destinations for visitors to this community along with the Temple of Gold. 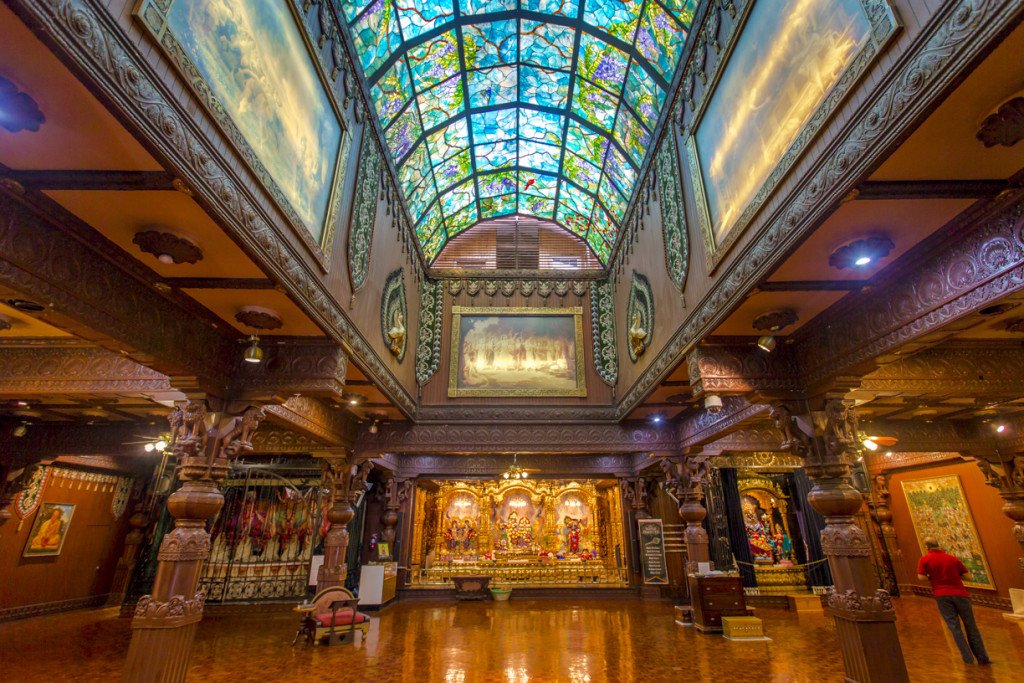 The community began with only a few followers, a shack, no electricity or water, and a cold winter. Today the community is home to a few hundred residents and over 50,000 people visit the spiritual community each year. There are several spiritual festivals throughout the year, including the Festival of Colors. Based on India's Holi Festival, this is a celebration of spring and friendship, commemorated by the throwing of bright colored powders on other participants.
The main attraction within the town is the Palace of Gold. This palace was originally planned to be Srila Prabhupada's residence. Unfortunately, he passed away in 1977 before its completion. Instead, it became a gift of devotion to Prabhupada's ideals. The Palace of Gold is known for its intricate design including sculptures, extensive woodwork, cut marble and semi-precious stones, carved teakwood, stained glass and cut crystal, as well as extensive use of gold leaf.
Inspired by an emphasis on healthy, natural eating, the town prides itself on its Small Farm Training Center. Through hands on training, this center teaches those interested how to grow produce organically for themselves by way of various techniques. It is run by volunteers within the town and regularly accepts interns. Over 25,000 lbs. of organic produce was grown in 2012, with much of it donated to local shelters and soup kitchens. Also managed by volunteers, there is a famous rose garden surrounding the Palace of Gold and a free range dairy farm.