The Oakes African American Culture celebrates the legacy of the Oakes family, a prominent and successful African American family in Yazoo City that lived in the house until 1989. It also honors and preserves the legacy of other African Americans who have contributed to the city's and region's cultural history. The Classical Revival home which was originally built around 1866 and then rebuilt by Oakes family descendants in the coming decades. The house features exhibits, both permanent and traveling, that showcase the accomplishments of African Americans in various areas such as music and literature. The house also contains furniture and belongings of the Oakes family, as well an archives containing family letters, business papers and other documents. Artwork and photographs are also on display. The center also offers lectures, classes and various other programs. The house itself was added to the National Register of Historic Places in 1993. 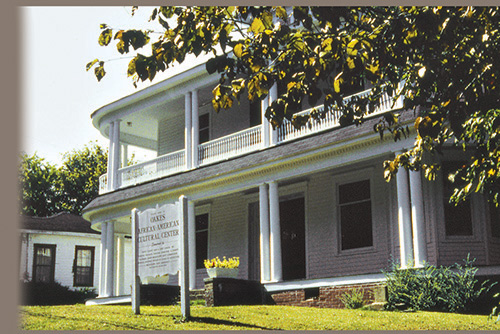 The original home, which was a simple structure, was built by John and Mary Oakes, free Blacks who moved to Yazoo City in the 1850s. It is believed that John was a skilled carpenter and passed his skills to his son Augustus, who would become a prominent builder and educator. Augustus acquired the house in 1885, and rebuilt it a few times. He was dedicated to the education of African American children in the city and served as principal to three schools, one of which he founded in 1884 called Oakes Academy. He then left the education field to establish Oakes Lumber Yard in 1900. His was one of the few businesses to survive a devastating fire in 1904 that destroyed much of the city. His company helped the city rebuild. Augustus died in 1924, leaving a strong legacy that lasts today.