The Pendennis Club is a social organization where members are meant to feel at home. The building consists of a library, a billiard hall, as well as a dining hall. Numerous elites have been welcomed here in the past. The club opened its doors in 1928. The architecture and its intricate detail is what makes this building stand out and is also what put it on the National Register of Historic Places in 2003. 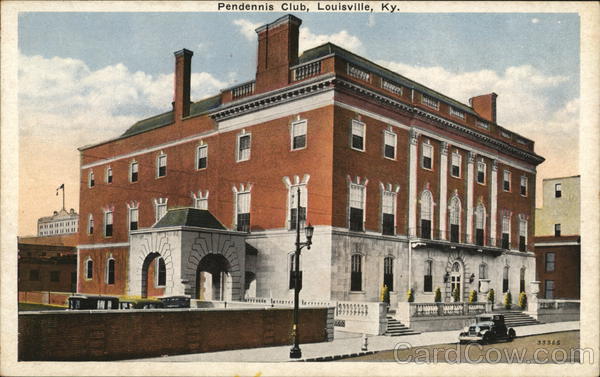 The history of the Pendennis Club is rather interesting. While it has always been a social organization, it first started out as a gentleman’s club. This club was particularly strict with its members or rather, the select members it allowed in. This elite private club excluded prospects such as African Americans, people of the Jewish faith, as well as females. The club remained this way well after the majority of most businesses desegregated in the 1960s.

One man in particular, Louis Coleman Jr., was denied membership into the Pendennis Club because of his race. He then filed a complaint in 1991with the Kentucky Human Rights Commission. Following this complaint, Louis teamed up with Jan Phillips and Richard Beal and protested by staging a lunch on the sidewalk in front of the building. These three advocates believed it was the best way to achieve desegregation for the club. Their unique style of protesting was repeated throughout the 1990s.  Because of his protests on the club along with other civil rights issues at this time, Coleman Jr. is one of Kentucky’s most recognized civil rights activists. The members of the club countered this complaint and said that they were entitled to privacy as well as free association under the Constitution to allow in whomever they please. The Pendennis Club did not fully open its doors to members of race, gender, and religion until the year 2006. Following desegregation, several members of the club said that many African Americans still refuse to belong to that particular environment given its history on racism. Though the club eventually opened its doors to a wider variety of people, it is still remarkable that the Pendennis Club managed to continue to discriminate on the basis of race, illegally, forty years after the Civil Rights Movement.

Let’s fast forward to the Pendennis Club today. Today, the club persists because it is open to anyone no matter his or her race, religion, or gender. No one has a right to be a member. Nor does heredity play into becoming a member. As for what goes on inside, there is a variety of things for its members to take part in. There is squash, fitness, banquets, as well as food and drinks available. While it started out with a tortured past, the club applauds itself at being a place where one can relax and enjoy his or her time there, presenting itself as a place of civility, decency, and social graces. The Pendennis Club has tried to reform by looking to the future with open arms towards who is allowed in as members.

For further information, I recommend
1. The Pendennis Club website (http://pendennisclub.org/)
2. The Courier Journal