In the summer of 1864, General Jubal Early led Confederate forces towards Washington, D.C. and threatened to capture the capital city. On July 9, Union troops under General Lew Wallace met Early's forces on the banks of the Monocacy. At Monocacy National Battlefield, visitors can experience this and other stories of the past in a landscape that has changed little since the 19th century.

Men reenacting the battle in 2009, which marked the 145th Park Anniversary 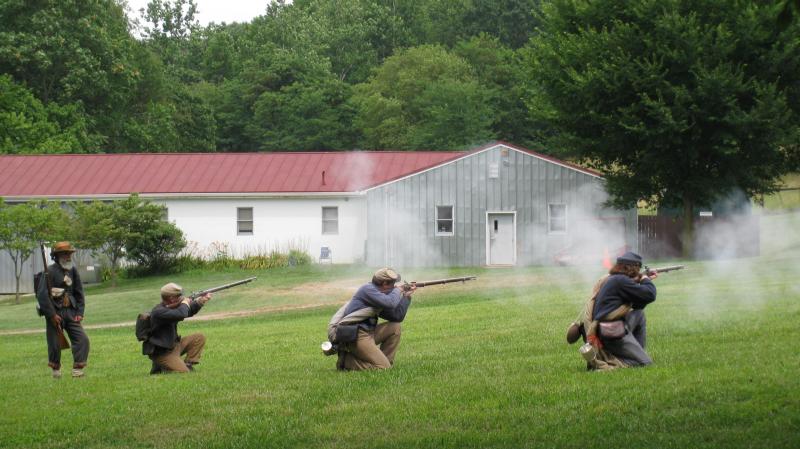 The Monocacy National Battlefield is a unit of the National Park Service and is the site of the Battle of Monocacy Junction in the Civil War on July 9, 1864. The battle is labeled "The Battle That Saved Washington."

Monocacy National Battlefield comprises 1,647 acres of farmland, forest and riparian areas a few miles south of Frederick, Maryland in the Monocacy River valley. The park encompasses six component properties including the Baker, Best, Lewis, Thomas, and Worthington Farms, as well as the Gambrill Mill and House.

The visitor center has been relocated from the historic Gambrill Mill to a new facility on the west side of the Monocacy River. It offers an electric map orientation program, an interactive computer program, interpretive displays, and artifacts of the battle. The visitor center is the starting point for a self-guided four-mile auto tour and 1/2 mile loop walking trail. National Park Service rangers and volunteers host battle walks, special programs, an auto tour and special events throughout the summer season. The interpretive Worthington Farm Trail allows the visitor to walk parts of the battlefield and explore the native flora of the region.