Dedicated in 1921, this statue commemorates the life of Wampanoag leader Massasoit and his efforts to promote diplomacy with the English colonists. Massasoit was the leader of the Wampanoag tribe during the arrival of the pilgrims to Plymouth Rock, Massachusetts in 1620. He was known for his contribution to assisting the early English colonists of this area. He signed a treaty of friendship with the English guaranteeing him peace and mutual acceptance. 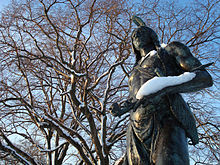 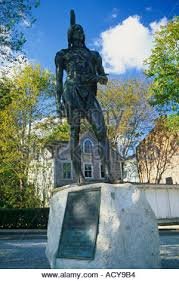 The statue depicts Massasoit in a heroic pose, a symbol of his strength and leadership as a Sachem for his Native American tribe. The statue was created by artist Cyrus E. Dallin. Cyrus was an American sculptor best known for his depictions of Native American men, including the statue of Paul Revere located in Boston, MA.

Massasoit was the chief leader of his tribe, the Wampanoags. Massasoit came from what is now Bristol, Rhode island to Plymouth rock, and came into contact with the Pilgrims who had settled into the new colony. Massasoit ended up in Plymouth because of the many diseases that swept away a good majority of the Wampanoag tribe. "...the Indian leader appeared in the new colony and offered friendship. After some negotiations, the chief signed a peace treaty with the English, one vowing nonaggression and mutual defense in case either were attacked. It was a treaty and a friendship that Massasoit would keep for the next 40 years of his life (Massasoit, 2004).

Massasoit's mutual friendship with the English did not only benefit his own tribe: Massasoit contributed his knowledge of fishing, hunting, and food gathering to help the new settlers survive through blistering cold winters and scolding hot summers. Massasoit was also the father of King Philip, also known as Metacom. When Massasoit passed away, Metacom became sachem of the Wampanoags. Metcacom was becoming witness of the beginning trades between Indian land and English gunpowder, liquor, and blankets, all things that threatened his sovereignty. A new treaty was then signed that took away gun rights to Indians. The half century of peace established by Massasoit was gone. The issues between the Natives and English settlers led to King Philip's war (Metacom) between 1675 and 1676."The fighting lasted fourteen months and destroyed twelve frontier towns, ending shortly after Metacom was captured and beheaded. Some of his supporters escaped to Canada, while others who surrendered were sold into slavery" (History.com, 2009).


The statue is located near Plymouth Rock, which is also home to Massasoit Community College and Massasoit State Park. According to an oral tradition, Plymouth Rock was the first place William Bradford and the Pilgrims set foot when they came to America. Bradford was a signatory to the Mayflower and went on to serve as Governor of the Plymouth Colony intermittently for about 30 years between 1621 and 1657.where the Mayflower arrived in 1620" (Doherty,1999).