Home of Anne and Carl Braden

This was the home of Louisville civil rights activists Anne and Carl Braden. From the 1940s to the end of their lives, this white couple worked with African American leaders and community members to support civil rights campaigns that challenged various forms of racial injustice. The couple faced numerous hardships, including imprisonment, but they also secured the support and trust of civil rights leaders such as Martin Luther King Jr. Throughout the civil rights movement, the Bradens received violent threats and were accused of being communists during the Cold War era. Today, the home includes a historical marker that commemorates their lives and the Anne Braden is honored as the namesake of the Anne Braden Institute for Social Justice Research.

Anne and Carl Braden worked tirelessly for the civil rights of African Americans before, during, and after the Civil Rights Movement of the 1960s. 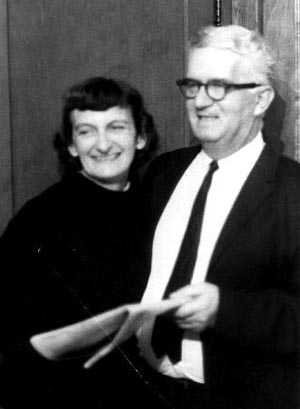 The home of Anne and Carl was a common meeting place for civil rights organizations and leaders. 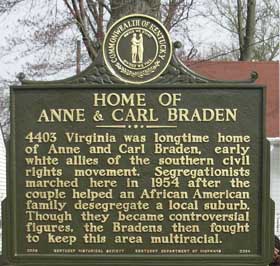 Anne Braden was born in Louisville and grew up in Alabama. She earned a degree from Randolph-Macon Women's College located in Virginia where she was inspired to work with the press, leading to her employment with the "Louisville Times." During her time with the paper, she met Carl and became his wife in 1948. The newlyweds devoted an increasing share of their time to promoting equality and civil rights for African Americans. For example, they worked with the 1948 Progressive Party and were active in several other civil rights groups who fought to end segregation. They also supported the Southern Conference Educational Fund for whom they wrote the bulletin called the "Southern Patriot." The SCEF tried to use New Deal policies to reduce poverty and end political disfranchisement in the South during the 1940s and 1950s. In the late 1950s, SCEF promoted education and challenged segregation, leading the Bradens and others to work closely with organizations like the Student Nonviolent Coordinating Committee (SNCC) in the 1960s. SCEF members were passionate about integration and inspired by the work of SNCC activists who launched direct action campaigns.

Anne and Carl Braden risked their livelihoods and lives when they assisted African American families in purchasing homes outside of segregated neighborhoods. In 1954, for example, the Bradens helped Andrew Wade and his family purchase a home in an all-white Louisville suburb. The Bradens bought the home and then switched the title to Mr. Wade. After the Wade family moved in, the home was bombed by their white neighbors. Because of the help they gave the Wades, the Bradens were falsely charged with the bombing. Similar to other liberal supporters of civil rights, the Bradens were accused of being supporters of communism. Such an accusation was difficult to prove or disprove and could lead to serious repercussions in Cold War America. During the early 1950s, these kinds of vague accusations were common for those who tried to change the status quo and sway political opinion on civil rights. Although the charges against the Bradens for bombing the home they had purchased were eventually dropped, the couple faced backlash and threats from white residents for decades. While the Bradens found little support among white residents, their house became a meeting place for organizations like the Student Nonviolent Coordinating Committee (SNCC) and the NAACP. Prominent figures such as Rosa Parks, Martin Luther King Jr., and Angela Davis also visited the Braden’s home during the 1950s and 1960s.