The confectionary Kogetsu-Do was founded in 1915 by Sakino and Sugimakso Ikeda, immigrants from Japan. They or their descendants have operated the business for most of the more than one hundred years of its existence. The building is listed on Fresno’s Local Register of Historic Places. 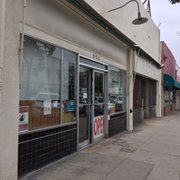 Sakino and Sugimakso Ikeda immigrated to California from Hiroshima and began their business, the confectionary Kogetsu-Do, or Lake Moon Company, in 1915. They purchased the building in 1920. Though the business borders Fresno’s Chinatown, the business is Japanese-owned and specializes in traditional Japanese treats like manju-ya.

After two years of internment, the Ikedas reopened their business in 1944. Since that time, either they or their descendants have operated the confectionary, offering candies, traditional Japanese sweets, and more recently, frozen specialties. The building is listed on Fresno’s Local Register of Historic Places.