Dedicated in 1997 and located directly across from Pasadena City Hall, these two large bronze statues of brothers Jackie and Mack Robinson commemorate their contributions to American athletics and civil rights, as well as their formative years in Pasadena. The statue of elder brother Mack looks directly toward City Hall, where he worked after gaining the silver medal as an Olympic sprinter in 1936, while Jackie looks toward the east and his groundbreaking career in professional baseball.

A famous snapshot of Jackie Robinson at bat playing for the Brooklyn Dodgers. 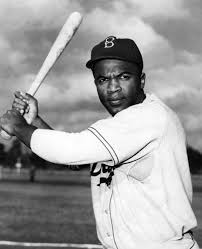 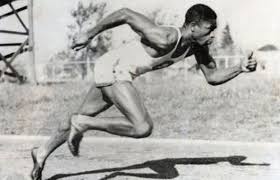 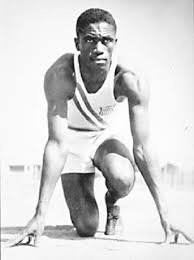 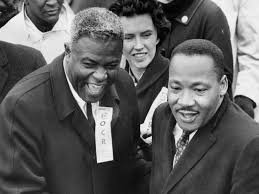 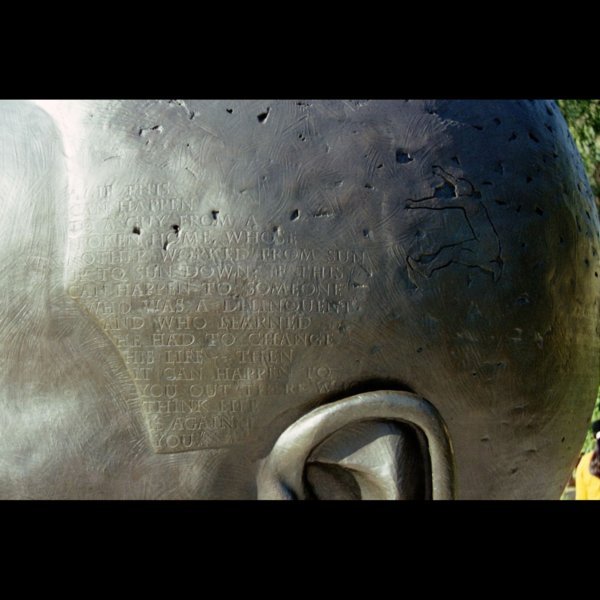 Though born in Cairo, Georgia, Jackie Robinson spent his youth in Pasadena at John Muir High School and later Pasadena Junior College before becoming the first athlete at the University of California, Los Angeles (UCLA) to letter in four sports (football, track, baseball, and basketball). After an honorable discharge from the Army in 1944--for refusing to move to the back of an Army bus in objection to segregationist policies--he entered into major league baseball. He soon joined the Brooklyn Dodgers, where his electrifying performance as the now-famous number 42 gained him everlasting fame and a World Series win in 1955. He retired from professional sports in 1957 and founded the Freedom Bank: the first American bank to be owned and operated by African Americans.

The career of Matthew Mackenzie “Mack” Robinson, Jackie's older brother, proved less straightforward. When his early talents as an athlete went unrecognized, he was forced to find private sponsorship to make his way to New York for the 1936 Olympic tryouts. A Pasadena businessman at last paid his way, and after making the team Mack went on to win the Silver Medal in the 200-meter sprint, less than half a second behind famed teammate Jesse Owens. His relationship with his adopted home of Pasadena was complicated upon return, however, and he was largely shunned despite his recent Olympic win, due in part to a recent lawsuit by Black Pasadena residents to desegregate city pools.

Despite continued success as a college athlete and a well-earned place in the Oregon Sports Hall of Fame, Mack did not go on to a professional career in sports. Instead, he worked in a direct capacity for many years with Pasadena City Hall--including as a street sweeper on the night shift. Later, he became a strong advocate for a number of civic groups campaigning against street crime. Since his death in 2000, Pasadena has named a post office after Mack, and Pasadena City College’s football stadium was renamed Robinson Stadium after both brothers.

These two bronze head statues memorialize the lives and contributions of two of Pasadena’s most legendary citizens. Dedicated in 1997, three years before Mack’s death, the sculpture was designed and executed by Stuart Schechter in collaboration with Ralph Helmick and John Outterbridge. Schechter and Helmick were frequent collaborators on public art pieces between 1993 and 2008, and expressed a desire that their memorial to the Robinsons evoke more of their lives beyond their athletic records. The texture of the brothers’ hair is actually comprised of texts and images that allude to their many accomplishments.