This historical marker denotes the location where the Woodland Plantation (also known as Andry Plantation) and the largest slave revolt in American history was located. Known to historians as the German Coast Slave Revolt, this rebellion against chattel slavery began on January 8, 1811. Charles Deslondes, a slave tasked as a "driver" on the plantation organized the revolt which included between three hundred and five hundred slaves. The rebellion was put down by the militia before it could spread beyond the immediate area as Deslondes and his fellow freedom fighters had planned. Similar to the plot of John Brown, the participants hoped to create a place controlled by former slaves where current slaves could escape as a step towards ending slavery in North America.

This is the busy intersection where the marker is located. 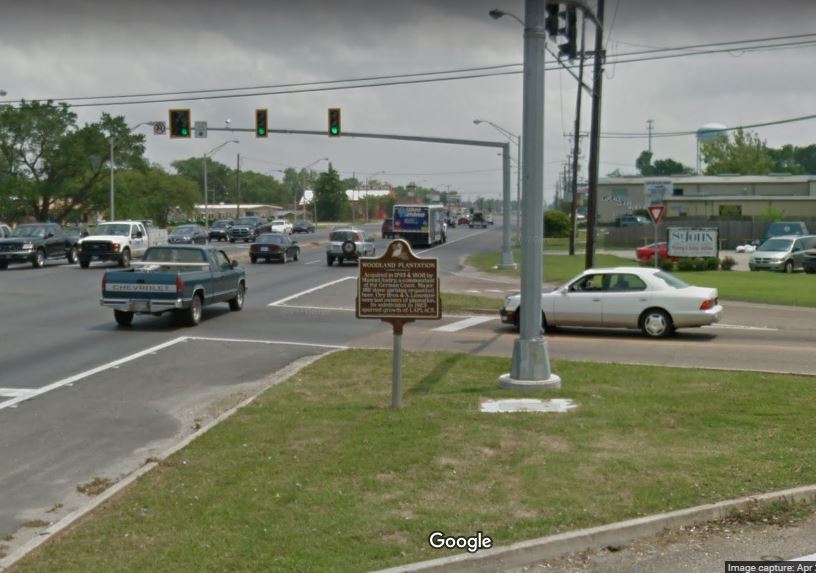 Historical marker for the Woodland Plantation that mentions slave revolt in one line that reads "Major 1811 slave uprising organized here." 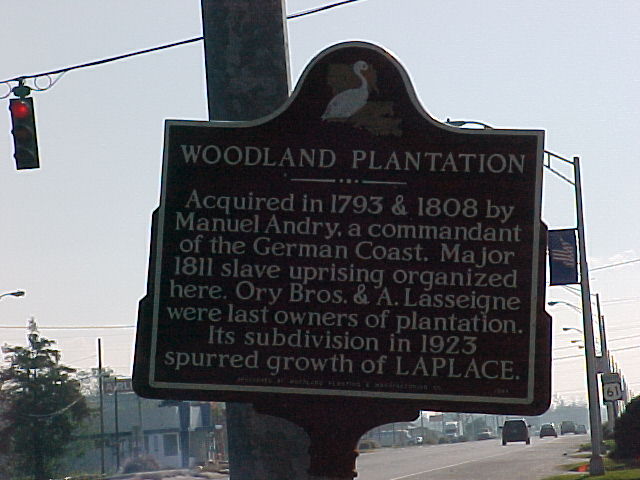 This is artwork referencing 1811 revolt, but the artist is unknown. 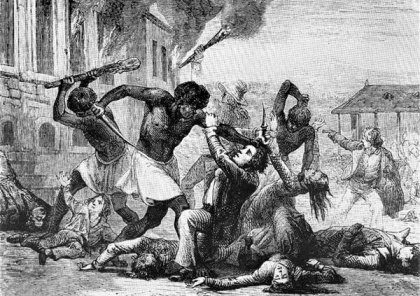 This is a lithograph by Currier and Ives of the Woodland Plantation. It was used by Southern Comfort as an image on their whiskey bottles dating back to 1934. 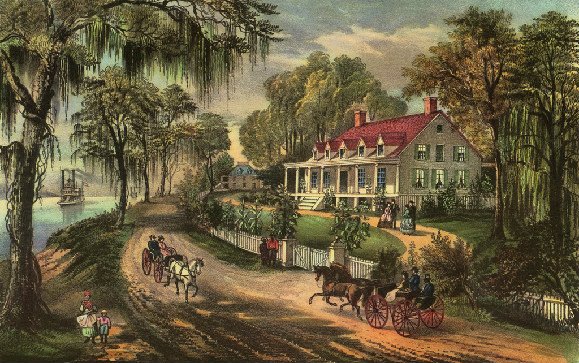 The Woodland plantation was in what was known in the 1800s as the German Coast, and it was mostly populated by sugar plantations. It was about 40 miles north of New Orleans and bordered by Lake Ponchartrain and the eastern bank of the Mississippi River. In addition to this, the Woodland plantation was also the home of the local militia’s armory – complete with weapons, ammunition, and uniforms. It was owned by Manual Andry, a German colonel in the militia. Along with him lived his son Gilbert, who later became the first casualty in the slave revolt, and other family members. At the time of the coming revolt, the ratio of white to black people was 1 to 5, so the slaves well outnumbered their white counterparts.

Charles Deslondes, the leader of what would become the slave revolt of 1811, was born to a slave mother and her white master. Charles functioned as a "driver" and was owned by the Woodland plantation owner, Andry. Many historians believe that Deslondes had been empowered and inspired by the successful Haitian Revolution that was spearheaded by Toussaint L’Ouverture. Charles was present in Haiti (St Domingue) as a Lieutenant in during the revolution and later he was brought to Louisiana. Leading up to the revolt, word had been passed from plantation to plantation about what Deslondes and other slaves were planning.

Just days before the revolt, there were secret meetings among slaves on the Woodland plantation where they made plans, appointed leaders, and were trained in preparation for the coming fight. The time of the revolt was when the sugar was being harvested and slaves had more time to themselves where they were not being overly watched by the masters. This allowed them time to prepare for the uprising and gather fellow slaves to join them.  Many of the slaves that participated were from Africa and identified with multiple African tribes, however, numbers of them did speak English. Deslondes also got many of the slaves marooned in local swamps to participate as well.

On January 8, 1811, around midnight, armed with weapons and tools they had scavenged and stolen, Deslondes and his crew of fellow slaves descended upon the Woodlands plantation. They wounded Manual Landry, though not mortally, and he escaped. Gilbert, Manual’s son, was not so lucky and he was murdered by an ax.  This was the beginning of the largest slave revolt in American history. Following this attack, Deslondes led his crew towards New Orleans, plundering and burning plantations (many empty due to many owners being in New Orleans in preparation for the upcoming Mardi Gras), getting more slaves to join them and killing a few slaves that refused to participate. It is believed that two white people were killed in the revolt – Andry’s son Gilbert and one other person.  Charles and his crew are thought to have accumulated a total of 300-500 slaves for this revolt.  Ultimately Deslondes crew was overcome by the militia and captured on January 10, 1811, in what is now known as Kenner. The end of the rebellion came after the revolting slaves had depleted their ammunition. Some historians postulate that had the revolt been successful that New Orleans could’ve become the first black republic.

Deslondes managed to escape immediate capture but was overtaken a few days later after the revolt's last stand with the militia. He did not receive trial or questioning – they executed him by chopping off his limbs and then shooting him. He was used as an example to fellow slaves, and his head (and those of many of the participants) were put on stakes and placed along the road to New Orleans as a visual deterrent for any further revolts.  Many of the revolting slaves were killed when they resisted at their last stand with the militia, some escaped into the swamps/woods, and others were jailed or released (in the case of those slaves who tried to stop the revolt). Ultimately the revolt was defeated and life returned to “normal” for antebellum Louisiana, but this event still stands as the largest slave revolt in American history and is currently being investigated by historians for more details.