This was Kentucky’s first and its largest hospital serving the African American community during the era of segregation. 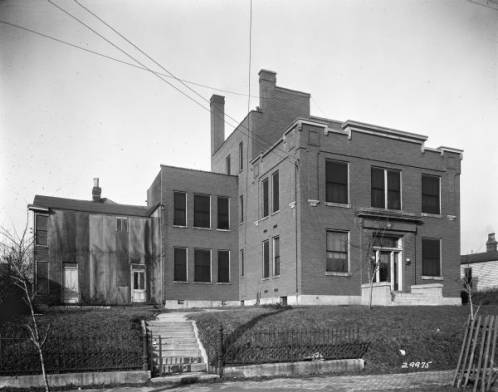 Louisville's Red Cross Hospital operated from 1889 to 1975. The hospital began in 1899 doctors, W.T. Merchant and Ellis Whedbee opened the first hospital for members of their race in a four-room private residence at 6th Street and Floyd. It was a small hospital, but it was a promising step forward for both the hospital and the African American Community. Six years later the hospital moved to 1436 South Shelby Street and expanded the facility. In 1912 the first brick facility was constructed, and over the course of the next fifty years, the hospital grew in both size and importance in the community.

The hospital was entirely staffed by African Americans and was one of only a few medical facilities available to African Americans beyond life-threatening emergencies. The Red Cross Hospital opened its own School for Nurses. Mary Merritt, R.N., was the first Black nurse to be licensed in Kentucky. She was the head of the on-site nursing program for thirty-one years, 1914 to 1945. The Red Cross Nurse training program at the hospital was closed in 1937. In 1948 the hospital reopened the training program.

By 1940-41 the hospital had not only an in-house doctor on staff, Dr. William Settle, but also had a Medical Director, Dr. J. B. Bell. The Red Cross Hospital was granted money from both state and city sources, and the hospital saw new growth. The American Cancer society certified the hospital to operate a cancer clinic in that same era. The hospital employed only Black physicians and staff until 1953 with the integration of the Jefferson County Medical Society. This allowed for a more open flow of medical professionals between hospitals. Jewish Hospital in Louisville became the first all-white hospital in the area to have Black doctors on their staff.

By 1965 the Red Cross Hospital was entirely modernized and earned the accreditation of the Joint Commission on Accreditation of Hospitals and memberships in the American Hospital Association, the Kentucky Hospital Association, the Ohio Valley Hospital Conference, and the Louisville Hospital Council. After 76 years of serving the City of Louisville, the Red Cross Hospital Closed its doors in 1975. Integration and the costs of operating a hospital led to its gradual closing, but during the era of segregation, the hospital served the citizens of Louisville.