The largest stone fortification ever built in the United States, Fort Monroe was in active military use from 1836 to 2011. After its closure, it was designated a national park, and is now a monument dedicated to its storied history. The Fort was known as the "Freedom Fortress" during the Civil War; the property acted as a safe haven for recently freed slaves. Current visitors can find more information at the Casemate Museum on site or in the updated links below. Fort Monroe, and the Casemate Museum, are now free and open to the public. The walking tour of historic sites (see the link below) takes about 90 minutes. 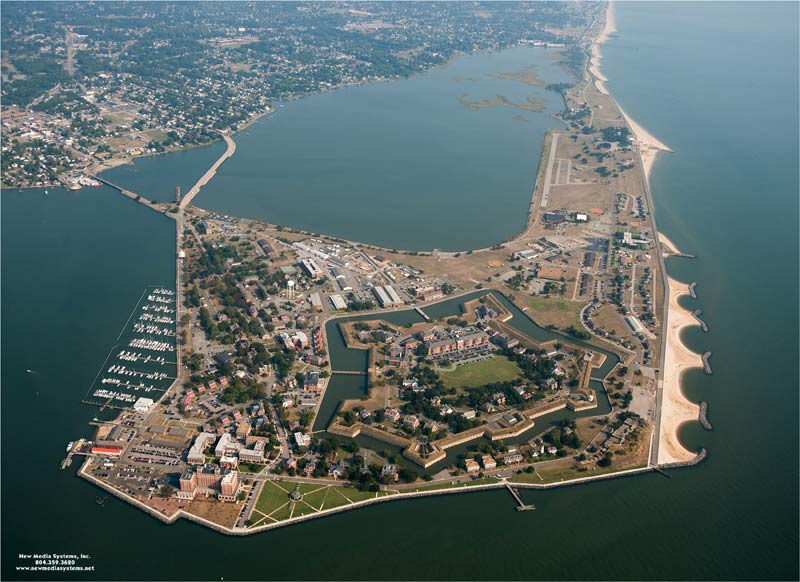 A watercolor map of the fort drawn during the Civil War bearing detailed notes on population and armaments contained within. 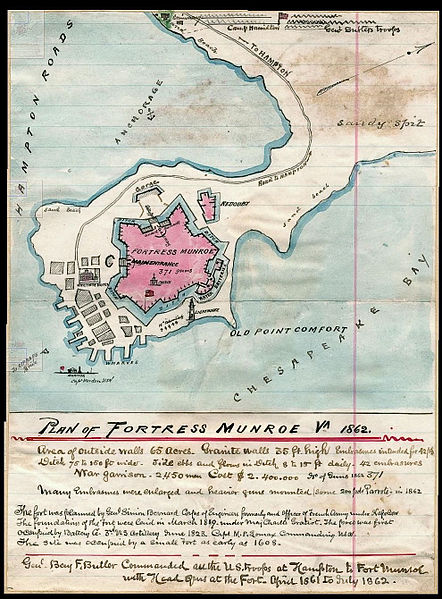 A duel of metal titans, an engraving of the battle that took place just offshore. 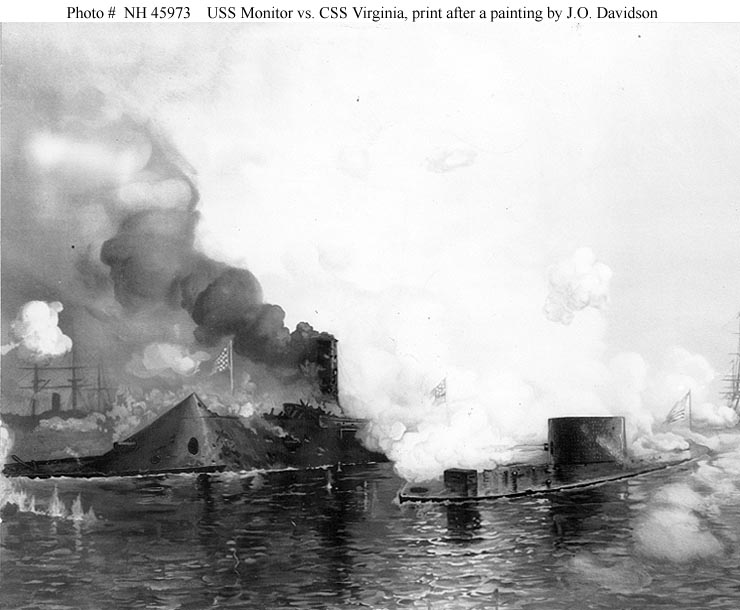 First completed in 1836, and decommissioned officially in 2011, Fort Monroe has become a memorial of its own history and to those that served within it. Though it is known for a number of contributions to our nation's history, one of its most notable contributions to history was its role in the Civil War . Known as "Freedom's Fortress," it was used as a haven for escaped slaves from the south, and the witness of a battle that changed the course of history.

As South Carolina seceded from the United States and other states prepared to follow suit, President Lincoln quickly moved to heavily fortify Fort Monroe, as it held the capability to be restocked by sea with the only land entrance a thin isthmus leading inward; it was thus easily defended on foot, as well. As the interior of the fortress was considered Union territory, after the famous "Contraband" act, the fort became a shelter to runaway slaves from the south, creating a small safe haven in the otherwise vicious Tidewater region for those fleeing Confederate bondage. Indeed, throughout, and after the war it served as a beacon of freedom to former slaves.

The fortress also served as witness to the Battle of Hampton Roads, an historic naval battle that marked the first time that two ironclad warships had ever engaged in combat with one another. The USS Monitor and the CSS Virginia traded blows off the coast of Fort Monroe, at nearby Hampton road. This fight, while a stalemate in and of itself, marked a greater change ahead, of the age of armoured combat.

In 2011, the fortress was officially decommissioned. Shortly thereafter it was declared a National Monument. Fort Monroe features parks, Outlook Beach, Engineers Fishing Pier and a boardwalk that are now open to the public from sunrise to sunset with no entry fees.

The Casemate Museum within the fort operates to honor the memory of Fort Monroe (see the separate clio entry for the Casemate Museum). Opened in 1951, the museum is one point on a walking tour of the fort that takes about 90 minutes (see the link to the museum's walking trail brochure below).

From Memorial Day to Labor Day the Casemate Museum is open daily from 10:30 am to 4:30 pm