LaFrentz-Poole hall was built in 1927. Throughout this time, it has continuously served as a residential building on Lincoln Memorial University's campus.

LaFrentz-Poole Hall as it appears today. 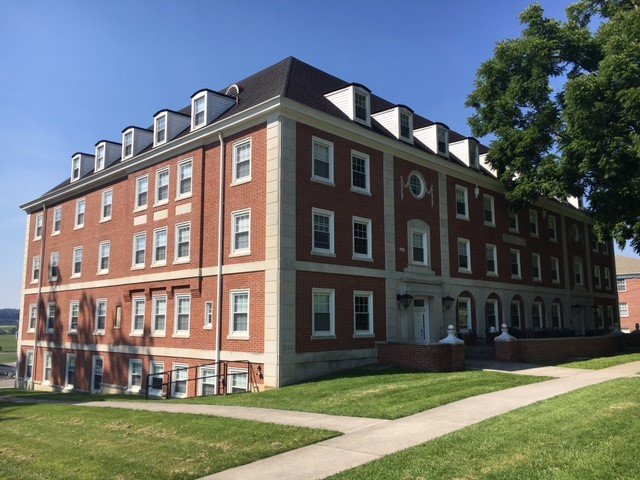 LaFrentz-Poole Hall takes its name in part from Dr. Ferdinand LaFrentz, a former president of the Board of Directors at Lincoln Memorial University. Popularly known as "LP," it has housed both men and women, although women were the only residents permitted inside the building in the earliest days of the dorm.

The following list was a set of dormitory regulations in place for LaFrentz-Poole Hall during the 1937-1938 School Year:

4. Radios must not be loud enough to disturb others.

5. There is to be no playing of musical instruments, no shouting, loud conversation, tapping on the floors or radiators, or noise in the corridors.

6. Everyone is to be inside the dormitory by the time quiet hour begins.

1. When leaving the campus (except when visiting local stores), when going on the Ridge Road, or when being absent from the dormitory after 6pm each student is required to record in the sign-out book the time of leaving, destination and when she returns, the time of her return.

2. Each student must sign out and in for herself.

3. Nothing is to be scratched out in the sign-out book. It must not be defaced in any way.

4. Girls attending events beginning at 7 must sign out and leave by 7.

1. Men are not allowed in the dormitory.

a. Before 5pm on any day, except when calling for a student to take her to church on Sunday, and between 3 and 7pm Sunday.

b. During quiet hour.

c. When girls are returnign home from any function which closes during quiet hour; i.e., a dance, basketball game, Sunday night church, etc.

2. At no time are men allowed behind the desk in the office.

3. Men are not allowed to answer the telephone.

4. Men are allowed in the recreation room only between 6:25 and 6:55pm on Monday to Friday inclusive and on Saturday from 6:25 until it is closed.

5. Juniors and seniors are allowed to have parlor dates on Sunday night. No one else is to be talking with men in the dormitory after 7pm, and men are not allowed to loiter in the lobby after this hour.

6. Men are never to go beyond the lobby and lounge of the dormitory without permission from the matron, even to make repairs.

7. Men are not to smoke in or around the dormitory.

D. Use and Care of Dormitory Equipment

1. The occupant of each room is held responsible for all damage to the room and equipment contained in it, as well as for damage she causes to the equipment in other parts of the dormitory.

2. No ironing is to be done in the girls' rooms.

3. Nothing is to be hung on the electric fixtures, adn the fixtures are not to be twisted in any way.

4. Lights must not be left burning in the room. They should be turned off in the corridors and bath rooms during the daytime.

5. Water must not be left running.

6. Rooms must be ready for inspection by 8:40am except on Sunday, when they are ready by 10am.

7. Matresses should be turned each week.

8. At no time is a student to throw anything on the floor anywhere in the building, or to put anything behind the radiators, in the plants, on the grass, in the windows, or down the drainpipes.
9. Pictures must not be pasted on the walls, nor put up with nails. only pins and small tacks are to be used. Otherwise decorations are to be suspended from the moulding.
10. All necessary repairs, replacements, or changes in room equipment must be reported to the matron.
11. Nothing must be dried in rooms except hose, handkerchiefs, and silk underwear. These must not be dried on the furniture or hung in the windows.
12. Food must be kept in metal or glass receptacles.
13. Windows and curtains must be kept clean.
14. Clothes must not be washed in the lavatories or the bathtubs.
15. Girls are not to exchange keys among themselves, but must return them to and receive them from the Matron.
16. girls may not occupy a room or move from one room to another without permission from the Matron.
17. No furniture is to be moved from its regular place in one room to another room without permission from the matron.
18. No furniture is to be dismantled in any way.
19. Dirt is not to be swept into the halls.
20. Trash is not to be deposited in the utility closet, but is to be taken to the trashcan on the back stairway.
21. The main lounge is never used for dancing.
22. No one is to keep in her room any cleaning equipment belonging to the hall.
23. Students are not allowed to take trunks to their rooms, but must have them taken immediately to the trunk room, where they are to be packed an unpacked.
24. No equipment belonging to the dormitory may be removed from it without permission from the Matron.

1. Over-night guests must be registered with the Matron as soon as they arrive.
2. The charges are to be paid in cash and are as follows:

a. 25 cents per night for guest room or for clean bed linen.

b. 25 cents per meal except Sunday dinner, which is 50 cents. (Guests for meals must be reported to the Head Waiter)

3. All guests must abide by the rules of the dormitory.

1. Students are not allowed to smoke either on or off campus.

2. The penalty for smoking is dismissal from school.

1. All cases of lost or missing property must be reported at once to the Matron.

1. All cases of illness in the dormitory must be reported:

a. To the Matron

b. To the medical assistant in the dormitory, who cares for minor ills and calls the campus doctor when he is needed or desired.

2. A special slip must be procured from the assistant and filled out before meal-time for a meal that is to be brought to the room.