The Washington National Cathedral is an Episcopal Church that serves as the national church of the United States. A spiritual and social gathering place for people across the country and the world, the National Cathedral offers Episcopal and interfaith services, concerts, tours, and exhibits. The National Cathedral is an architectural marvel, standing as the second largest cathedral in the United States and the sixth largest in the world. Plans for the Cathedral were commissioned by George Washington in 1791, though construction did not begin until 1907. It was formally completed in 1990, with some work continuing on decorative aspects of the interior and in repairing damage from a 2011 earthquake. The Cathedral has been open throughout most of its construction, with numerous events of historical note taking place within its walls including memorial services, prayer services, speeches, political events, and inaugurations.

Washington National Cathedral was the site of state funerals for Presidents Eisenhower, Ford, and Reagan. 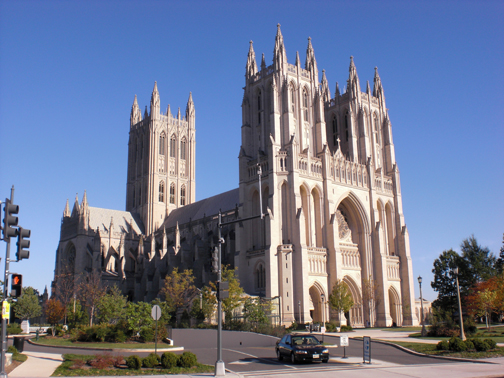 State flags hang from the nave of the Cathedral. Photo by Mina Elias, Wikimedia. 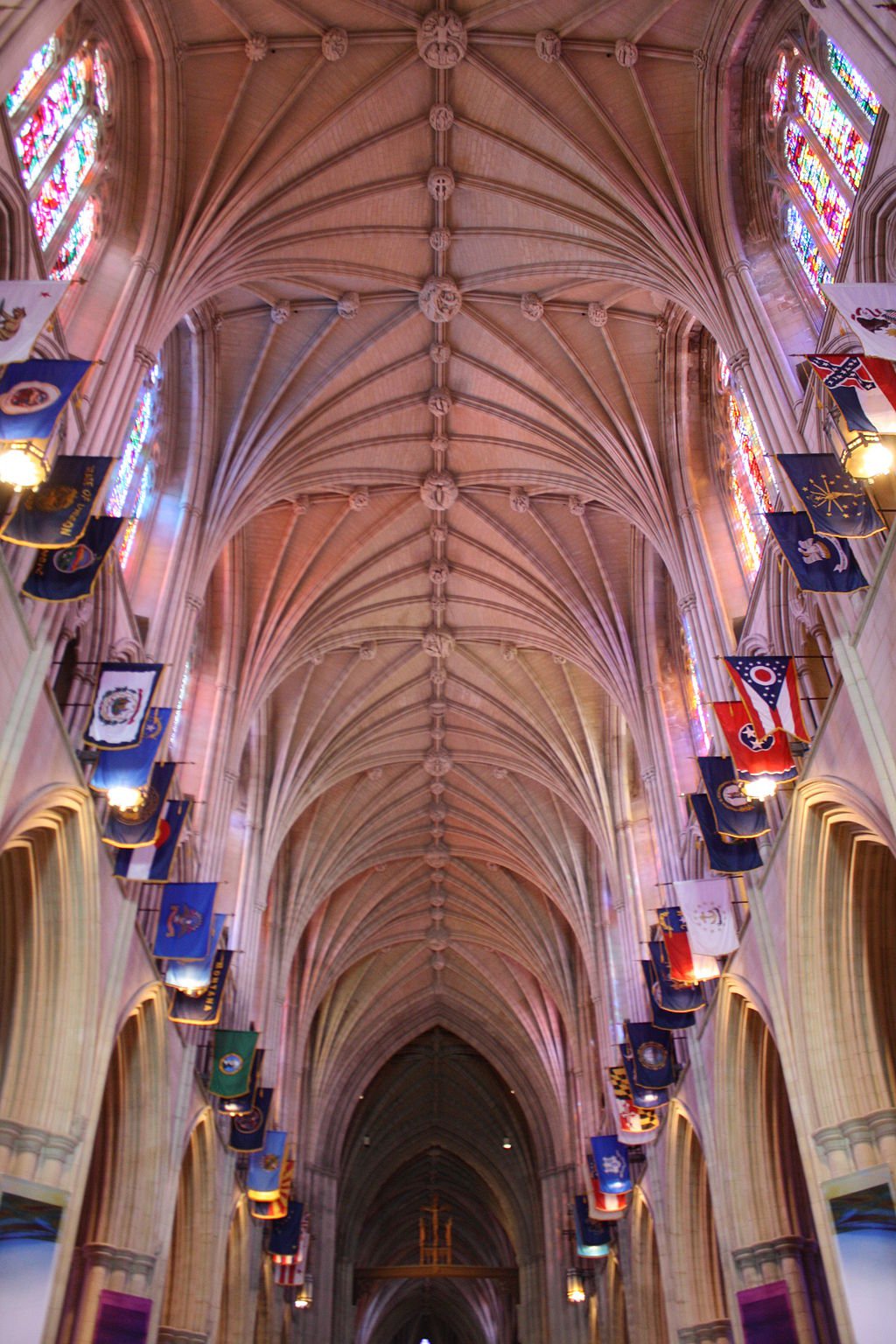 A statue of President George Washington, who planned the Cathedral, stands in an alcove where symbols such as his coat of arms can be found. Photo by Danvera, English Wikimedia. 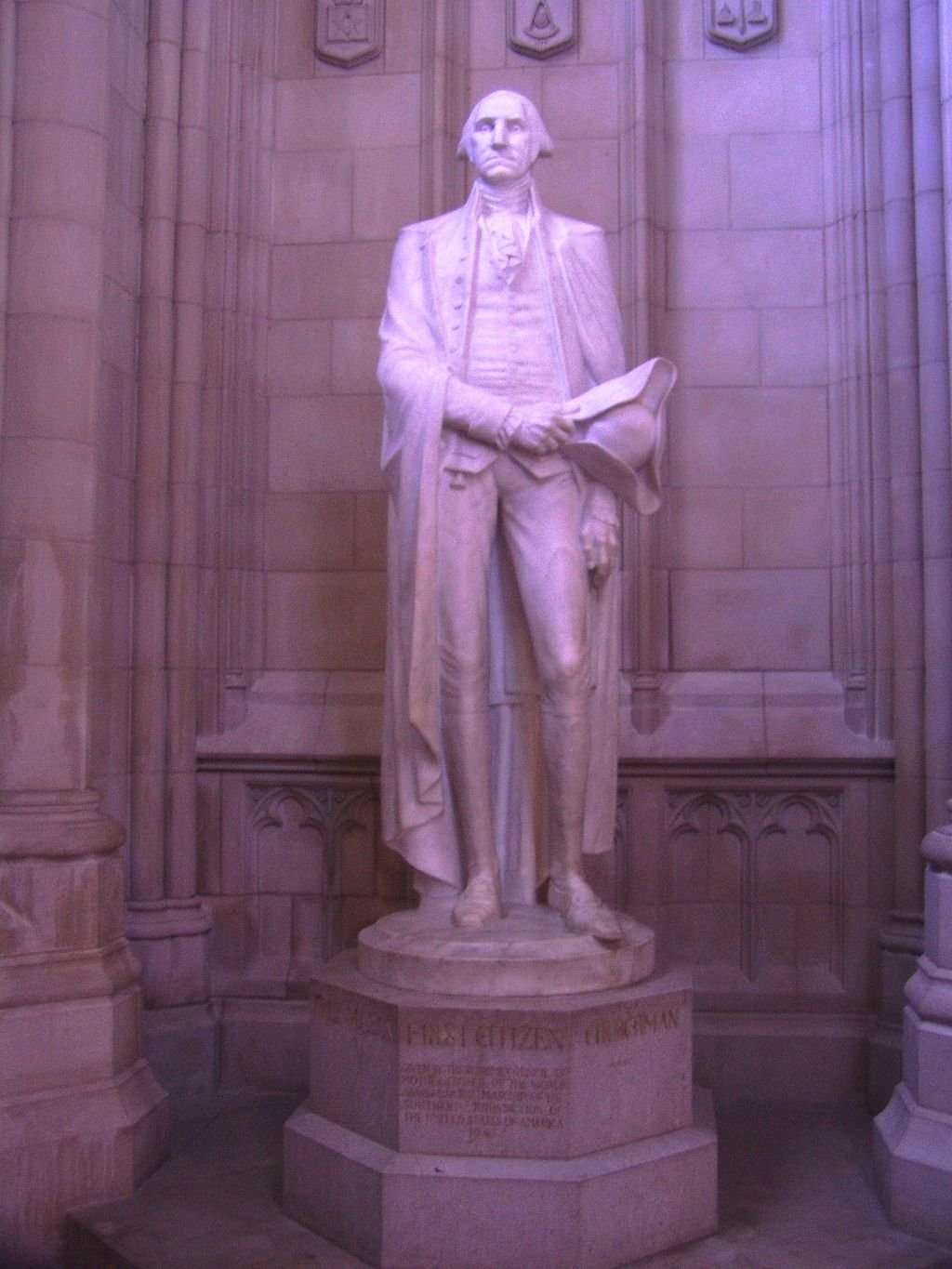 In 1791, George Washington selected his Major Pierre L’Enfant to create a plan for what was then the nation’s capital. In his draft for the capital city, L’Enfant also drafted a design for a church that could fulfill purposes on a national level. This plan did not gain any momentum, however, until 1893, when Congress gave the Protestant Episcopal Cathedral Foundation a charter that would allow for the construction of a cathedral and spaces of education.

In 1896, the Rt. Reverend Henry Yates Satterlee secured a spot for the Cathedral on Mount Saint Alban. The first stone of the Cathedral was laid on September 29, 1907, which signaled the beginning of the Cathedral’s construction. A majestic Gothic structure began to rise, its bell tower just over 300 feet tall. Throughout construction, it remained open and a center of spirituality for the nation. Construction was completed in 1990, and President George H. W. Bush was present for the finishing ceremony. In March 2014, work on the Cathedral began in response to a magnitude 5.8 earthquake in 2011. These efforts have involved repairing broken masonry and stabilizing the structure. The Cathedral received support from the National Trust for Historic Preservation's Save America's Treasures Program and a number of other sources.

Over the years, the Cathedral has witnessed historical moments. For example, the Cathedral was the site of three Presidential funerals and of Martin Luther King, Jr.’s last Sunday sermon. The Cathedral has also offered memorial services for leaders such as Eleanor Roosevelt and Nelson Mandela, and is the resting place of figures including President Woodrow Wilson, First Lady Edith Wilson, Helen Keller and Anne Sullivan. Initiatives at the National Cathedral also echo broader current events in the United States. Through prayers, programs, and events, the National Cathedral is a notable champion of veterans, LGBT and racial equality, interfaith dialogue, and efforts to end gun violence. For example, the Cathedral bells rang in celebration of the Supreme Court's June 2013 decision that recognized same-sex marriage. They also rang in mourning for each person who died in the October 2017 Las Vegas shootings.

The Cathedral carries on the traditions of Gothic architecture, with large towers, vaulted ceilings, pinnacles, flying buttresses, statues, gargoyles, grotesques, and stained glass windows. At the same times, these artworks tell a compelling story of United States history and values. Visitors to the Cathedral stand among statues of important figures including George Washington, Abraham Lincoln, Rosa Parks, Helen Keller, and Martin Luther King, Jr.  The Space Window depicts the wonders of science and technology and has a piece of Moon rock collected on the Apollo 11 mission embedded in the glass. Perhaps the most beloved work of art is a grotesque (bust) of Darth Vader from the Star Wars films. The Cathedral has also responded to representations of history in current events. Most notably, in August 2016, the Cathedral unanimously voted to remove images of Confederate flags from a stained glass window honoring Stonewall Jackson and Robert E. Lee. While the window currently remains in place, the National Cathedral is planning a replacement that can "adequately represent the history of race, slavery, and division in America." The National Cathedral, therefore, is very much a living document of American history that strives to include a variety of narratives.

The National Cathedral is open daily for Episcopal services and interfaith services through the year. Visitors can also take part in tours of the architecture, bell tower, and behind-the-scenes areas. Concerts celebrate holidays and music from around the world, while changing exhibits display artifacts and works of art. Gardens maintained by the All Hallows Guild also provide a beautiful outdoor space for contemplation and enjoying nature.