The Ether Dome, a part of Massachusetts General Hospital, is a surgical amphitheater and the site of the first surgery using anesthetic, or ether, in 1846. The successful use of general anesthesia during surgery was a major medical breakthrough. Today the dome is used as a teaching amphitheater, and is also open to self-guided tours. The dome is open to the public during business hours, Monday through Friday.

The inside of the Ether Dome includes seating for audiences and students, the mummy Padihershef on display, and an oil painting depicting the surgery commissioned by Massachusetts General Hospital in 2000. 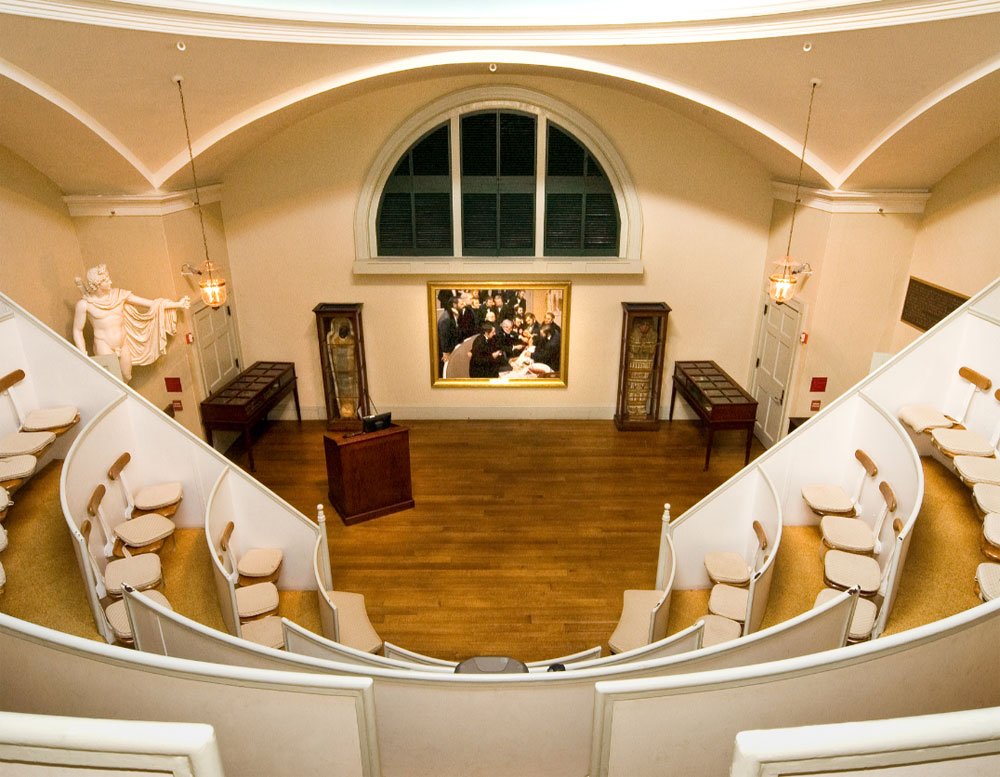 The Ether Dome is located on the fourth floor of the Bulfinch Building of Massachusetts General Hospital. The dome is a surgical amphitheater where the first public surgery using general anesthetic, or diethyl ether, was performed on October 16, 1846 in front of an audience of students and hospital staff. The administration of the ether was carried out by William T.G. Morton during a surgery in the dome. Morton was a former dentist and was a student at Harvard Medical School at the time of the surgery. As a dentist, the tooth extractions he had to perform were often hampered by the pain involved in the procedure. After studying the effects of ether and conferring with chemist Charles T. Jackson, Morton tested the use of ether as an anesthetic on a puppy; after administering the ether, the puppy lost consciousness, and Morton performed a tooth extraction on it without pain. Morton was invited by Massachusetts General Hospital to demonstrate his use of ether. However, Morton did not have a device that could be used to effectively administer the ether to the patient. He created an inhaler to use in his demonstration and was fifteen minutes late to the operation as a result. Following the surgery, Morton attempted to get a patent covering aspects of general anesthesia. However, he was largely denounced by his colleagues for the attempt, which they considered unethical. As a result, he lost the respect of others within his field, although this practice of patenting certain medical discoveries seems to have been somewhat common during this time.

The surgery was performed on Edward G. Abbott, who suffered from a tumor in his jaw. The surgery to remove the tumor was performed by John Collins Warren. The operation marked the debut of pain-free surgery; the audience was stunned that Abbott did not wake up and cry out from pain. This was considered a major breakthrough in the medical field. Other methods of eliminating pain during medical operations had been attempted before, such as opium poppies, mandrake juice, alcohol, and an herb from the nightshade family. “Laughing gas,” or nitrous oxide, was first introduced in 1799 by Humphrey Davy. This gas was also demonstrated at Massachusetts General Hospital by Horace Wells to try to eliminate pain during surgery; however, this attempt, which took place before Morton’s, was unsuccessful when the patient cried out in pain. Other methods used before ether included inhaling carbon dioxide (known as “suspended animation”) and hypnosis.

Ether was the most effective mode of anesthesia during this time period for several reasons. It did not have to be administered locally or intravenously (for which no method to do so existed at the time), it could be used at room temperature, it did not require special pressurized modes of storage or administration (which did not exist at the time), and was already familiar to physicians. Today, however, ether is not used by most physicians in the United States, due to new information about harmful effects and dangerous storage.

Over 8,000 surgical operations were performed in the Ether Dome between 1821 and 1868. Today, the dome is used as a teaching amphitheater and also operates as a museum. The dome has been designated as a national historical landmark. Some unique aspects of the dome include its architecture and the different artifacts on display. These artifacts include an authentic Egyptian mummy named Padihershef, antique nineteenth century surgical tools, a skeleton, and an oil painting depicting Morton’s surgery. The painting was commissioned by Massachusetts General Hospital’s service chiefs and physicians in 2000 and painted by artists Warren and Lucia Prosperi. In the painting, current physicians from the hospital, wearing traditional clothes and using tools from the time period, posed as the physicians and patient in the original surgery. The original chair from the surgery was also used in creating the painting. Padihershef the mummy, on display in the dome today, was also on display during the time of Morton’s surgery. The mummy was brought to Boston in 1823, along with its coffin, and was given to Massachusetts General Hospital to help raise funds to keep the hospital in operation.

The dome is open to the public Monday through Friday during business hours. It is also used for lectures and faculty meetings. Admission to the dome is free for visitors to go on self-guided tours.