William Howard Taft Memorial Bridge, formerly known as the Connecticut Avenue Bridge, was completed in 1907 in Washington, D.C. It extends Connecticut Avenue over Rock Creek Park and connects Woodley Park to the neighborhoods of Sheridan-Kalorama and Kalorama Triangle. It was the first masonry bridge in Washington, D.C. and was the largest unreinforced concrete bridge in the world at the time. The Taft Bridge is 1,341 feet long with seven arches, five of which are 150 feet wide and two are 82 feet wide. It was designed by George S. Morison, who appreciated the strength and persistence of concrete structures, and contains notable decorative elements including lamps with bronze eagles and four concrete lion sculptures known as the Perry lions. Renamed in memory of President William H. Taft in 1931, the bridge signaled an artistic era of building in Washington, D.C.

The Taft Bridge connects two neighborhoods separated by Rock Creek Park. Its arches are reminiscent of a Roman aqueduct. Photo by Michiel1972, Wikimedia. 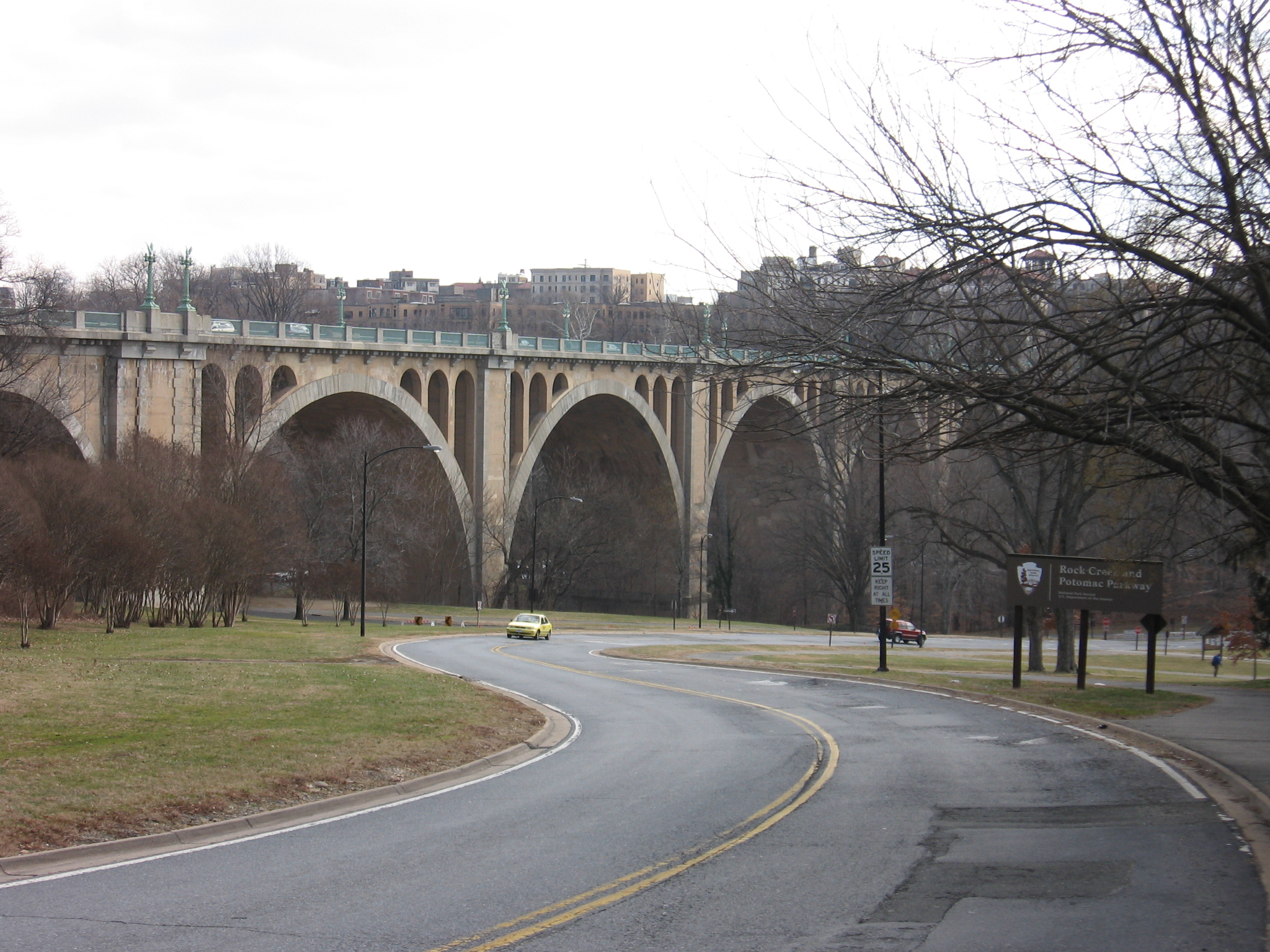 The decorative lampposts designed by Ernest C. Bairstow give the Taft Bridge a patriotic flair. Photo by AgnosticPreachersKid, Wikimedia. 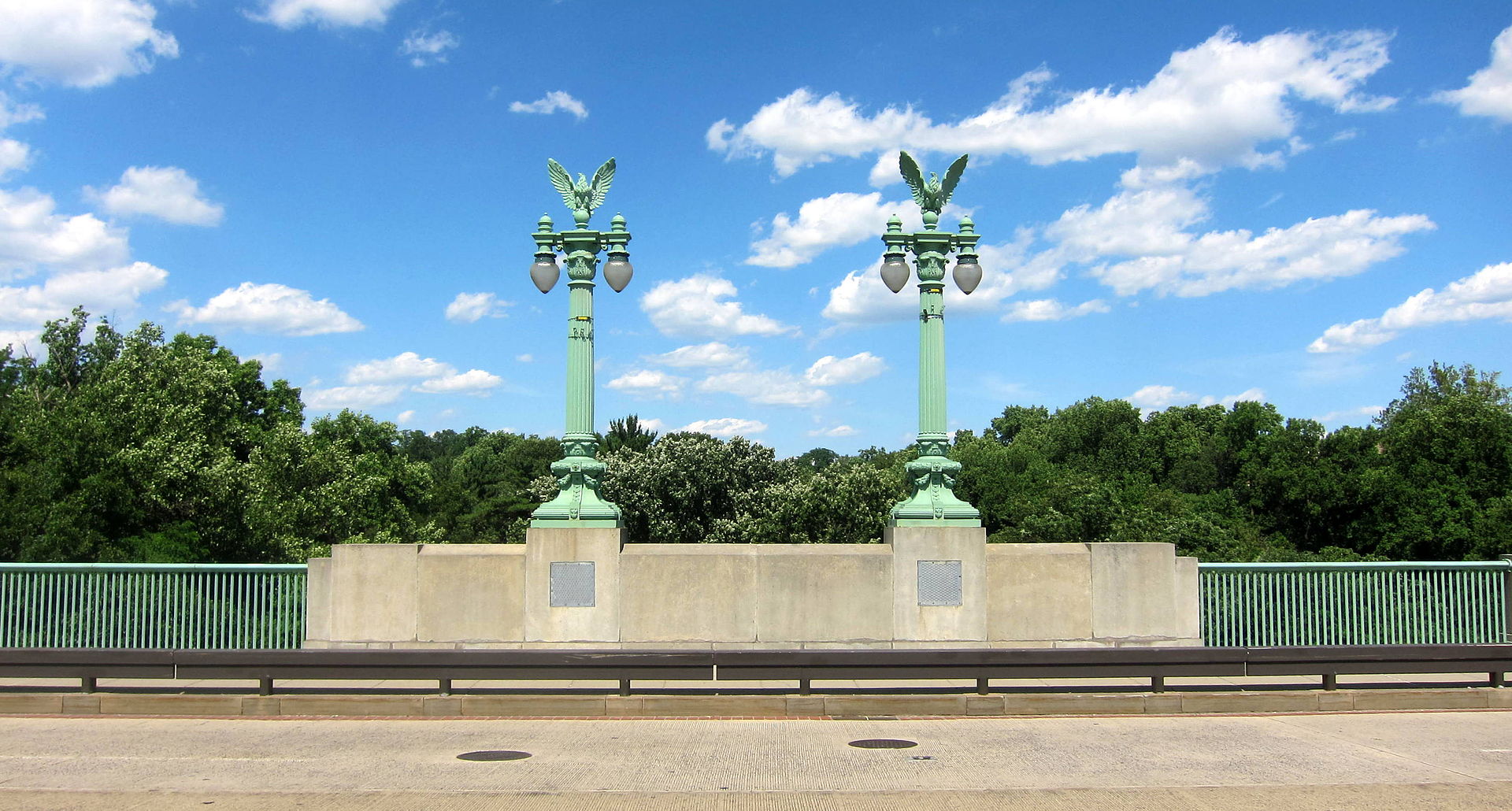 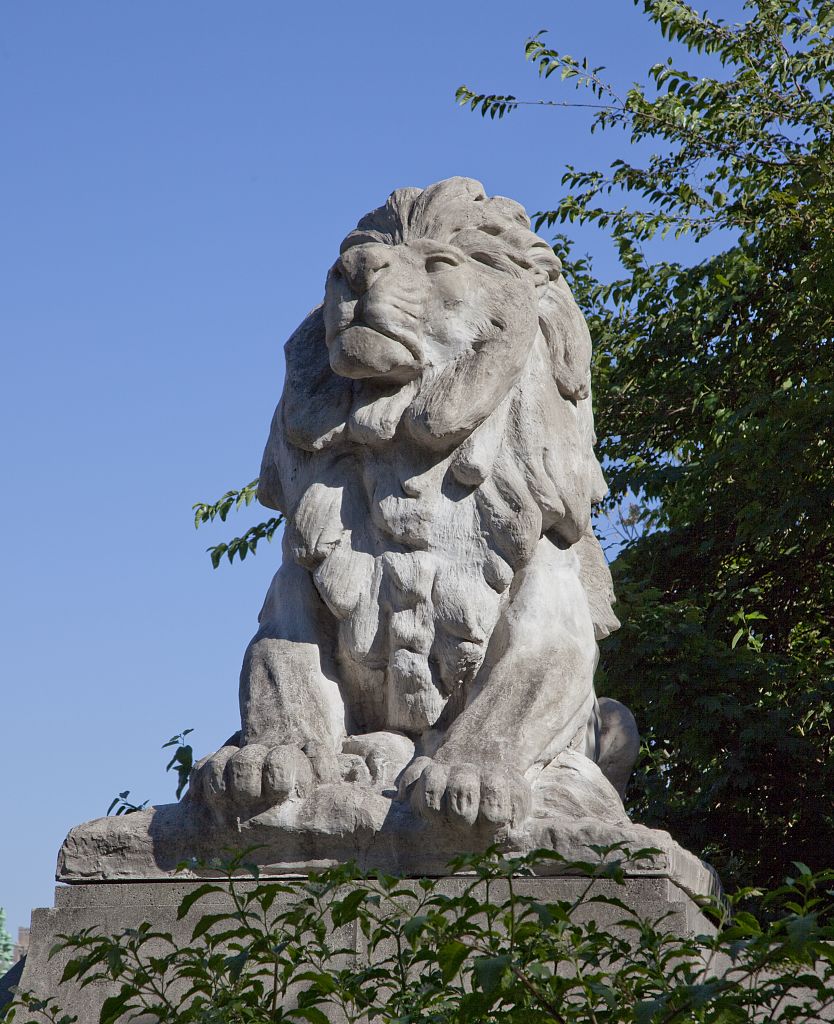 A detail in the stonework of the Taft Bridge. Photo by Carol M. Highsmith, Library of Congress. 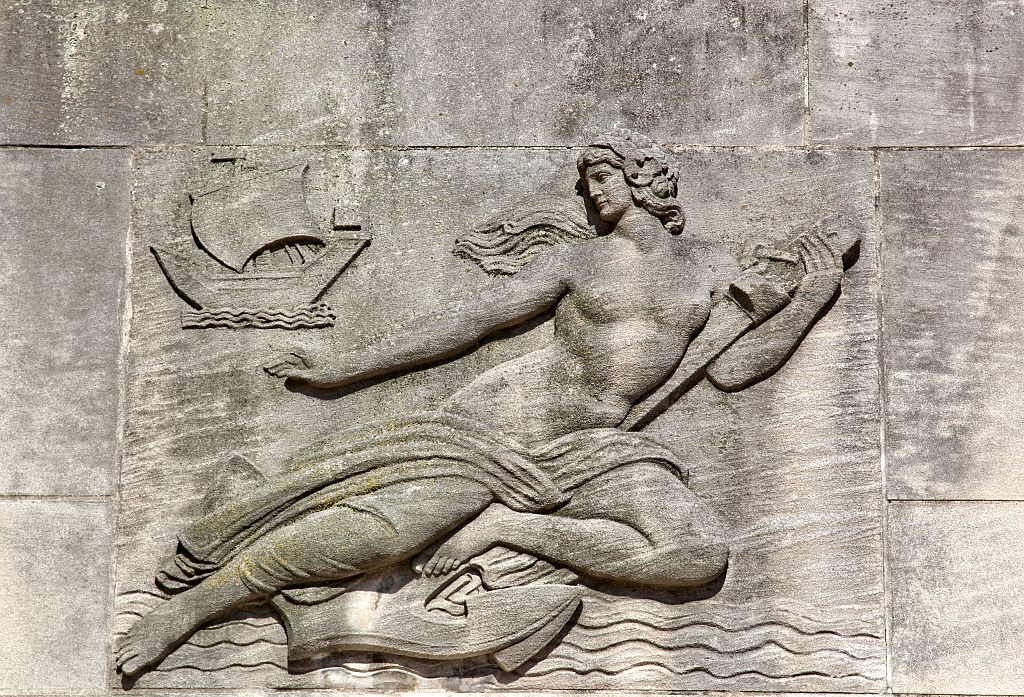 Completed in 1907, the Taft Bridge replaced a smaller and less attractive iron truss bridge. Photo by Harris and Ewing, Library of Congress. 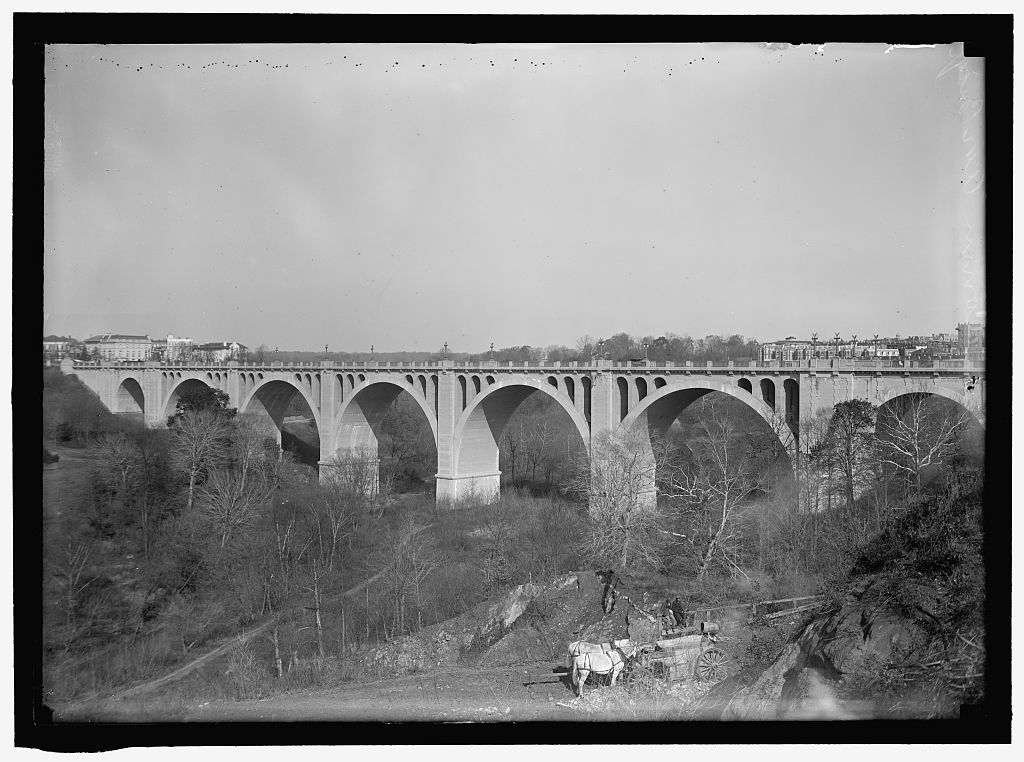 Though in the middle of a city, the Taft Bridge provides a view of Rock Creek Park's natural beauty. Postcard courtesy of Streets of Washington. 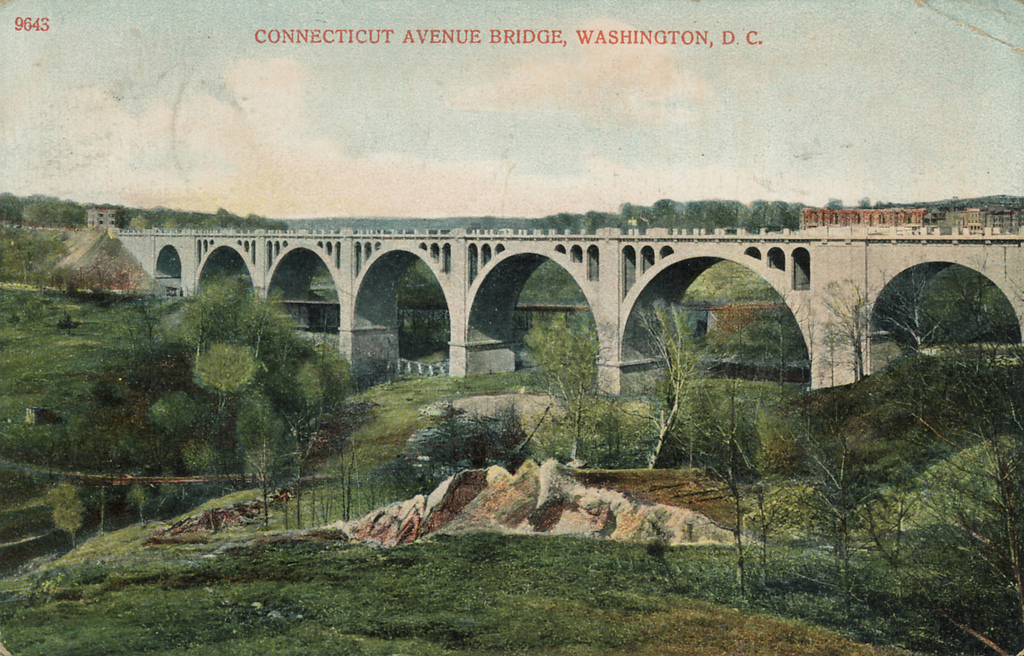 President Taft enjoyed walking along the sidewalk of the bridge that would later bear his name. Postcard courtesy of Streets of Washington. 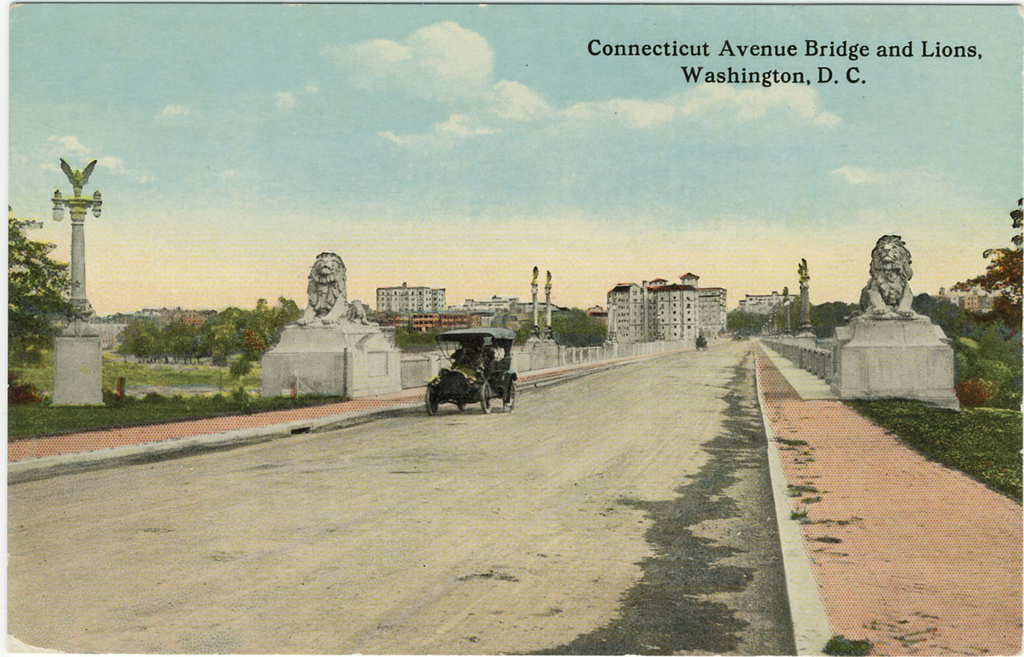 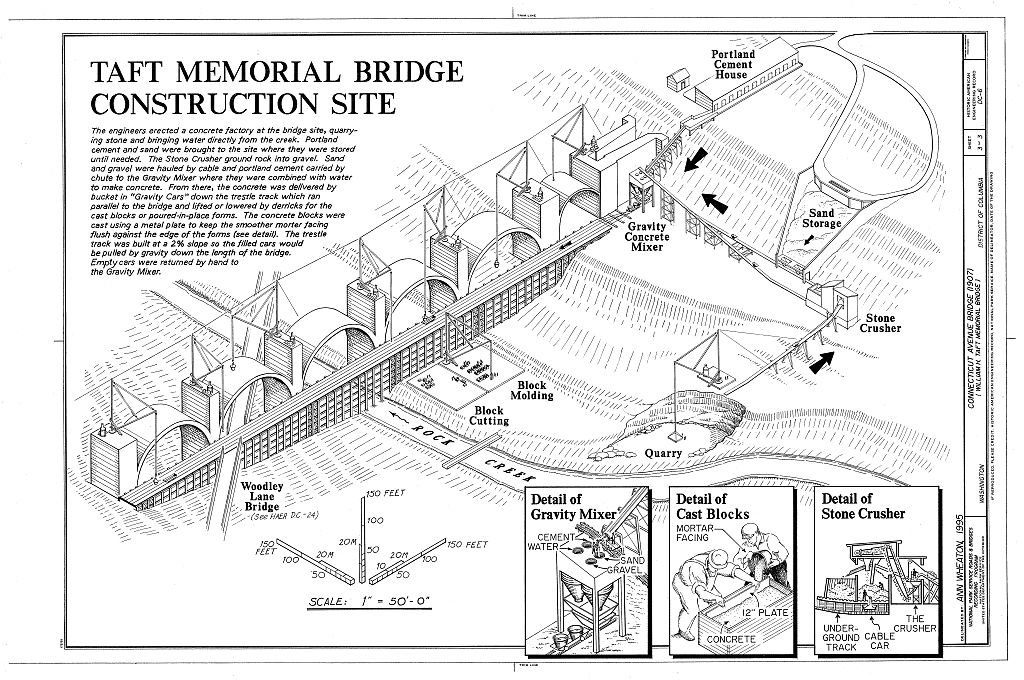 The William Howard Taft Memorial Bridge over Rock Creek Park, while perhaps not as iconic as monuments on the National Mall, has an important place in the pantheon of architectural and engineering feats of Washington, D.C. Constructed at the beginning of an important era of building in the city, the Taft Bridge embodies “the transition from utilitarian structures to artistic monuments,” according to the National Register of Historic Places nomination.

In the late nineteenth century, the outskirts of Washington, D.C. were rapidly developing and thoroughfares like Connecticut Avenue were extended and increasingly important. In 1888, an iron truss bridge known as the Woodley Lane Bridge carried Connecticut Avenue over Rock Creek Park. Yet less than ten years after its completion, the city determined this bridge was insufficient in both utility and design. Although metal bridges were popular, they were not seen as architecturally significant. In 1897, the city’s Bridge Division and the United States Congress held a competition to determine a winning design for a new bridge. Of the five designs submitted, they chose George Morison’s masonry proposal. A graduate of Harvard Law who found his true calling as a civil engineer, Morison designed nearly all of the railroad bridges over the Missouri River and was an active member of engineering societies and boards across the country. Edward Pearce Casey served as consulting architect for the bridge. Casey was a civil engineer by training and focused on government architecture, overseeing completion of the Library of Congress and designing the Continental Memorial Hall in D.C. and several Civil War memorials in D.C., Gettysburg, and Antietam.

Morison proposed a masonry bridge with nine arches (seven arches were built instead). Though more expensive than metal bridges, the masonry bridge design better reflected a larger and more symbolic vision for the nation’s capital. It would be the first concrete bridge in D.C. and the largest bridge in the world that did not use metal reinforcements, displaying the United States’ capabilities. Its materials, as well as its tall arches, paid homage to ancient engineering like the Roman aqueduct, following neoclassical architecture found in the White House and United States Capitol and predating neoclassical memorials such as the Lincoln Memorial. Morison came to favor concrete as a building material, admiring its permanency and grandeur. He wrote that masonry works “assume a monumental character, and enduring from one epoch to another, transmit to future ages the actual work of today; masonry [is] respected for its antiquity, admired for its enduring futurity.” The Taft Bridge, therefore, was an innovative, artistic feat with a practical purpose.

Construction began in 1897 by the Cranford Paving Company and the bridge was completed by the District Construction Company in 1907. The bridge uses pre-cast concrete blocks that were arranged together and the space between filled in with concrete. Workers built temporary wooden falsework underneath the arches and quarried stone nearby.  In addition to the arches, the decorative elements give the bridge distinct character. Sculptor Ernest C. Bairstow designed ornamental cast-iron lamps, costing $1,000 each and measuring 25 feet tall. Each lamp post includes two frosted globes and a bronze eagle with a wing span of more than four feet. Most famously, the bridge includes four concrete lion sculptures designed by Roland Hinton Perry. Between the masonry, timber, and decorations, the bridge cost $846,000 and earned the nickname “Million Dollar Bridge” until the Key Bridge was built across the Potomac River between Washington, D.C.’s Georgetown and Arlington County, Virginia.

The Taft Bridge earned the name of the twenty-seventh president in 1931, one year after his death. Taft, who had lived nearby, frequently strolled across the bridge. The suburban neighborhood of Woodley Park developed rapidly in the early twentieth century and increased traffic over the bridge. The roadway was widened from 35 feet to 40 feet in 1936. There have been numerous efforts over the years to retain the bridge’s character. The Commission of Fine Arts, established in 1910, rejected a number of proposals to run streetcar lines over the bridge. New bridges over Calvert Street (now the Duke Ellington Bridge) and Klingle Valley were built instead. In the 1980s, the Taft Bridge was among the few bridges in D.C. to not have suicide prevention fences installed, a controversial action that contributes to larger discussions about bridge safety and aesthetics. The Perry lion sculptures were restored in 1965 by Renato Luchetti, though weatherproofing proved only a temporary measure. The lions were removed in 1994, placed in storage, recast, and installed in in the summer of 2000. Bronze copies of the Perry lions also guard the entrance of the National Zoo.

Connecticut Avenue still crosses the bridge and the Cathedral Avenue, Beach Drive, and Rock Creek each pass under the bridge’s arches on the ground below. Rock Creek Park Trails also provide a lovely walk underneath the bridge. The Rock Creek and Potomac Parkway passes alongside the bridge and provides a panoramic view of its arches. The Taft Bridge remains an important transportation crossing and wonder of engineering in Washington, D.C.