This historic train depot was built by the former Gulf, Mobile and Ohio Railroad in 1911 to replace a station built in 1870. The city acquired it in 1995 and was restored by a joint effort of the Northport Historic Preservation Commission and the Black Warrior Model Railroad Association. It opened as a model railroad museum in 1999. Amtrak offers passenger service twice daily and Norfolk Southern Railway maintains an office in the building. 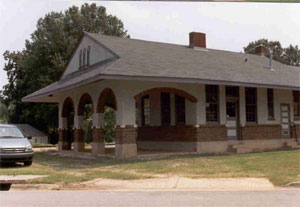 Shepherd, Scott. "Do You Know About The Northport Depot and Model Train Exhibit?" 953TheBear.com. July 13, 2016. http://953thebear.com/do-you-know-about-the-northport-depot-and-model-train-exhibit.