The R.T Cassell Cigar Co. began as a small cigar-making business in Jacksonville ran by two brothers. Since its humble beginnings in 1882, the R.T Cassell Cigar Co. flourished into one of Jacksonville's prominent business selling various cigars. Cassell's business sold included the "Short Run," "Big Run," "Cheerup," and "Leading Lady." One of their most popular cigars was the "Short Run" which is depicted in this mural and demonstrates the spirit of small businesses in Jacksonville.

R.T Cassell and his brother, Lyman, began their own cigar-making business in 1882. Their business demonstrates the power and initiative that small business had and continue to have in Jacksonville. This mural was painted by Mike Meyer in 2006. 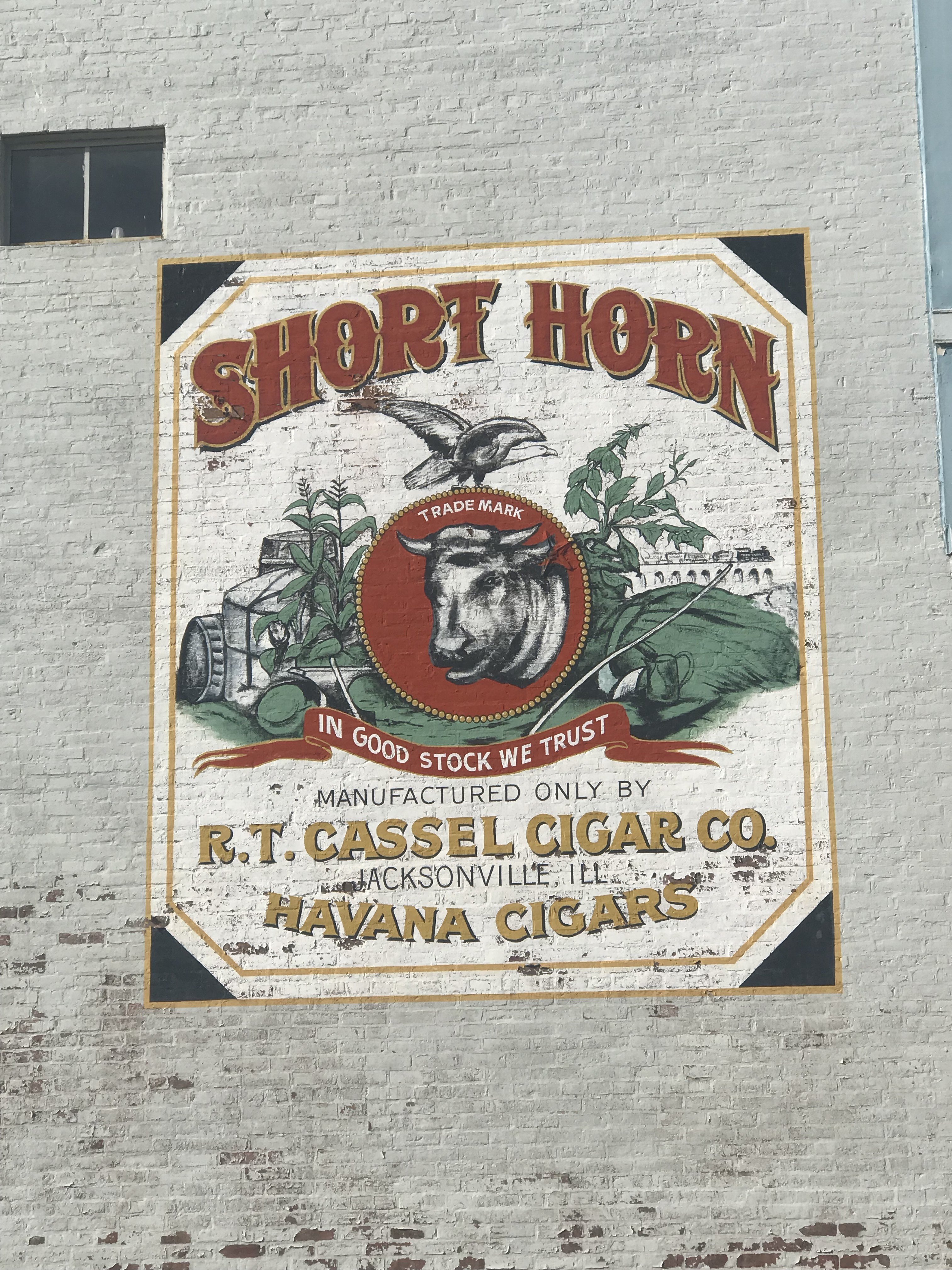 The artist of the Short Horn Cigar mural, Mike Meyer, perfectly captured the label of one of the more popular cigars that the R.T Cassell Cigar Co. manufactured and sold. In 1882, Robert T. Cassell and his brother, Lyman, opened their own cigar-making business in the back room a building which used to be where city park is now located.
Though the business had a modest beginning in the back room of a building, the journey for the location of the cigar business didn’t end there. The cigar company changed locations within Jacksonville a few more times. It began on South Main Street, relocated to West Side Square in 1896, and went back to being located on South Main Street in 1927.
Throughout the years, the R.T Cassell Cigar Co. manufactured and sold a variety of cigars such as the “Big Run,” the “Cheerup,” the “Leading Lady” which eventually replaced the “Cheerup,” and the “Short Run." The “Cheerup” and the “Leading Lady” were priced at five cents in the 1880s which would cost about $11 per cigar in 2017.
Of the different cigars the cigar company manufactured, the “Short Run” cigar and the “Big Run” cigar were the most popular ones. The “Big Run” cigar label was just as illustrative as the “Short Run” with various modes of transportation such as a sail ship, steamboat, express train, bicycle and the automobile. R.T Cassell’s success as cigar-maker in Jacksonville is struck by an unfortunate typo on the “Short Run” label which misspells Cassell’s last name on the bottom of the label as “R.T Cassel Cigar Co.”
In the spirit of supporting small businesses like R.T Cassell Cigar Co., stop by Frozen Penguin to buy some delicious frozen yogurt. If you would like to see Frozen Penguin's yogurt and topping selection, check out the link on this entry for more information.

During the summer of 2006, Jacksonville Main Street hosted a group of professional sign painters called Letterheads to conceive and execute heritage-based art projects throughout Jacksonville's historic central business district. The result was a collection of murals and sign projects that highlight the rich history of Jacksonville. The event, which a celebration of the arts and history, was dubbed "The Jacksonville Walldog Extravaganza." A Walldog was originally a sign painter who traveled throughout the country painting advertising on buildings in the early 20th century. Today, a Walldog is a nickname referring to the Letterhead sign painter who create murals in a similar manner.