The Gulf War Memorial "The Books of the Fallen" is a granite memorial made up of four standing open books. On the pages of these books, the names of fallen military men and women who lost their lives in the Gulf War, Afghanistan, and Iraq Wars are inscribed. The memorial was inspired by the death of PFC Brandon L. Davis, a native son of Cumberland who was killed in action in Fallajah, Iraq.

Views of the Memorial 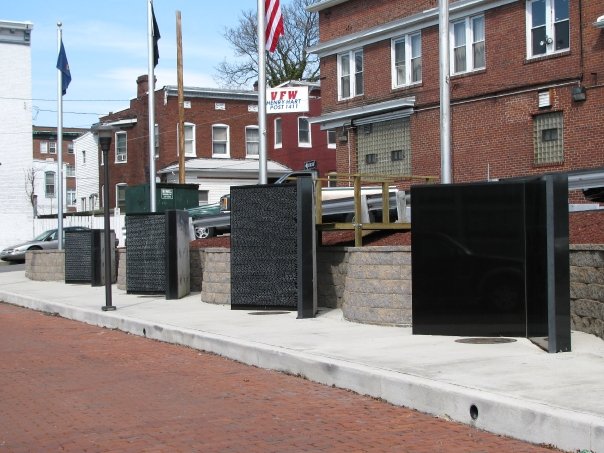 The "Books of the Fallen" Gulf War Memorial is the first memorial in the country to commemorate the service of military men and women who have lost their lives in either the recent Gulf War and wars with both Afghanistan and Iraq.  .
Inspired by the death of Cumberland native PFC Brandon L. Davis who was killed March 31, 2004 at the age of 20 when his armored personnel carrier ran over a bomb suspected of being remotely controlled in Fallajah, Iraq, the memorial receives no federal funding and is the result of community effort.  Cumberland American Legion Post 13 donated the grassy embankment on which the memorial sits.  The mayor and council donated all necessary permits and an extra 5-foot right of way and between $50,000 -$100,00 of labor was donated by members of the community.