Opened in 1928 under a different name, the Boston Opera House originally staged vaudeville performances and film screenings in the heart of Downtown Boston's Theatre District. Over the nine decades since its construction, the Opera House has had a complicated history featuring great highs and riddled with extreme lows. Throughout the 1960s, under the direction of expert opera impresario Sarah Caldwell, the Opera House staged some of the finest operatic performances anywhere in the world. Just three decades later, however, the building, plagued by mounting maintenance expenses, was placed on the National Trust for Historic Preservation's Most Endangered Buildings list, triggering a massive restoration project involving city and state officials. The Boston Opera House represents the city's prolific history in premier performance art as well as the City's commitment to historical preservation of Boston's rich heritage.

A view of the renovated interior of the Boston Opera House from the stage. © 2013 Geoffrey Goldberg Photography 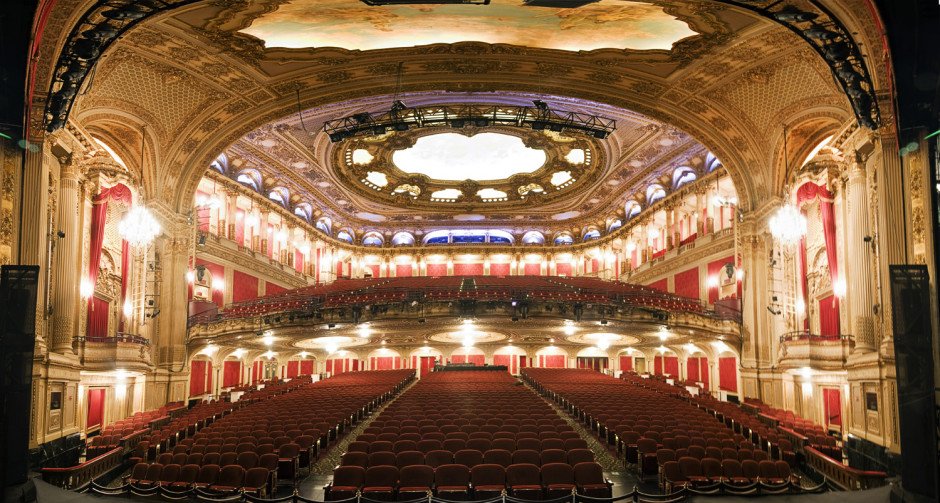 The City of Boston issued a permit to construct the building on December 3, 1925 in place of vaudeville impresario Benjamin Franklin Keith's Boston Theatre. Three years later, on October 29, 1928, the building was inaugurated as the B.F. Keith Memorial Theatre, a tribute organized by his partner, the playwright Edward Franklin Albee.

The building, inspired by French and Italian design, is one of the masterpieces of architect Thomas White Lamb. According to a 1942 obituary printed in the New York Herald Tribune, Lamb, a native Scotsman, had designed over 300 theaters across the world, 48 in Manhattan alone. Some of Lamb's other notable designs include the Regent Theatre and the Eltinage (now Empire) Theatre in New York City.

Over the course of the 20th Century, the Opera House changed hands—and names—several times. The original owners, the Radio-Keith-Orpheum company, sold the theater in 1965 to Sack Theatres. The new company renamed the theater "The Savoy Theatre" and extensively refurbished the interior to reflect the building's original grandeur. A second screening room was constructed, and the company operated the Savoy as a two-screen film house until 1978.

In August of 1979, the Opera Company of Boston took over ownership of the theater and changed the name again, this time to the Boston Opera House. Sarah Caldwell, an opera impresario and prestigious conductor was tapped to lead the theater in a new direction. Ms. Caldwell, the founder of the Opera Company of Boston, led in staging some of the finest operatic performances in the world at the time, including the American premieres of such works as Prokofiev's "War and Peace," Roger Sessions's "Montezuma" and Gunther Schuller's "Fisherman and His Wife."

Caldwell was well-known for two traits in particular. The first was her knack for pulling together complex and ambitious operatic performances under extraordinary pressure. The second was her infamous disorganization. Often insomnious and battling a host of persistent creditors, Caldwell's uneven leadership ultimately led to the downfall of her company and its propriety of the Opera House. Nevertheless, the success of her challenging performances in Boston led her to become one of the most respected conductors in the Northeast, if not the country. In the 1970s, she became the second woman ever to conduct the New York Philharmonic and the first woman in history to conduct at the Met.

Despite great artistic success during the Opera Company of Boston's ownership of the Opera House, it became readily apparent throughout the 1970s and 80s that the Company, and Caldwell, were not financially prepared to manage the maintenance the theater and meet its tax burden. Caldwell had estimated that a full restoration project would have cost $13 million, and the Opera Company of Boston was unable to finance the project. As a result, the theater's interior suffered, with paint chipping from the theater's opulent frescos and increasingly dysfunctional performance infrastructure.

In 1991, the Opera Company of Boston closed the Boston Opera House and sold it to Texas developers. Following the sale, Caldwell's company, insolvent from its mismanagement, closed its doors. Four years later, the Boston Opera House was placed on the National Trust for Historic Preservation's list of Most Endangered Buildings. The building was named the eleventh most endangered historical building in the United States.

A comprehensive restoration project was initiated in the early 2000s, spearheaded by then-Boston Mayor Thomas Menino, whose legacy includes supporting the restoration of several of the historic theaters on Washington Street in Downtown Boston. Mayor Menino facilitated the acquisition of the requisite permits to allow Clear Channel, a media entertainment conglomerate now known as iHeartMedia, Inc., to renovate the Opera House in 18 months, beginning in 2002.

Clear Channel gutted the entirety of the stagehouse to revamp it with state of the art infrastructure to accommodate Broadway touring productions. The company also meticulously restored the house, lobby, and facade of the building with the standards of the National Park Service and Boston Landmarks Commission in mind. The capacity of the theater was slightly downsized as the company redesigned the seating of the house to include more suitable sight lines for an improved patron experience. According to the Boston Opera House's website four pounds of gold leaf was added to the building, thirteen miles of new electrical wiring was routed throughout the theater, and 729 tons of steel supports the new stage infrastructure.

Restoration was completed in 2004, and the Boston Opera House opened anew on June 28, 2004 with a fitting vaudeville performance that acknowledged the buildings roots in the City's cultural heritage.