Dedicated on November 8, 1925, this statue memorializes the men from Milton who fought and died during World War I. Standing 20 feet tall, the statue is placed in between the Town Hall and the First Congregational Church along Canton Avenue. The memorial was sculpted by Daniel Chester French in 1925 and is made entirely of bronze and stands upon a granite base.

This statue was dedicated in 1925 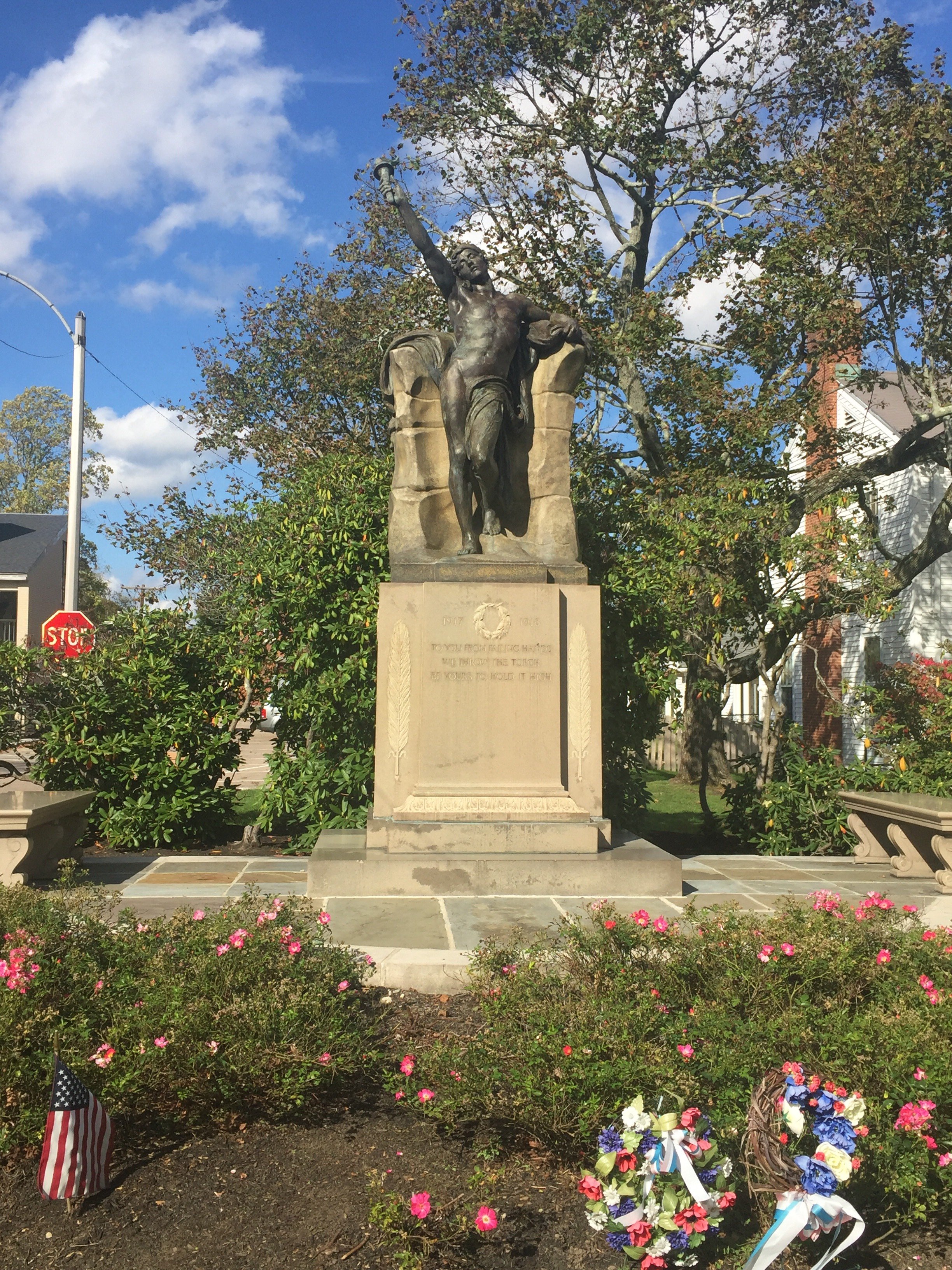 In Flanders Field is a memorial in Milton, Massachusetts dedicated to the men from the town who fought and died during World War I. The U.S. entered the war in 1917 to assist its French, British, and Russian allies against the Central Powers; the German Empire, Austria-Hungary, and the Ottoman Empire. Millions of soldiers and civilians lost their lives in the war and their memories have been preserved through memorials such as "In Flanders Field".

Made of bronze and standing 20 feet tall, the sculpture is named after the poem In Flanders Field by the Canadian poet named John McCrea. Engraved on the base is “To you from falling hands we throw the torch be yours to hold it high,” an excerpt from the poem. This poem was written during World War I and was published after McCrea’s death. After the German Empire declared war on Britain, Canada joined the war and McCrea was assigned to be a medical officer for the Canadian Field Artillery.

The sculptor is Daniel Chester French, one of the most acclaimed American sculptors of the late 19th and early 20th centuries. He was a founding member of the National Sculpture Society, whose purpose is to promote and preserve the welfare of American sculptors. Before his work on In Flanders Field, French had an esteemed reputation as a sculptor and had previous experience working on war memorials. His other works can be found across the country, and one of his most famous projects being the Lincoln Memorial in Washington D.C. Several of his other memorials can be found throughout Massachusetts, including the Minute Man in Concord and the John Harvard Monument in Cambridge.

Veteran’s Day services in Milton are performed at the memorial in honor of the fallen men, during which the statue is decorated with flags and banners. The memorial is part of the Milton’s Veteran’s Day Parade path. Milton takes pride in its history, with not only a memorial for the veterans of World War I but also a Civil War memorial commemorating those from Milton who served in the Union Army. Each year, the Milton Veteran’s Day Parade commemorates veterans and focuses on a particular group of veterans. For example, the 2017 service was centered around those who served in the Vietnam War. This is a special day for Milton as the town celebrates those who served not only served the town but also their country.

War memorials are an important part of remembering our nation’s history and honoring those who have fought for it. Although "In Flanders Field" was created to honor the men from Milton who fought in World War I, it represents an important era in American history while honoring the fallen World War I soldiers from Milton.