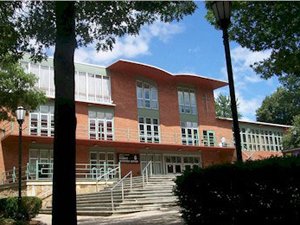 The Gunster Memorial Student Center at the University of Scranton was the main hub of student activity from its opening in 1960 to its closing and demolition in 2008. Planning for a new university student center began in 1958. The aim was to house activities that were at the time taking place off campus. Construction of the new student center began in 1959 with a nearly $1,000,000 budget and an estimated cost of construction around $900,000. The architectural design of the building was headed by the firm Bellante & Clauss, and construction was contracted by Gerard & Pettinato Construction Company. The building was completed in 1960 in time for the fall term, at a total cost of $1,030,000. At the time of its opening, the center contained an auditorium, ballroom, cafeteria, bookstore, lounges, a game room, and a rifle room. Future renovations would be needed to accommodate the growing student population.

As the Student Center and main location for student activities, the building hosted many theatrical events, many of which took place in the Eagen Auditorium. Events hosted at the auditorium included performances by the University Players, university music groups, and guest performances sponsored by the University. In December 1980, the student center was dedicated to Joseph F. Gunster, a St.Thomas College alumnus. In the 1990s, the student center received much-needed renovations to accommodate the usage of the University’s dining services by more and more students. More dining areas were added and existing dining services were revamped. The Student Center also contained a club-like hangout, called The Archives, that served as an all-day meeting place for students.

History of Public and Higher Education
Music and Entertainment History