The Crooked Creek Civil War Museum is a hands-on museum built on a battle site from the Civil War. The museum displays hundreds of authentic relics that visitors can handle and observe up close. Additionally, the museum has 40 acres of land where U.S. soldiers under the command of Colonel Abel Streight battled troops under the command of Confederate General Nathan Bedford Forrest in the spring of 1863. Streight's objective was to sever supply lines between Chattanooga and Atlanta by destroying key sections of the Western and Atlantic Railroad, but he was unable to secure this objective after being attacked by several divisions of men under the command of Forrest. Operating behind enemy lines, Streight surrendered owing to a belief that he was outnumbered. Visitors to the museum can also explore the area where this battle occurred. 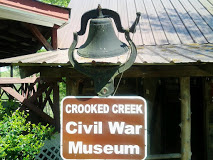 The grounds of the site contain holes in the ground where soldiers could have entrenched themselves for protection and visible bullet holes in large rocks. While Streight was an opponent of slavery, Forrest had been a notorious slave trader. During the war, Forrest regarded as a competent military leader and many white Southerners celebrated his capture of Colonel Streight's small army both before and after the Civil War. In fact, Rome Georgia erected a statue honoring Forrest in 1908.

Today, Nathan Bedford Forrest is best known for ordering or allowing his men to slaughter Black soldiers after they surrendered at Fort Pillow. After the Civil War, Forrest founded the Ku Klux Klan as a secret society for former Confederate soldiers. Members of the Klan launched waves of terrorist attacks on African Americans during Reconstruction as part of their attempt to reverse the outcome of the Civil War and return people of color to a status where they had no political rights or economic opportunity.

The Klan's wave of terror was temporary halted by the Enforcement Acts of 1870 and 1871 which empowered the government to arrest klan members and others who were terrorizing African Americans. Attorney General Amos T. Akerman, a former Confederate officer, rigorously enforced these laws. Like other former Confederate officers who upheld the Constitution on behalf of Black voting rights, Akerman was villainized by white Southerners in his own time and largely forgotten today.

Founded by Fred Wise, the museum opened in April 2006. Wise and his family maintains the museum and the surrounding land, making sure the signs of the battle are visible and preserved. Established from Fred's own collection and donations from others, the Crooked Creek Civil War Museum allows visitors to handle the artifacts and become familiar with Civil War history in a new way.