The beautiful Union Pacific Dining Lodge was designed by famed architect Gilbert Stanley Underwood. It was built in 1925 to serve passengers traveling to Yellowstone via the Union Pacific Railroad. Underwood was known for his rustic-style architecture, defined as a style that used native materials in proper scale, avoided rigid, straight lines, gave the feeling of having been crafted by pioneer craftsmen with limited tools, and achieved a connection to natural surroundings and to the past. Underwood's other accomplishments include the famed Ahwahnee Lodge in Yosemite National Park, the Timberline Lodge in Oregon, and the Old Faithful Lodge in Yellowstone. Little has been changed since this building was constructed, leaving a large, rustic space perfect for many types of events including weddings, quinceaneras, family reunions, corporate events, and more. The offices of the Yellowstone Historic Center are also housed at this address.

Historic photo of the Dining Lodge in use. 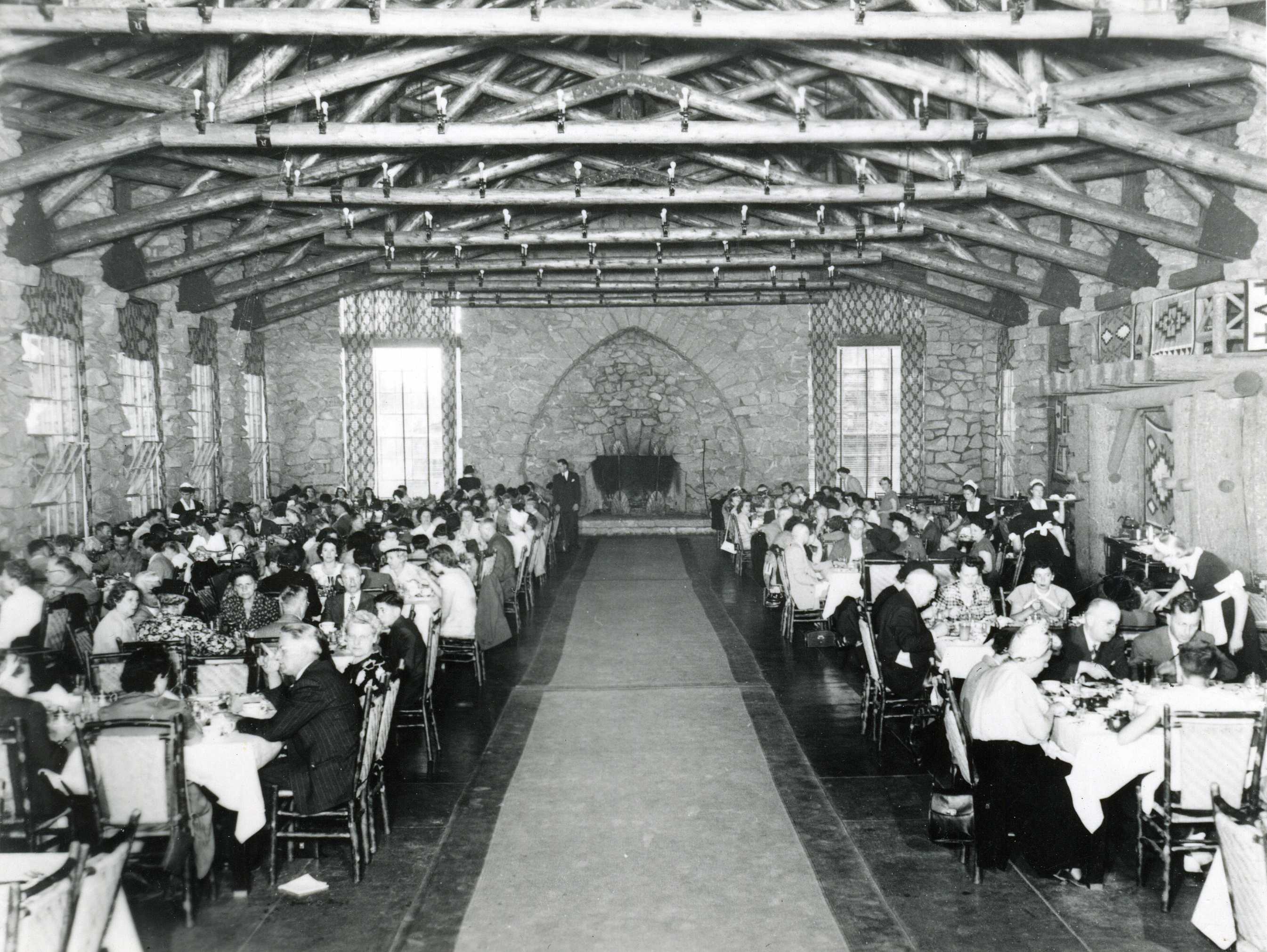 Historic postcard of the Dining Lodge. 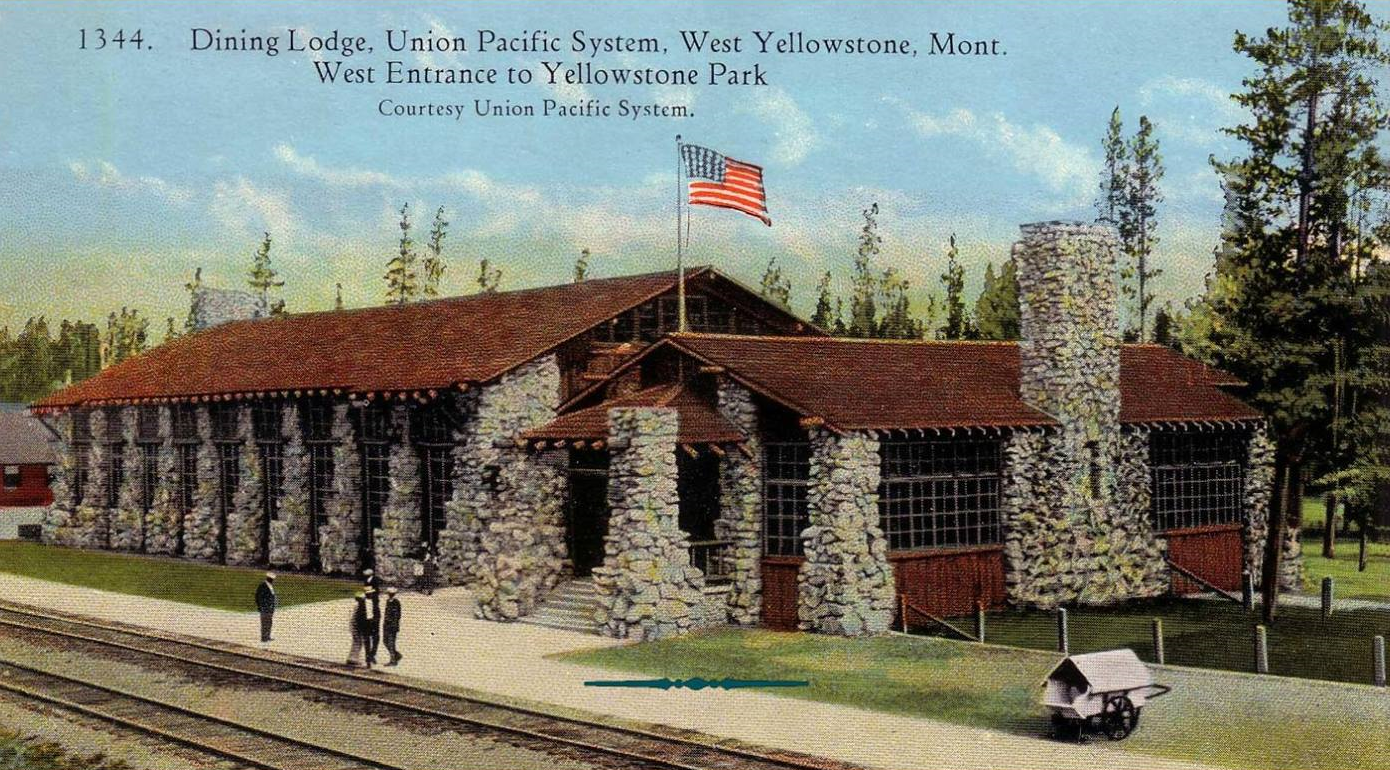 Historic photo of the Dining Lodge taken from the tracks. 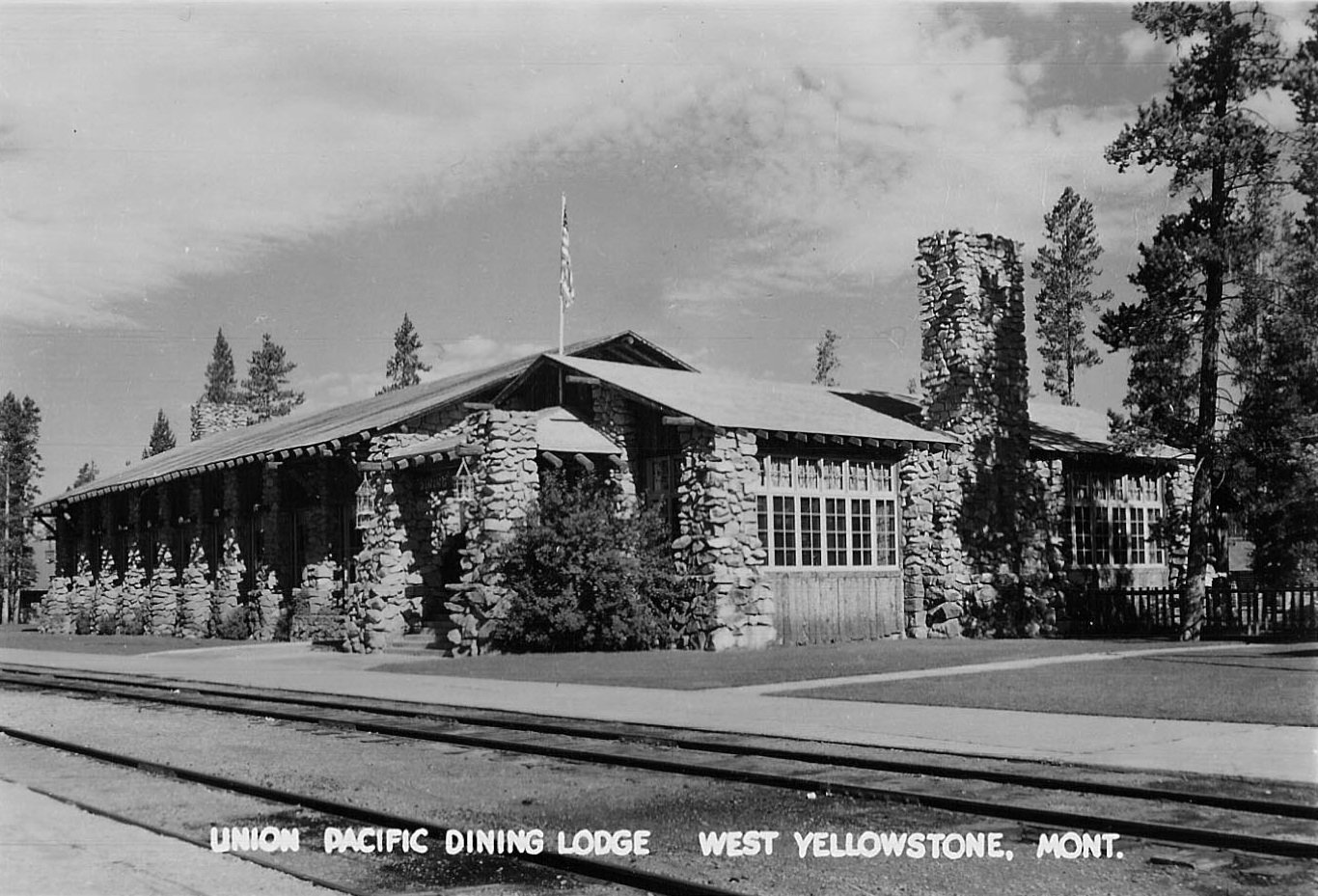 The first eating house known as "The Beanery" was constructed in 1908, approximately 1,000 feet west of the depot. The building housed the kitchen and the serving area.

By 1920, Union Pacific officials had recognized the need for better accommodations and schedules for serving meals to its customers. A Rest Pavilion was completed in 1922. This open-air shelter provided a place for travelers compelled to wait for a "second-seating" in the beanery. Located between the beanery and the depot, the rest pavilion was constructed of logs and shingles and was open-sided. The railroad also attempted to stagger the arrival time of trains into West Yellowstone so more people than the restaurant could handle would not arrive at the same time. When these tactics failed to adequately address the situation, the Union Pacific officials proceeded with plans to construct a new restaurant that could serve up to 350 guests in one seating.

In 1925, the Union Pacific hired architect Gilbert Stanley Underwood to design a new dining facility. Following his graduation from Harvard with a master's degree in architecture in 1923, Underwood worked closely with Daniel Hull, a planner and designer with the National Park Service Landscape Division. Together, they played a role in developing the NPS's "Rustic Architecture" style, defined as a style that uses native materials in proper scale, avoids rigid, straight lines, gives the feeling of having been crafted by pioneer craftsmen with limited tools, and achieves a connection to their natural surroundings and to the past. Among Underwood's designs are Yellowstone's Old Faithful Lodge and Yosemite's Ahwahnee Lodge.

The new Dining Lodge was completed in the fall of 1925, in time for the 1926 season. The lodge incorporated the rest pavilion, which became the Firehole Room at the east end of the lodge, serving as the lounge area. The dining hall incorporated a large central eating space (the Mammoth Room) with a massive, arrowhead-shaped fireplace, a kitchen large enough to prepare over 1,000 meals per day; a large service wing containing the employee dining hall, a bakery, butcher shop, scullery, linen room, coal room, manager's office, and walk-in refrigerators and freezers.

Modifications to the exterior of this magnificent building have been minor. In 1936, new entrance doors replaced the windows at the north end of the Firehole Room to provide direct access for tourists arriving street-side from train stations in Gallatin Gateway or Bozeman. These tourists came by way of bus from the Chicago Milwaukee & St. Paul Railway and the Northern Pacific Railway depots. The building sustained minor damage during the 1959 earthquake, mainly to rockwork around the massive fireplace and chimney at the west end of the building.

Major modifications were made to the interior of the service wing after the closure of dining service in 1960. Part of the wing is still a kitchen, while the remainder of this part of the building now houses public restrooms, government offices, and the Yellowstone Historic Center's main office.

In 2008, major renovations were made to the Dining Lodge after the Town received a $400,000 grant through the Save America's Treasures program and raised matching funds through a bond passed by the townspeople. The roof of the main part of the building was re-shingled and electrical service was upgraded.

The first passenger train arrived in West Yellowstone on June 11, 1908. A wooden depot and several businesses greeted the first visitors. Following the completion of the rail line, the Union Pacific Oregon Short Line turned its attention to constructing facilities for train operations and passenger care at its new terminus. This walking tour includes the old depot, baggage building, dining lodge, and more. The tour includes a stop at the Yellowstone Historic Center Museum, which is located in the old depot building.