The Olympic Pool, which opened on Memorial Day, 1954, served the citizens of Huntington with recreational entertainment, and even employment, up until its closure in 2000. Due to a decline in attendance, the city was unable to afford the level of maintenance and repairs to keep the pool in good working order, and a decision was made to close the pool in 2000. A volunteer effort reopened the pool in 2004, but after proving unsuccessful, the Olympic Pool closed yet again, and this time, was demolished. The site of the Olympic Pool, located along Memorial Boulevard, is now a vacant field, often used for youth soccer practices and games.

This photo, courtesy of the Herald-Dispatch, shows the thriving business of Ritter Park's Olympic Pool in the 1960s.1 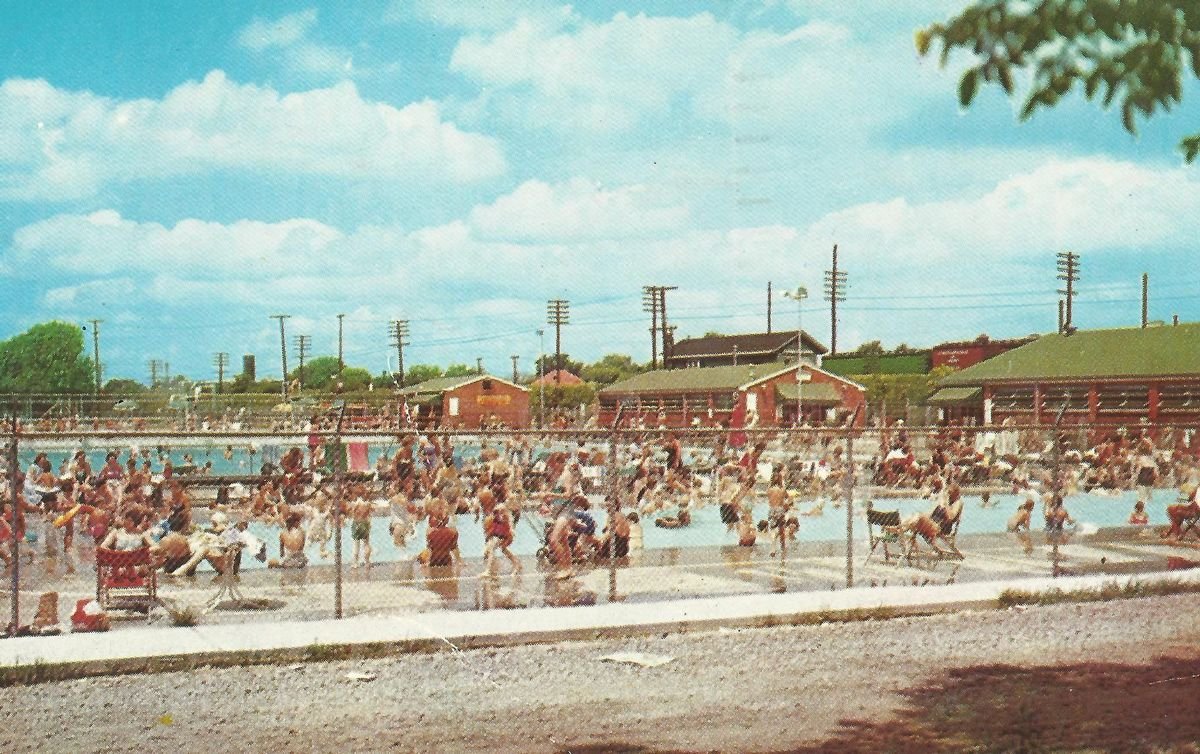 The Olympic Pool also consisted of a separate, open pool for swimming, seen in the back of the photo.2 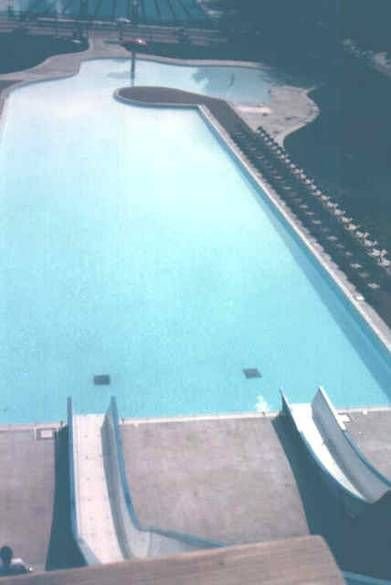 The Olympic Pool featured two slides and a mushroom, which sprinkled water into the pool. The slides were closed before the pool actually closed, due to injuries that occurred on the slides.2 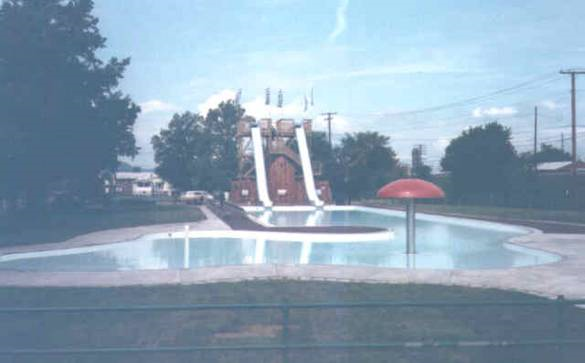 The Olympic Pool, formerly one of the many recreational sites of Huntington, was constructed in the early 1950s, and officially opened on Memorial Day, 1954, but not without many obstacles along the way. In 1945, many efforts had been made in an attempt to open swimming pools across the town of Huntington, West Virginia, but time and time again, the attempt ran into insurmountable obstacles. In 1950 the Women's Interclub Council in Huntington took on the project. This group of women was a leading force in the city and their arguments in favor of creating several swimming pools for the youth of the community attracted many supporters.
The Women's Interclub Council proposed that the costs for the pools be covered by a tax levy, which would span over three years. In this plan, over the three years, $400,000 would be raised for the construction of the swimming pools, one of which would be the Olympic Pool. The members of the Women's Interclub Council continually pushed for the creation of the pools in 1950, a time in history where many women often went unheard. That same year, in 1950, the WIC's proposal was approved for construction of several pools across the town of Huntington.1

After the levy tax had been completed and the funds had been raised, construction on the pools began. On Memorial Day, 1954, the series of swimming pools opened, including the Olympic Pool, which was named for its Olympic-size. Located on Twelfth Street West and Memorial Boulevard in Huntington, the Olympic Pool acted as a hot-spot for the youth in Huntington from the moment it opened. Complete with two slides, a sprinkling-mushroom, and concession stands, the Olympic Pool saw much-increased revenue within the 1960s through the 1980s. The Olympic Pool was also a favorite workplace for Huntington's youth; lifeguarding, cashiering, and food-prepping jobs could be found at the pool, and during the summer months, were mostly obtained by teenagers hoping to make some extra money.

Pool usage remained steady until the 1990s, when public pool usage across the country saw a precipitous decline While houses with pools became more common, much of the decline resulted from a youth that just preferred the indoors over the outdoors, even in the summer months. The decline in revenue occurred at a bad time, as the pool had been in commission for more than 40 years, and was in dire need of repairs. Unable to make the much-needed repairs, as well as unable to pay the staff and the bills, the Olympic Pool closed in 2000 after wrapping up its summer season. Unhappy with the closing of the pool, many volunteers combined their efforts and rallied for the reopening of the Olympic Pool. Under the volunteer efforts, the Olympic Pool reopened in 2004, only to be closed again and completely demolished in 2006. Today, the vacant field is used for soccer practices, game, and various activities.