This marker found at Milestone 46 of the Mason Dison line is found between the towns of Maryland Line, Maryland, and Shrewsbury, Pennsylvania. This actual marker was not erected until 2015 by Maryland Historical Trust-Maryland State Highway Administration, however, the original milestone was laid by the surveyors when they established the line. The boundary between Pennsylvania and its border states of Maryland, Delaware, and West Virginia. English surveyors Charles Mason and Jeremiah Dixon established this border between 1763 and 1767 to settle disputes between the proprietors of Maryland and Pennsylvania/Delaware. Each mile of this border was then marked with a carved stone brought from England. The stone at this mile is not that special but every five miles there is a milestone that has the coat of arms of the Penns on one side and the coat of Baltimore on the other.

Historical marker located at the border between Maryland and Pennsylvania, The Mason and Dixon Line. 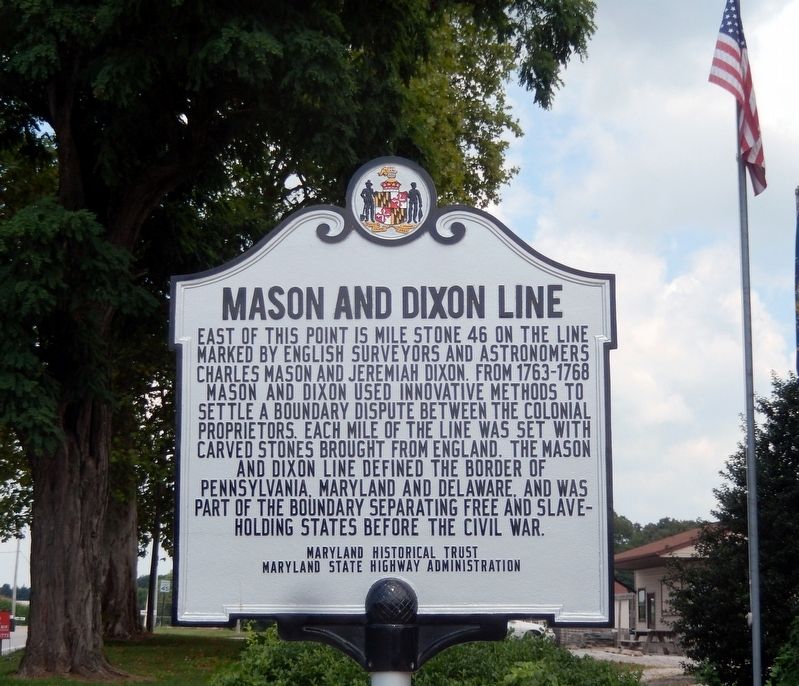 Between 1763 and 1767 the 233-mile (375-km) line was surveyed along the parallel 39°43′ N by two Englishmen, Charles Mason and Jeremiah Dixon, to define the long-disputed boundaries of the overlapping land grants of the Penns, proprietors of Pennsylvania, and the Calverts, proprietors of Maryland. The dispute arose over conflicting claims to the territory from the Delaware River westward. In 1632 King Charles I had granted Cecilius Calvert, 2nd Lord Baltimore, a charter to establish a colony north of Virginia to that point “which lieth under the Fortieth degree of north latitude” and westward to the source of the Potomac.

In 1681 Charles II granted William Penn the area between 43° N and a line extending westward from “a Circle drawne [sic] at twelve miles distance from New Castle…” to “the beginning of the fortieth degree….” In 1682 Penn then received a grant in the Delaware peninsula, which Lord Baltimore claimed. In 1685 the crown ordered that territory to be divided equally, the western half going to Baltimore. After years of bitter controversy, in 1750 British Lord Chancellor Hardwicke ruled that the southern boundary of Pennsylvania should be a line running westward from the point at which the line dividing the Delaware peninsula was tangential to a circle with a radius of 12 miles from the center of Newcastle.

Mason and Dixon resurveyed the Delaware tangent line and the Newcastle arc and in 1765 began running the east-west line from the tangent point, at approximately 39°43′ N. Along that line the surveyors set milestones brought from England, with every fifth stone in the eastern portion being a “crown stone” bearing the arms of Penn on one side and of Baltimore on the other. The line was completed in 1768 at a cost of $75,000. In 1779 Pennsylvania and Virginia agreed to extend the line westward to a point five degrees from the Delaware River, a line running north from that point to be the westward boundary of Pennsylvania.

This line was seen as the boundary between the slave owning and free states prior to the civil war and is now seen as the division between the North and South. This exact marker is located at the 46th mile stone. This is in Maryland line, Maryland, and is in the middle of the border between Maryland and Pennsylvania.