Shawnee State Park and the Shawnee State Forest lie within an area that was the former hunting grounds for the Shawnee Indians. The park and the forest are located in Scioto County, Ohio. The total area of the park and the forest combined is equal to 63,000 acres of land. The Shawnee Indians started to become displaced during the 1700s by settlers who were building cabins and clearing land in the area. Although, the look of the area had changed over the years, the state's Division of Forestry has been successful in returning much of the area back to its original look. In 1922, the land was acquired for the park and it was first known as the Theodore Roosevelt State Game Preserve. There were six Civilian Conservation Corps camps located there in the 1930s. When the Ohio Department of Natural Resources and the Division of Parks and Recreation were introduced in 1949, the area became a state park and state forest. In the early 1970s, the park's name was changed to Portsmouth State Park. The park was eventually renamed to Shawnee State Park. 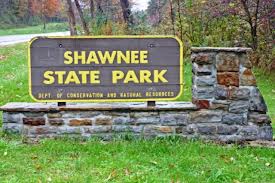