This was the house where legendary actor Clark Gable was born and it now serves as a museum that features artifacts and memorabilia from the life of a man who was known as "the king of Hollywood" during his life. The home has been furnished to the style of home it would have been back when Gable lived in it. It features everything from his childhood sled even to a 1954 Cadillac that Gable once owned.

The childhood home of Clark Gable is now a museum that preserves and shares his historic career. 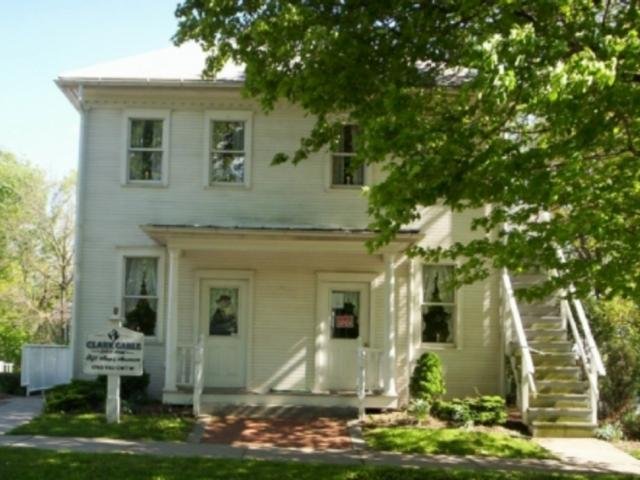 Clark Gable was born on February 1, 1901 in the small town on Cadiz, Ohio. He was named after his father and his mother died when he was ten years old. He then moved to live with his uncle for a while in Vernon Township, Pennsylvania. In his youth, he would recite Shakespeare. He then began to take acting lessons under the study of Joesphine Dillon who took them both to Hollywood.
His first real work was as an extra on silent films such as The Merry Widow (1925), The Plastic Age (1925), Forbidden Paradise (1924). His first role in a sound picture was as a villain in the film The Painted Desert (1931). He was a costar to Joan Crawford in Dance, Fools, Dance (1931). In his last supporting role in his career, he played as a gangster in the movie A Free Soul (1931). In 1939, his biggest hit was his role in Gone with the Wind in which he was nominated for a best actor Oscar.
In 1942, Gable joined the U.S. Air Force. He was promoted to major before the end of WW2 before he was relieved of active duty. He continued making films after WW2, but took a time of rest before he continued filming. He had two children, a girl named Judy and a son named John. Gable died on November 16, 1960 ten days after he had a heart attack at the age of 59.