This historical marker commemorates the First Battle of Mesilla, a Civil War skirmish that pitted pro-Confederate residents against federal troops stationed at Fort Filmore. Pro-Confederate residents of the territory declared Messila their capital and began conspiring to seize control of the area leading to this battle on July 25, 1861. Confederate forces were victorious in the skirmish and followed the battle with the official declaration of the existence of a Confederate government of Arizona Territory which included the southern area of the New Mexico Territory. The Confederate victory was short-lived as federal troops responded with a counter-attack and forced the secessionists from Mesilla the following summer. The historical marker discusses the 1861 skirmish and the Second Battle of Mesilla in June, 1862, that allowed the Union to gain control of Messila.

The First Battle of Mesilla occurred between Confederate and Union troops on July 25, 1861 in present day New Mexico. 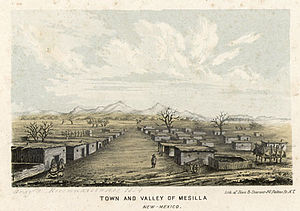 Lieutenant Colonel John R. Baylor led the Confederates into victory at Mesilla in 1861.

Mesilla became the capital of the Confederate Arizona Territory 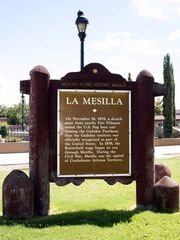 Baylor feared the Union forces at Fort Fillmore (pictured here) would attack pro-Confederate forces along the western Texas frontier so he organized an attack on them first. 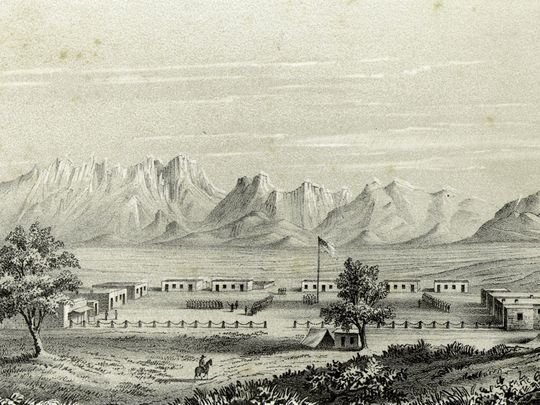 Residents of the western territories typically supported the Union. However, many of the families of this area had lived in the American South and not only favored the Confederacy but hoped to join the Confederate States of America and practice slavery. With many of the people living in these territories divided, and with political leaders also dividing on the question of slavery and secession, a victory by pro-Confederate forces might inspire more residents of the territories to support the South.

After Texas seceded from the Union in 1861, a battalion of the 2nd Texas Mounted Rifles led by Lt. Col. John R. Baylor was ordered to occupy several forts that were located on the west Texas frontier. Confederate leaders supported Baylor's desire to invade New Mexico to attack Union forts near the Rio Grande if he believed it was necessary to do so. Baylor believed the Union troops at Fort Fillmore in New Mexico would attack and that he should do so before they could.

On the night of July 23, 1861, Lt. Col. John R. Baylor and 300 men left Fort Bliss and marched to Fort Fillmore, New Mexico, arriving in Mesilla on the night of the 24th.  Accompanying Baylor were two companies of the 2nd Regiment of the Texas Mounted Rifles, a Texas light-artillery company, an El Paso County scout company, and regular citizens. Originally, Baylor was going to carry out a surprise attack on the Union forces at the fort but one of the Confederate troops betrayed them and warned the Union forces. Many of the residents of Mesilla supported the Confederate raiders and shortly upon his arrival, Baylor was met by a company of Arizona men who joined his ranks.

The following day Major Isaac Lynde and 380 Union infantry and mounted riflemen and howitzers, marched to Mesilla from the south. When Baylor refused to surrender, Lynde told his men to open fire on the Confederate forces.  Lynde wanted his infantry to advance but the geography of the land prevented them from doing this so Lynde told his cavalry to charge the Confederate forces. The charge was clumsy and many of the Union troops were shot, weakening the attack further. The two sides fired back and forth a little longer until Lynde ordered a retreat to the fort with Confederate forces and Arizona citizens chasing after them. There is a debate on how many casualties each side experienced, but it is estimated that three to thirteen men were killed. Two officers and four other men received injuries on the Union side while the Confederates had two men killed, seven others suffered from injuries, and 20 horses killed.

The following night Baylor sought reinforcements as his men prepared to attack the fort the next day. That same evening, Baylor’s men seized 85 of the Union’s horses cutting off their main mode of transportation. Suspecting the looming Confederate attack, Lynde’s men deserted Fort Fillmore once they ruined the ammunition and supplies in the citadel. However, the Confederate forces had possession of the quickest path of retreat (north heading to Fort Craig, New Mexico) so the Union forces went northeast heading to Fort Stanton through the Organ Mountains. Rather than using their canteens to hold water for the march through the desert and mountains, the Union troops filled them with medicinal whiskey from the fort. The next day, the Confederates caught up to several of the Union troops who had fell behind and on July 27, dehydrated and down to 100 men, Lynde’s forces had no other choice but to surrender to the Confederates at San Agustine Springs.

On August 1 Baylor announced the creation of an official Confederate Arizona Territory which included the part of the New Mexico Territory that was south of the 34th parallel north. Baylor named himself the military governor and governed under martial law.  The Confederate victory paved the way for Henry Hopkins Sibley’s New Mexico Campaign in February of 1862. The Confederate victory was short lived however, when the Second Battle of Mesilla resulted in a Union victory in June of 1862 and the Confederates left Mesilla on June 7, 1862. Despite the Confederacy’s short-lived victory here, Baylor became a folk hero among pro-Confederate families in the area for his leadership in the First Battle of Mesilla.