This historic courthouse located in San Marcos was built in the Classical Revival style and completed in 1908. The building is recognized by both the National Register of Historic Places and Texas Historical Commission. 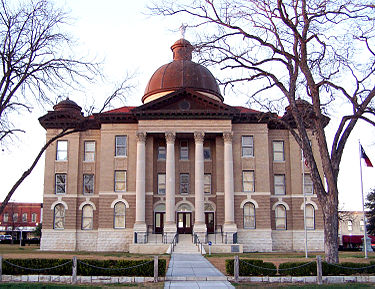 From the historic marker:
"When Hays County originated in 1848, its one public building was a log church-schoolhouse that had to serve as the courthouse, along with its other uses. Although the San Marcos townsite, platted in 1851, contained a court square donated to the county, the forfeiture of a $2,000.00 criminal bond later gave the county funds for building, and in 1861 officials employed contractor C. F. Millett to erect on the Square a 36 x 40-foot, 2-story frame courthouse with a hearing room, jury rooms, and 4 offices. That pine building burned in 1868, and county officials operated from rented quarters until a courthouse of soft, locally quarried limestone was completed in 1871. Damaged by earth shiftings, that 2-story, 45 x 53-foot building was razed (1881) and replaced by a 50 x 60-foot, 2-story building of harder limestone designed by F. E. Ruffini, architect for University of Texas buildings and for courthouses in several other counties. After that 1882-83 structure lost its top story in a fire on Feb. 28, 1908, it also was razed. The fourth and present courthouse, in eclectic style, was designed by C. H. Page & Brother, of Austin. Completed and accepted by the county court on Dec. 13, 1909, it has had interior alterations; it was restored in 1972."

This walking tour starts near the historic Hays County Courthouse and moves south along Guadalupe Street. Highlights of the tour include the former city hall, Lyndon Baines Johnson Museum, the Old State Bank Building, and several sites, cultural centers, and museums that share the history of San Marcos and its diverse peoples. The tour only includes stops near Guadalupe Street but visitors to the city should also check out the nearby Charles S. Cock House and Dick's Classic Car Museum.