The red brick, Italianate Tamaqua Railroad Station was built in 1874 by the Philadelphia and Reading Railroad. An addition was added in 1880 and a freight house attached in 1885. It was used as a stop over as passengers traveled from Williamsport to Philadelphia and other eastern cities. The last passenger train left the station in 1961. It was abandoned in 1980 and damaged by fire in 1981. It then survived numerous demolition threats and was eventually restored through the efforts of both the Tamaqua Historical Society and the Tamaqua S.O.S (Save our Station). It is now a heritage center and host of the Tamaqua Station Restaurant, a gift shop and creamery. It was added to the National Register of Historic Places in 1985.

The original section of the station was built in 1874. 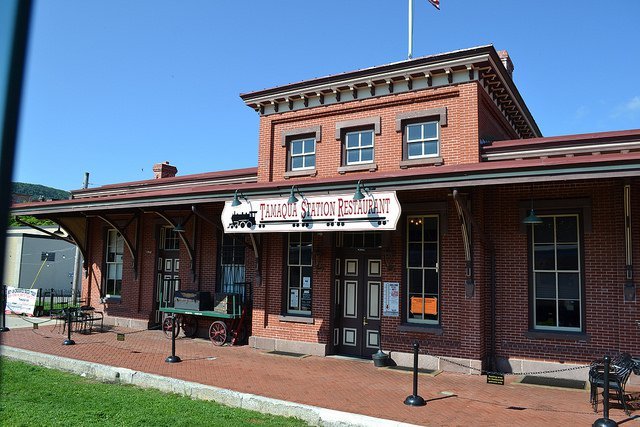 The track-side of the station with the single line that still services it. 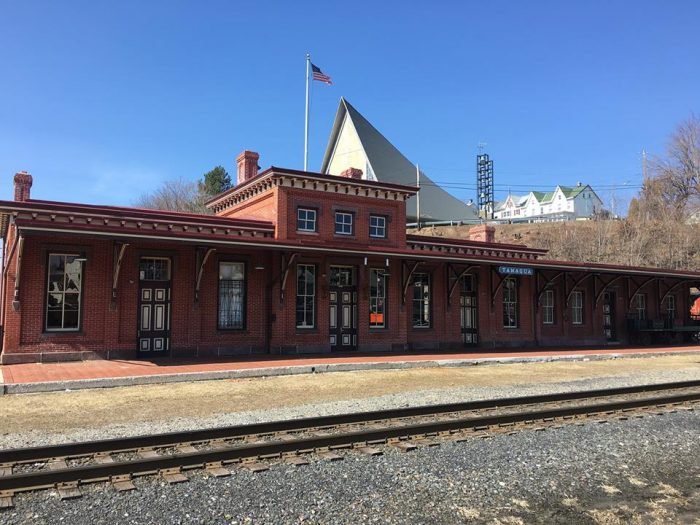 A post card that features the station in its prime. 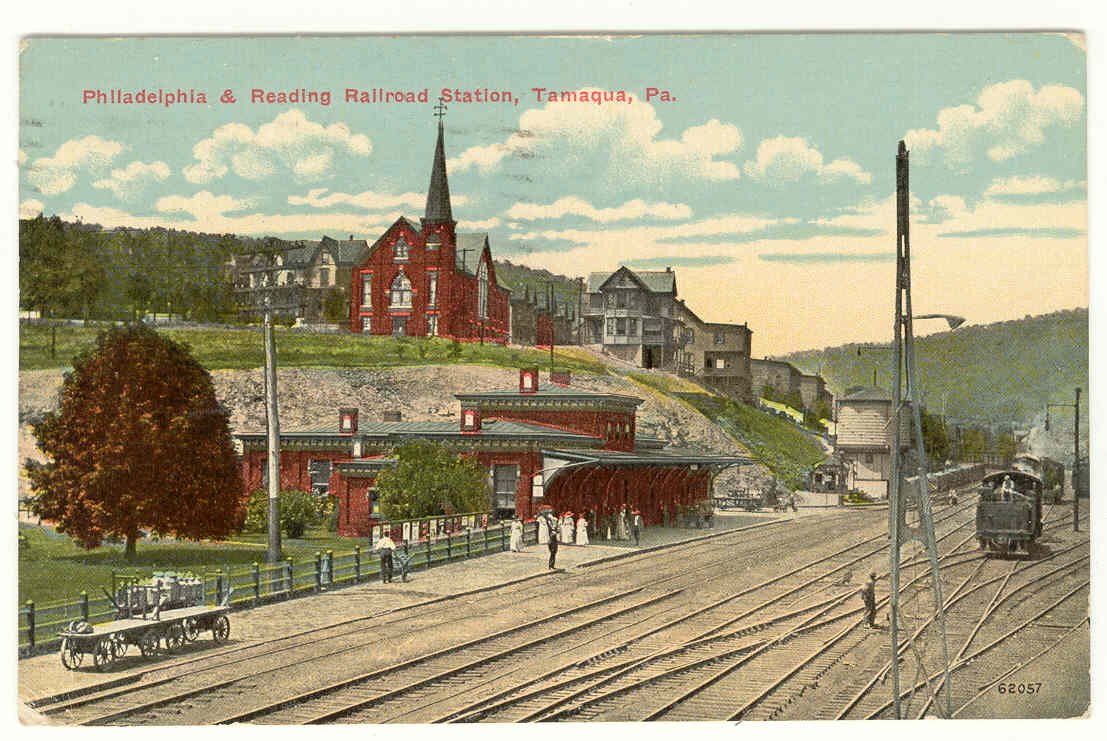 The interior is now dominated by the Tamaqua Station Restaurant. 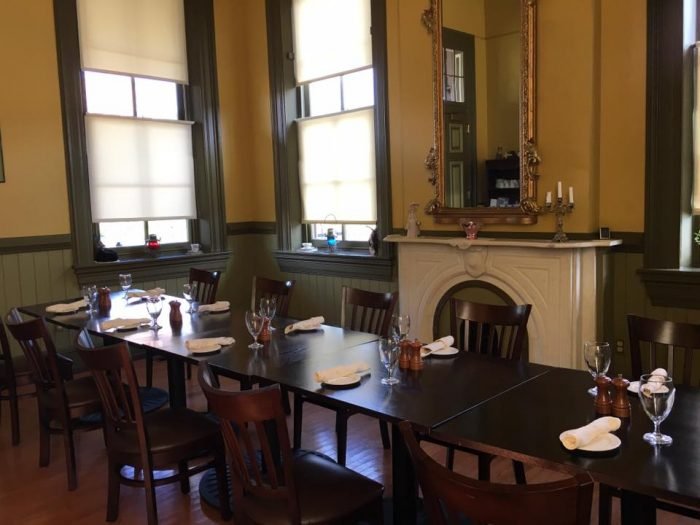 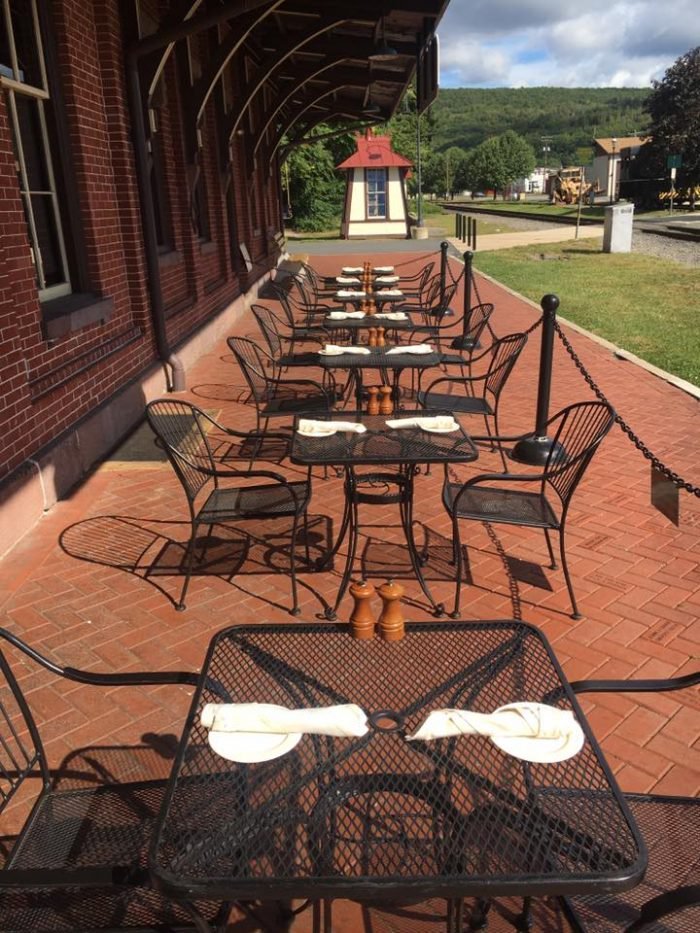 In 1831, the Little Schuylkill Railroad completed a line that ran between Tamaqua and Port Clinton, a distance of 21 miles, that initially used horse-drawn passenger and coal cars.  This was not only the first line in the region, but one of the first in the country.  Steam locomotives were utilized starting in 1833 and the Little Schuylkill built a large engine/round house in Tamaqua in 1857 that had room for 21 locomotives as it expanded its anthracite coal hauling operations.

The Philadelphia and Reading, which was founded in 1839, then built a modest depot where the current station now stands.  However, it was destroyed by fire in 1873 and the company built a new station at the same location the next year.  This new station incorporated a two-story concourse, restaurant, separate men’s and women’s waiting rooms, ticket office and restrooms.  The interior used gas lighting and a series of six fireplaces for heat.  They, along with the chimneys, were removed in the 1920s with the arrival of steam heat.  It also featured hardwood floors, wainscoting and plaster walls.  In 1881, the Depot Square Park was built adjacent to the station and featured gardens, trees and a fountain.  At its peak in the early 20th century, the station handled 40 trains per day as people headed to and from east coast cities.

In 1896, the old roundhouse was demolished for a more modern facility and the station itself was remodeled in 1915.  In the 1930s, the restaurant closed and during World War II, the station served thousands of soldiers and recruits as they headed off to war.  Eventually, trolleys, other forms of public transportation and automobiles ushered in the decline of passenger service on the railroads.  In 1950, Depot Square Park was sold to Bell Telephone and the station ended passenger service in 1961.  The building was used for administrative purposes until 1980 when it was sold to the Borough of Tamaqua and then abandoned.

The station was the focus of numerous demolition threats, especially after it was damaged by fire in 1981 and passed through the hands of various real estate developers.  The Tamaqua Historical Society stabilized the building after the fire and in 1991 the Tamaqua S.O.S was founded to save the station.  It purchased the station for $25,000 in 1992 and then spent the next 13 years raising funds and coordinating restoration efforts.  The station was re-dedicated and opened to the public in 2004 after the $1.5 million renovations were completed.  Currently, the station is home to a heritage center that features local art, history and cultural exhibits, a restaurant, gift shop and creamery.