Constructed in 1913 by architect G. Albert Lansburgh, the Orpheum Theatre was the second theatre built in Salt Lake City for the Orpheum chain. Beginning as a vaudeville venue, the rising popularity of film and the 1927 purchase of the building by Louis Marcus Chain resulted in a series of renovations that transformed the theatre into the Capitol. The first “talkies,” or movies with sound, were shown on the big screen in 1929. Despite a tragic fire on July 4, 1949, the building has continued to serve patrons of the Salt Lake City area up to date. It now doubles as a performing arts center and was added to the National Register of Historic Places in 1976.

The Captial Theatre was again remodeled and renovated in 1976 to restore it as closely as possible to its original form. It now functions as a center for the arts and offers viewings of musicals, concerts, and ballet. 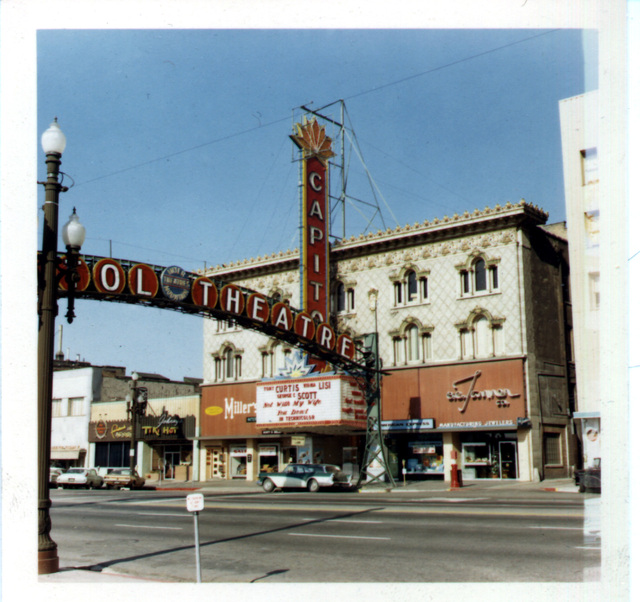 The building was listed on the National Register of Historic Places in 1976. The Capitol Theatre is notable for the style of architecture used to create it. At the time of construction, the use of terracotta was unheard of in Utah. 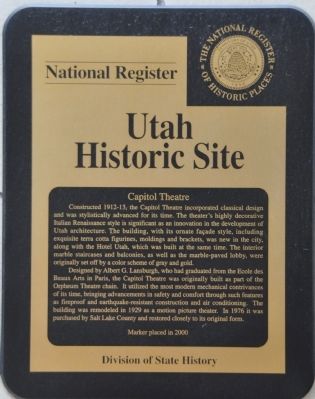 The Orpheum Theatre first opened its doors to the public in 1913 as a vaudeville attraction. Due to the rising popularity of film, the building was later renovated in 1927 to allow for the viewing of films on the big screen. 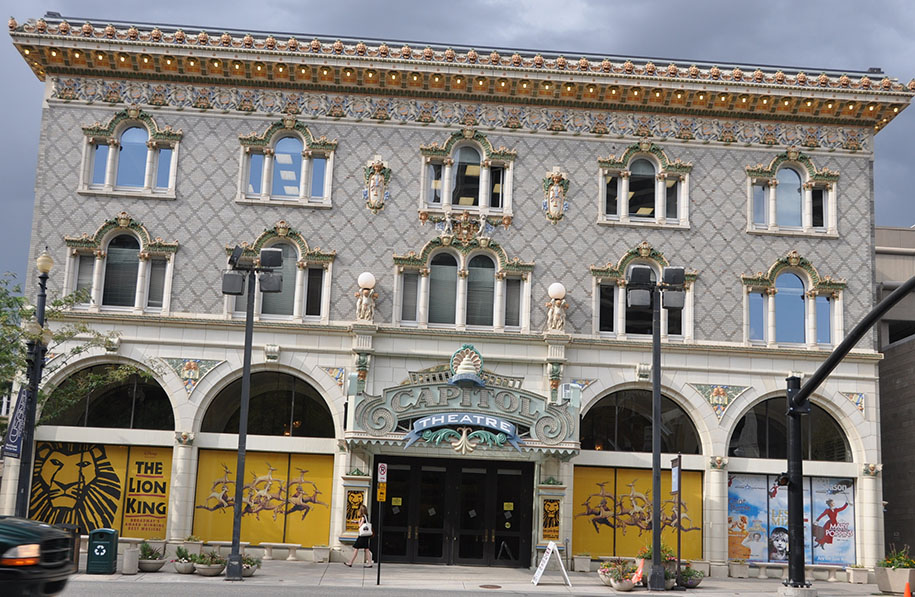 The Orpheum Theatre […] is significant for introducing innovative architectural features in theatre construction to the Intermountain West. Built in 1912-13, the Orpheum Theatre utilized the most modern mechanical contrivances of its time bringing advancements in safety and comfort through carefully manipulating the interior environment of its public spaces. The building of the theatre also marked an important event in the importation of out-of-state architects and foreign design styles to provide alternatives to the more conventional American and Utah vernacular styles which dominated the majority of commercial and public architecture. The introduction of new building materials tapestry brick and terra cotta, and a highly decorative new style--Italian Rennaissance, along with the "water-curtain," "Plenum System" air-conditioning and "totally fireproof" construction made the Orpheum Theatre a significant building in the development of architecture in Utah. Of the several theatres built nationally by San Francisco architect G. Albert Lansburgh, the Salt Lake Orpheum was considered one of the most successful. 1

G. Albert Langsburgh was thirty-six years old when the L.L. Orpheum Realty Company sought him out as architect for their next big project. By this time, he had already graduated from the Ecole des Beaux-Arts in Paris and been awarded both the Le Diplome d’Architect de Government Francais and a gold medal from the Society of French Artists at the Grand Salon of the Champs Elysses. After finishing his studies of the ancient and modern architecture styles in Europe, Lansburgh returned to San Franciso where he began building an impressive portfolio. Under his belt were two previous Orpheum theatres in San Francisco and Los Angeles, the Manx Hotel, Newman and Levism Building, Concordia Club, Sacks Building, E. and M. A. Gunst Buildings, and Lamberman’s Buildings.

For Salt Lake City’s Orpheum Theatre, Lansburgh employed the “Italian Renaissance Style” as inspiration for his design, displaying classical revival detailing. His use of terracotta figurines was virtually unheard of in Utah at the time and ultimately inspired future architects in the area to explore other similar mediums and experiment with other designs and styles of buildings. Costing $250,000 to make, the theatre was able to house anywhere from 1,800 to 2,000 people. No expenses were spared and no luxuries were forgotten, including the creation of a mezzanine floor lounge for female patrons, marble floors and staircases, removable seats in the front of the auditorium, and 26 box seats, among them a central “royal” box. Perhaps most impressive were the lengths Lansburgh and his crew went to in pursuit of comfort and safety for the Orpheum’s patrons.

The Orpheum Theatre was considered architecturally advanced during its time. Constructed of concrete, steel and brick, this fireproof construction was aided by a "Water Curtain" which was a series of sprays in front of an asbestos curtain which automatically activated when the temperature reached a designated height. According to one report, "Water spouts from the sides and descends from above, forming a complete screen of water through which fire or smoke could not penetrate."

A mechanical ventilation system known as the "Plenum system" was also provided. Precursor to present forced air conditioning systems, it worked thusly: "Automatically the air is expelled through gratings beneath the seats at a rate of three feet per second. It rises to be drawn out through the ventilators in the ceiling and dome without any perceptible draught." It was claimed that "on the hottest day 'n summer it is possible to keep the atmosphere at 60 degrees while, when the mercury is below zero in winter, patrons can be warm and snug...and breathe absolutely pure air."

An added safety feature was the exit system with 30 exits from all sides of the building, "the doors of which are fitted with patent contrivances that cause them to fly open on the least pressure from the inside. A special structural system made the building "earthquake-proof." The boiler was placed in a separate building to eliminate the dangers of possible explosions. 1

Despite these preemptive measures to ward off a tragedy, and the future renovations made to the building after its 1927 purchase by Louis Marcus Chain, a terrible fire broke out in the basement of the renamed Capitol Theatre on July 4, 1949. No patrons were harmed, but a seventeen-year-old usher Richard Duffin lost his life. It is believed by many that the ghost of “Dickey Duffins” still haunts the theatre, making his presence known by unplugging extension cords, moving lights, slamming doors, and messing with the elevators. The story of the fire and Duffin’s untimely death was featured on SyFy Channel’s Paranormal Witness in the episode “Capitol Theatre Haunting.”

Today the building serves as a performing arts center where Salt Lake City citizens can go to watch live performances and the ballet.