This Georgian Revival university library was designed by Charles A. Platt and built in 1924. It was the third library constructed for the University of Illinois, intended to replace the smaller Altgeld Hall. Made of brick, it features three limestone arches that form the front entrance, as well as four chimneys and eleven dormers in a green slate roof. The library itself boasts 27 stained glass windows and four murals. The Library stands slightly away from the historic center of the university campus--a deliberate choice which allowed for the building to expand alongside the university's holdings over the years. The building now houses extensive collections as well as the University Archives and the Rare Book and Manuscript Library. 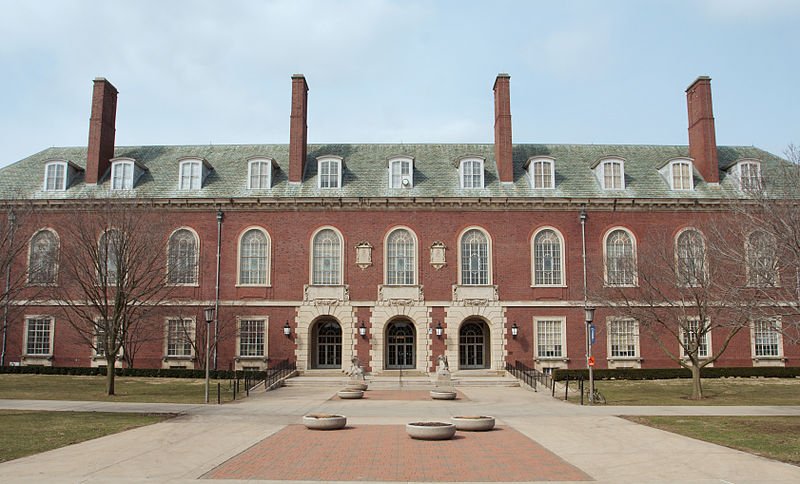 In 1867, the University Library was first founded--in fact, it preexisted the University itself. Initial Library acquisitions, approved by the Trustees of what was then called the Illinois Industrial University, built up a core collection of books. Both Library and University opened their doors in 1868. At that time, the Library had 1039 volumes.

In 1912, University President Edmund James delivered a speech before the Board of Trustees, declaring his ambitions to expand the Library's holdings until they rivaled those of the impressive academic libraries in Germany. James said that the Library should acquire "at least a million of books as rapidly as possible," and that the state should fund construction of a new building to house all of these books (quoted in "Library History").

The current Georgian Revival building was built in the 1920s. The Library collections moved to their new home in 1926, and UIUC President David Kinley dedicated the building in 1929. In 1935, the Library purchased its one-millionth volume, fulfilling President James' earlier ambitions. As the Library continued to expand, its collections in History, Classics, Architecture, and Mathematics became especially impressive. The UIUC Library is also notable for its early adoption of new technology facilitating better organization, thanks to the direction of University Librarian Hugh Atkinson. By 1978, it was using an online catalog. Today, the Library houses over 14 million volumes and continues to grow.