Main St. Bridge and the Ellsworth Flood of 1923

From this end of Ellsworth's Main Street Bridge, much of the damage from the city's "third destruction" could have been witnessed in 1923, when massive snowmelt and spring rains destroyed two dams and damaged a third. Floodwaters overflowed the banks of the Union River and cascaded into downtown Ellsworth, rising past Post Office Square (adjacent to this site). The Infant Street Bridge was destroyed first (and never rebuilt), followed a few days later by the Main Street Bridge. Approximately four days of heavy flooding destroyed much of downtown, though miraculously no one was killed. No flood of such scale has occurred in Ellsworth since, though downtown was ravaged again ten years later by a catastrophic fire in 1933.

Lumber washed into town during the flood. Much of the damage was caused by the movement of industrial debris down from the many lumber mills operating along the Union River. (Courtesy of Maine Historical Society). 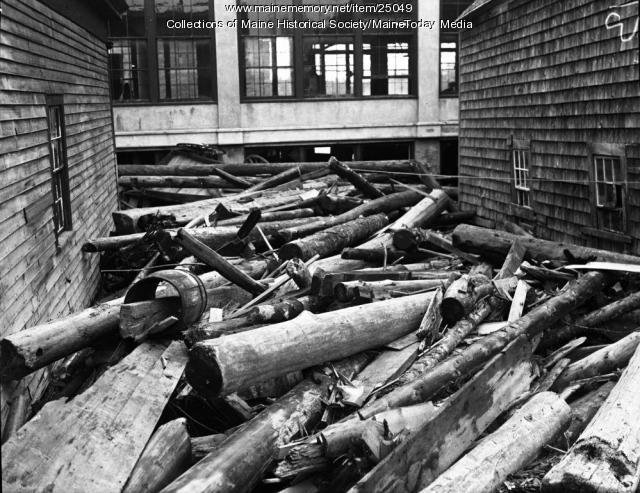 The Ellsworth Foundry, many buildings of which were destroyed or carried off by the flood. Two thirds of the boats moored there were also carried out to sea and had to be recovered later. (Courtesy of Maine Historical Society). 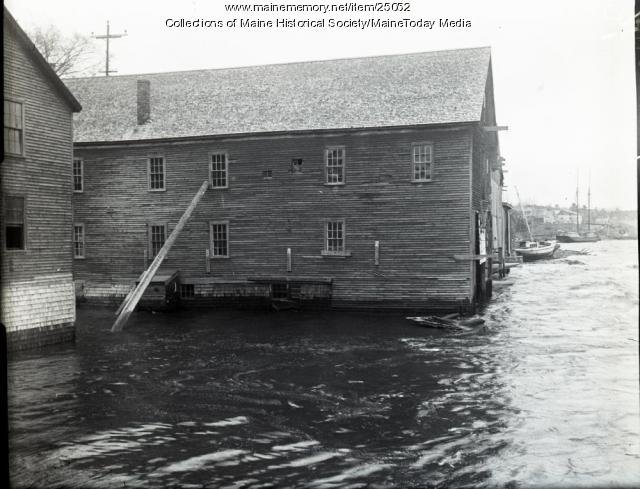 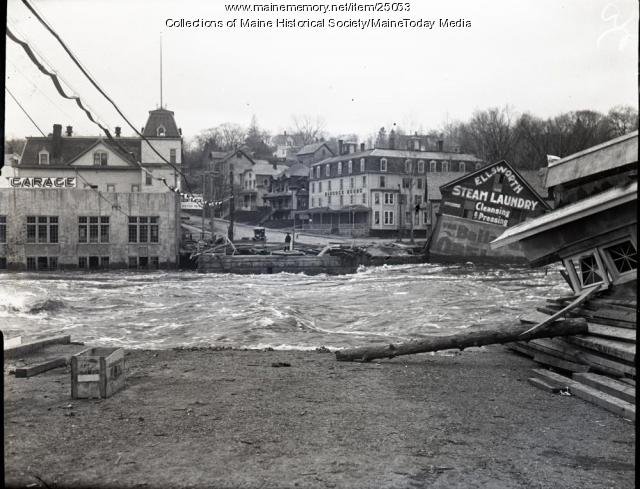 The Ellsworth Power House and Dam in 1920. Though the dam held as water spilled over and around it, the power house needed substantial repairs from the overflow and debris that crashed through the roof. (Ellsworth Public Library). 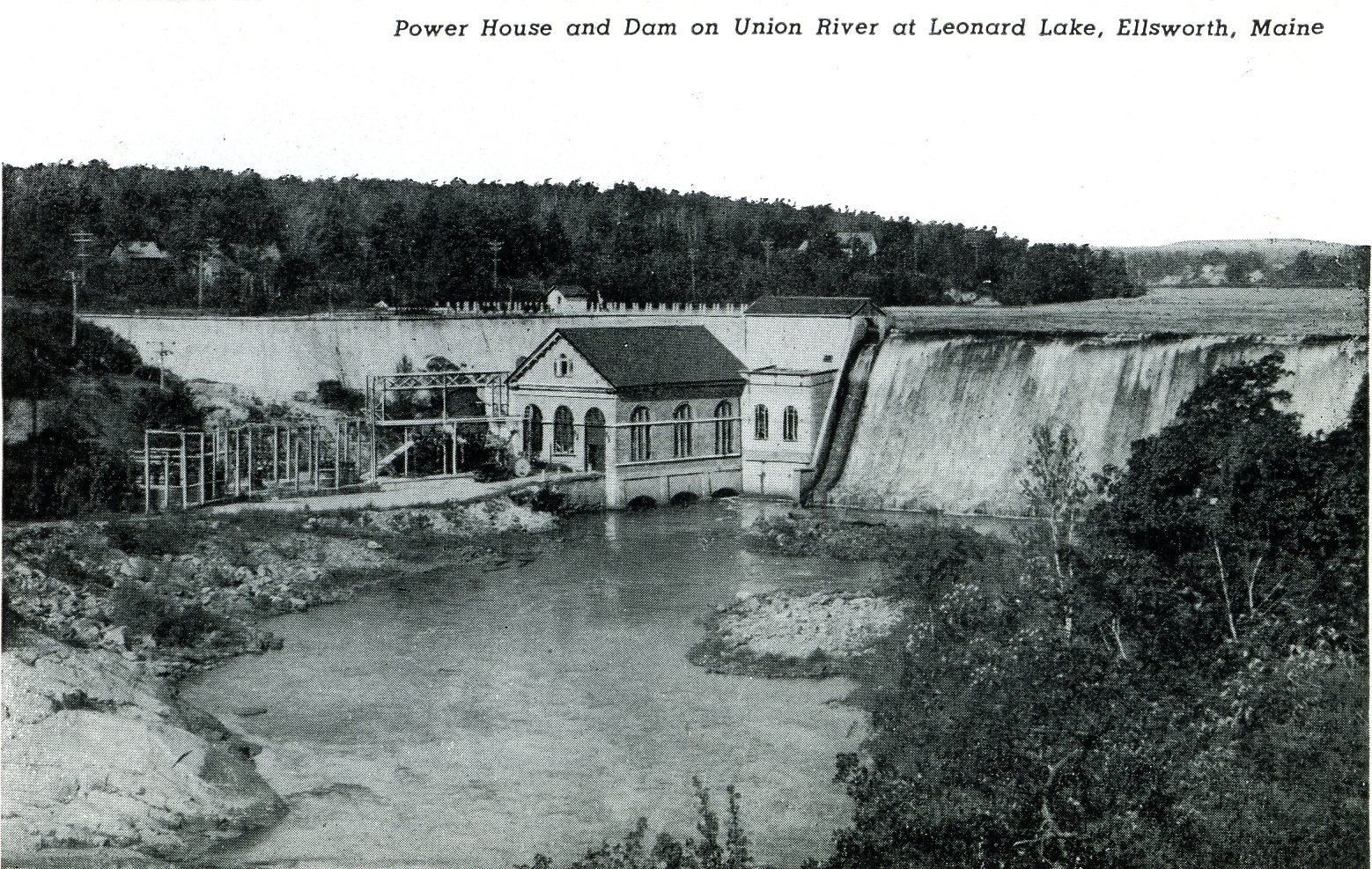 A New York Times article about the flooding from May 2, 1887. Note that the Main Street Bridge is still in operation as of this writing--it would be swept away by floodwaters less than a day later. (NY Times). 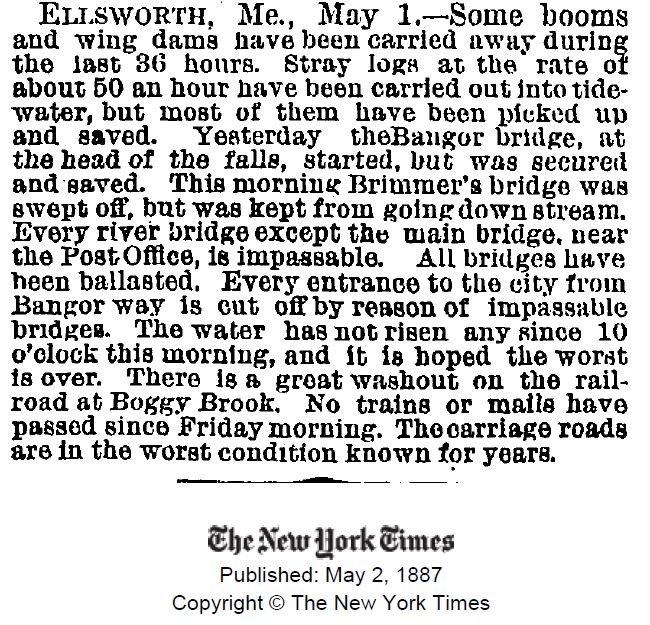 The remains of Ellsworth's railroad bridge can be seen in the background of this May 3, 1923 photograph. (Maine Historical Society). 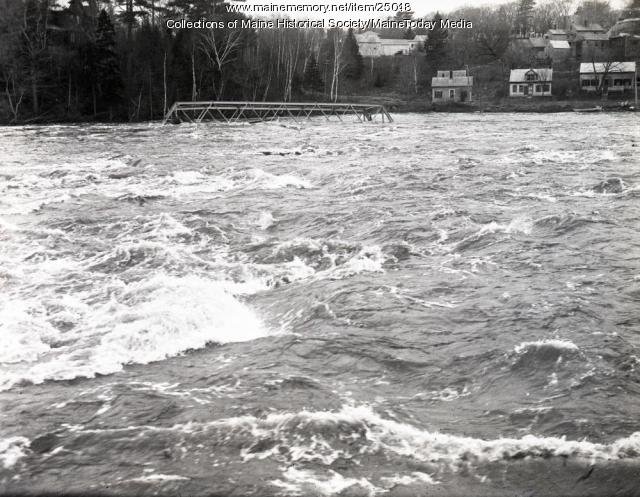 Main St. Bridge a few years before being swept away by floodwaters. Note how close to the riverbank these various structures were before the disaster. (Maine Historical Society). 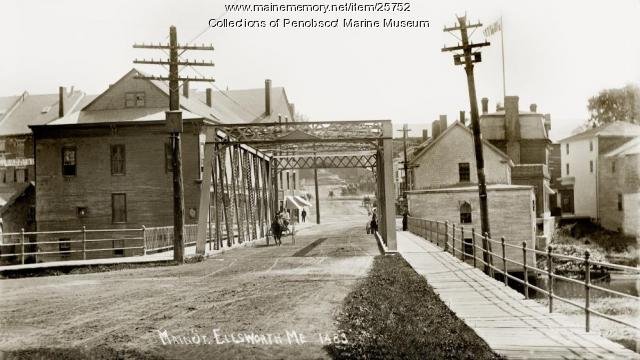 Hancock County’s seat of Ellsworth has long been one of Maine’s most prosperous towns. Its meteoric rise in the early 1800s was due in no small part to Colonel John Black (whose immaculately preserved estate of Woodlawn is within the town), who invested heavily in the timber and shipbuilding industries--a self-sustaining cycle wherein the movement of lumber required more ships, and more shipbuilding required still more lumber. Through much of the 1800s and early 1900s, this booming industry sent men out into forest lumber camps in the winter, where trees would be cut down and stacked on the ice of the Union River, to be floated down to lumber mills during the spring thaw.

This industrial activity would inadvertently lead to much of the destruction caused in 1923. Floods were not unknown to the area, and indeed a large flood in 1833 had carried away 30-40,000 logs from local mills while wreaking havoc on a number of local structures and bridges. Ninety years later, still more infrastructure had been installed to feed regional industry: the lower falls of the Union River were collared by the Ellsworth Dam (also known as the Union River Dam) in 1907 to produce electrical power for the area. Several other dams and mills were in operation (mostly for private lumber concerns) and a brand new dam had been built at Brimmer Bridge the previous year to “develop a tremendous water power…[and] eliminate a vast territory of swamp land useless for almost any other purpose,” creating a massive body of water now known as Graham Lake.

The timing could not have been worse. The winter of 1922-23 beheld particularly heavy snowfall, which translated into record water levels when spring rains liquified the snowpack in April 1923. On Monday, April 30, a private dam several miles up the Union River gave way. Water levels in Ellsworth soon rose to the height of the Main Street Bridge. A smaller bridge at Infant Street buckled and was carried away. A massive jam of logs, pulp, and staves from the upriver mills began to block the river at Main Street Bridge, and laborers worked feverishly to clear them. Twice they succeeded over the next two days.

On Wednesday, May 2, however, more bad news came. The new Brimmer Bridge Dam at Graham Lake was breaking up under the pressure. Properties near Ellsworth’s riverbanks were evacuated. At 10pm, the Farmers Union building was carried downriver and jammed under the Main Street Bridge as water levels rose to the middle of Post Office Square. Though the building broke up, the bridge was shortly lifted from its foundations and swept away. Soon more buildings were carried off, including the movie theater and a number of waterfront foundries and factories. The Ellsworth Dam itself held, though the Power House was damaged by excess water flowing over and around the dam, and a number of logs and lumber debris that punched through its roof as the water spilled over.

Though the worst of the flooding was over after four days, it took months to recover. Local roads and railroads were washed out, as well as the two bridges that linked the eastern and western halves of Ellsworth; it took two weeks to restore electrical service; and many local stores and factories suffered from flooded basements and damaged stock. By some miracle, no citizens of Ellsworth lost their lives, and all the town’s boats were somehow recovered (though many were badly damaged). Months were spent gathering and savaging the many tons of lumber, pulp, and flotsam that had spilled out into the bay and washed up on nearby shores.

A temporary bridge was built by the end of May to facilitate traffic, and a passageway inside the Ellsworth Dam was opened temporarily for pedestrian traffic. Today, the Main Street Bridge stands on the site of its predecessor, and nearby Post Office Square, at the bridge’s western end, offers a useful reference for the reach of 1923’s calamitous waters.