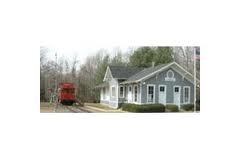 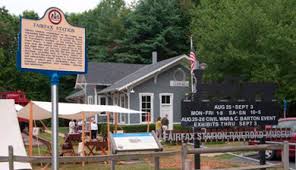 Fairfax Station: All aboard! by Nan Netherton-- See link below for more information. 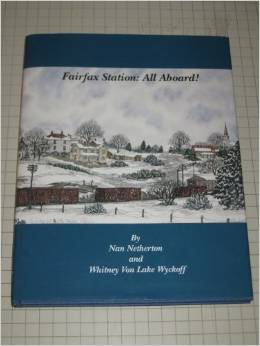 Completed in 1854, mainly by slaves and Irish immigrants, the station served as the home to the Orange & Alexandria Railroad. Fairfax Station emerged at a time when Fairfax enjoyed a growing economy. Still, things quickly changed in the 1860s as the station became a pivotal railway during the Civil War, both strategically and as an ipso facto triage unit. The eventual founder of the American Red Cross took care of both Union and Confederate troops wounded after the Battle of Bull Run.

Not far from the station is St. Mary's, which opened in 1860 as the first Catholic church in Fairfax and now a monument to the Irish Immigrants who helped build attend to the railway. The Irish, most of whom were still suffering from the issues related to the Great Famine, answered ads placed by the O&A Railroad Co. during the 1850s. The Irish workers primarily served to supplement the abundance of slaves who also worked on the railway.

The vast majority of Fairfax residents voted for cession from the United States. However the arrival of the Civil War put not only put a sizable dent in the local economy but also made life in Fairfax quite tricky -- and scary -- during the war, given its proximity to the two capitals: Richmond and Washington D.C. Fairfax County ostensibly grew into a no man's land with the Union on one side and the Confederacy on the other. From time to time, though, troops would move through and occasionally meet for battle.

In August 1862, after the Second Battle of Bull Run (Manassas) during the Civil War, Clara Barton, along with doctors and nurses, attended to wounded Union and Confederate troops at the station. She went on to found the American Red Cross in 1881.

Fairfax Station is widely known for the large caboose that sits just outside the depot's doors. Exhibits at the Fairfax Station Railroad Museum include artifacts related to the Civil War, Red Cross, and railroading in Virginia. The displays housed at the museum highlight the unique role that the station played in the intersection of all three areas and effectively illustrates the complex history of Fairfax Station and the surrounding area.