The former Pottsville Armory building, constructed in 1913, is now home to the Schuylkill YMCA and has been since 2009. The large red brick building with a typical “T” plan was built with combinations of the Romanesque and Gothic Revival architectural styles for the storage and training needs of Company H of the 8th Infantry Division of the Pennsylvania National Guard. While in use, the horizontal section of the “T” housed the unit’s administrative offices while the vertical section housed the drill hall. The YMCA has made numerous alterations to the building’s interior in order to meet the exercise needs of its members. However, its exterior remains largely intact. The former armory was added to the National Register of Historic Places in 1991.

A banner for a 5K road race hangs in front of the former Pottsville Armory, now the Schuylkill YMCA. 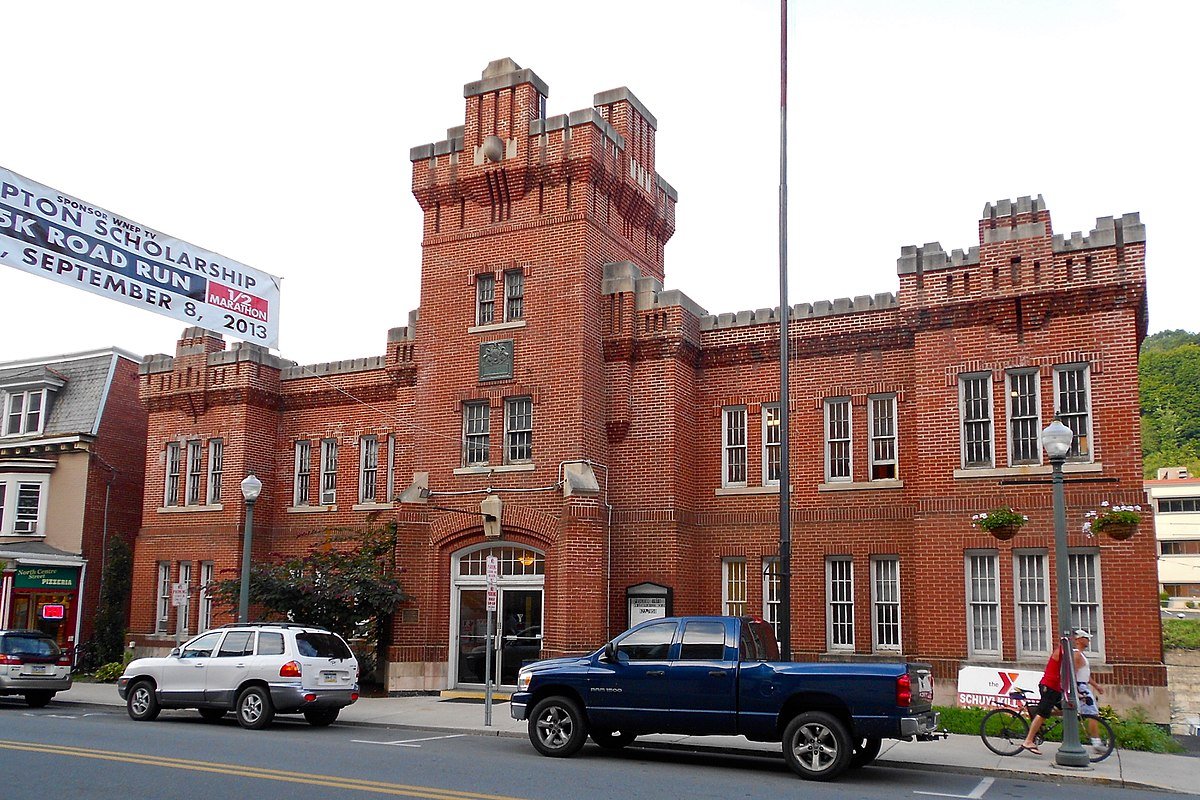 At this angle, the old drill hall and vehicle garage can be seen at the rear of the old armory. 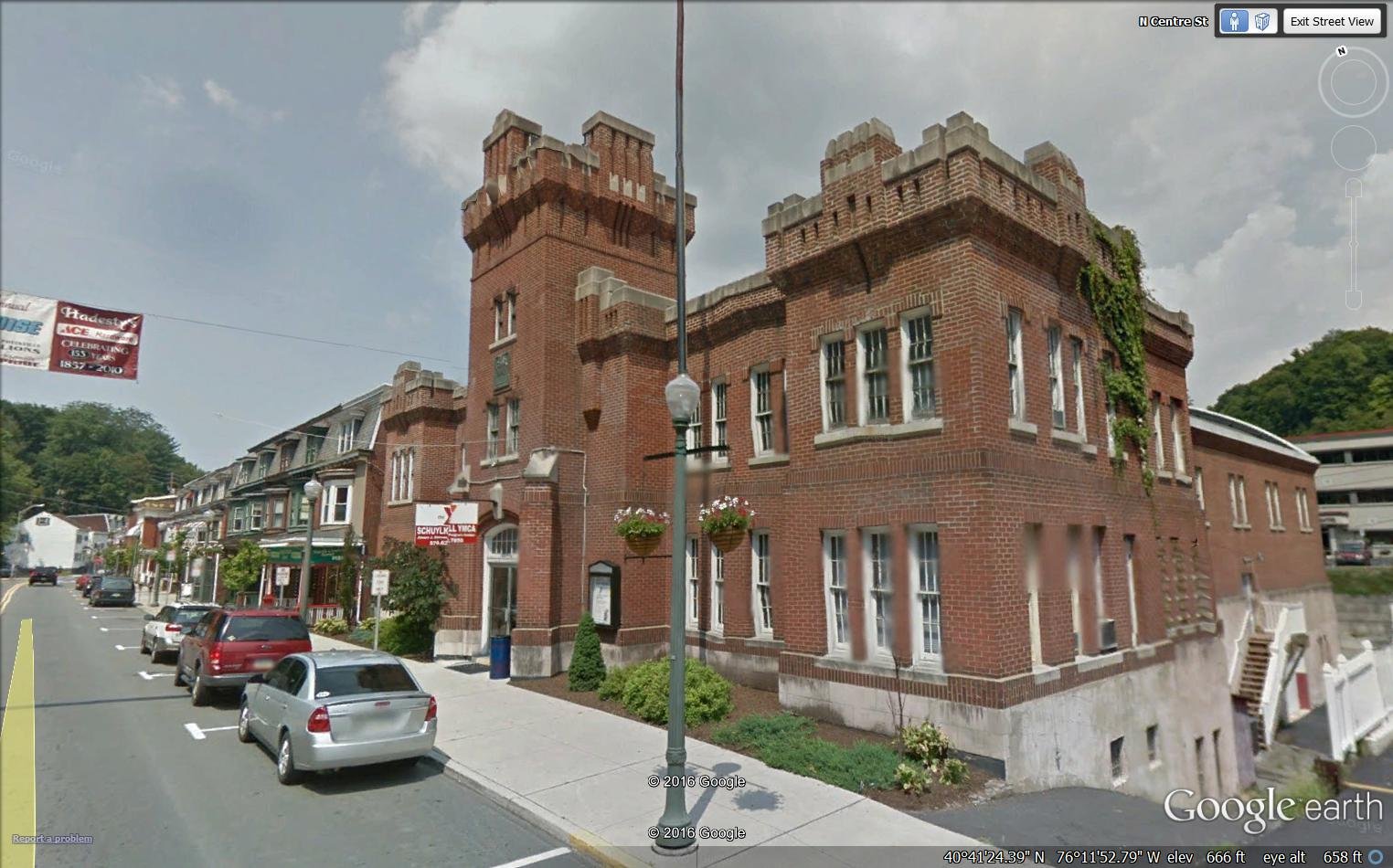 A postcard from the 1950s features the Pottsville Armory. 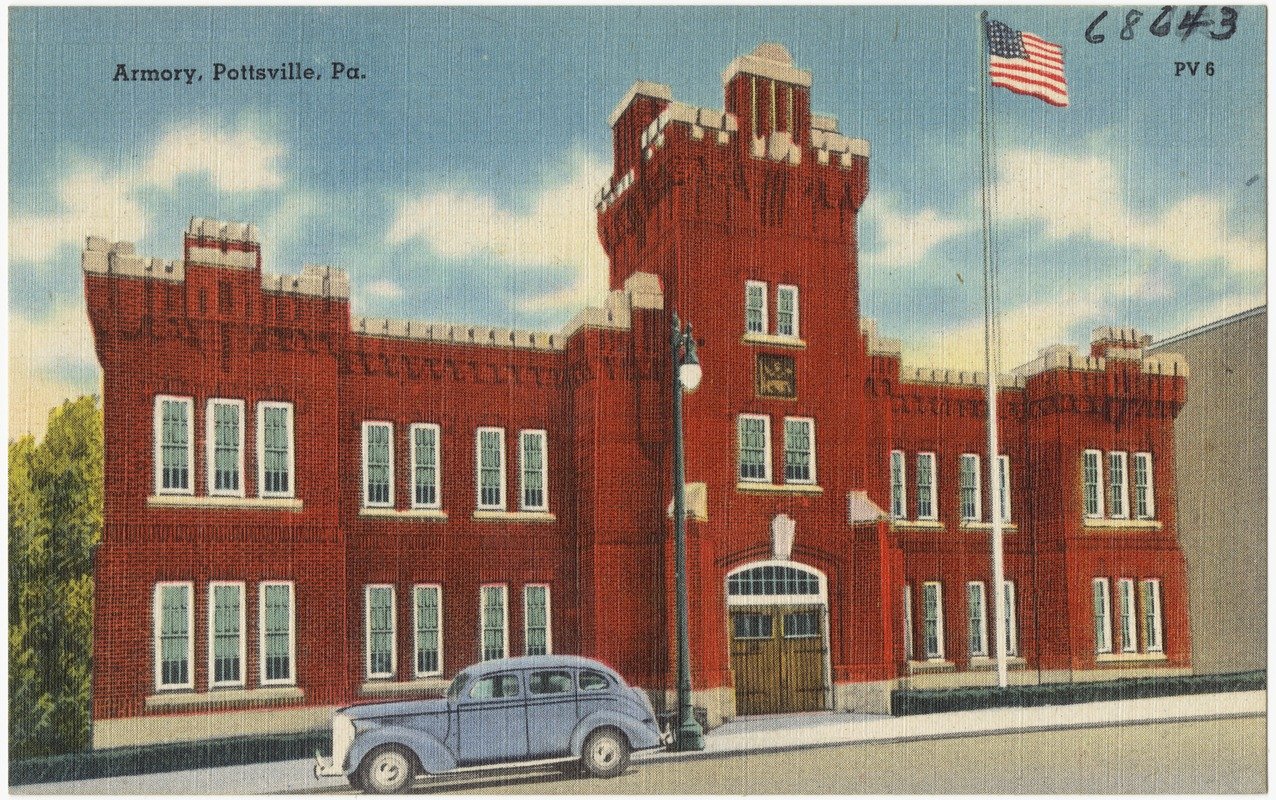 The interior of the old armory has been totally renovated as evidenced by this modern exercise room. 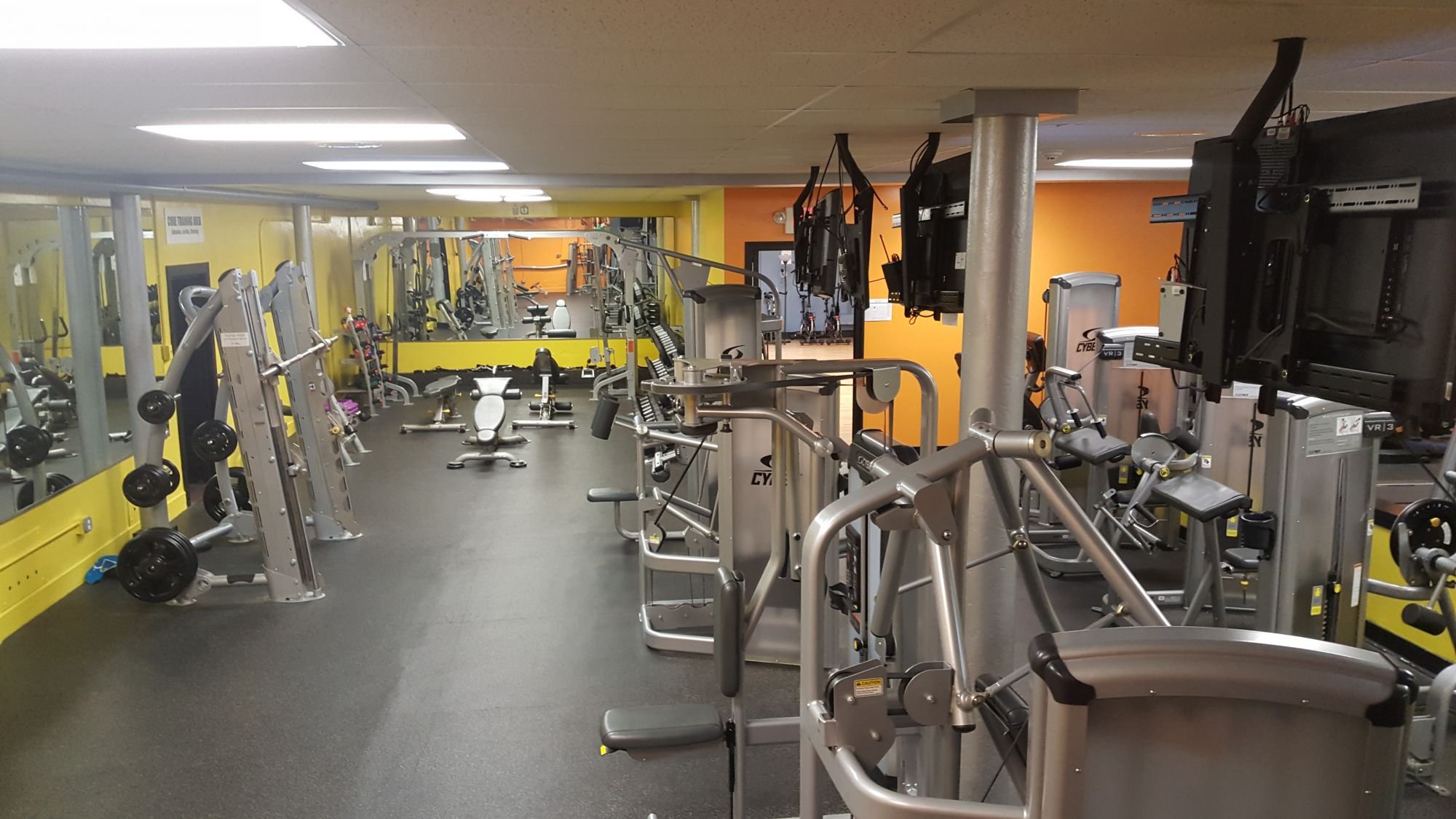 The lobby of the old Pottsville YMCA. 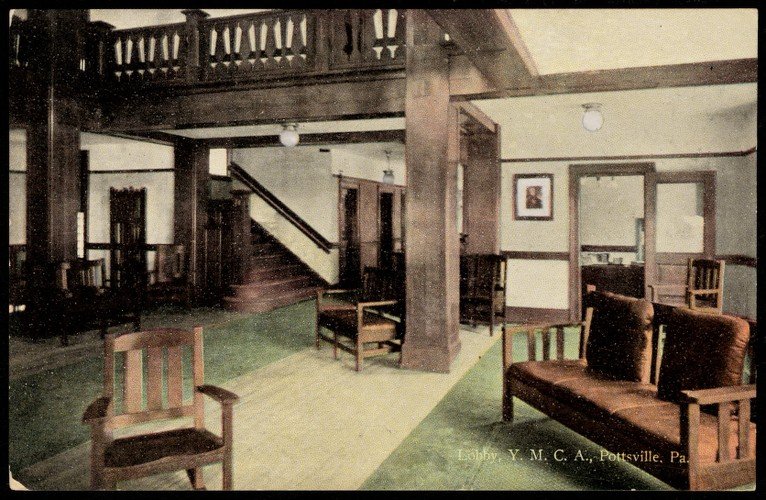 The red brick castle-like Pottsville Armory was designed by the Wilkes-Barre architectural firm of McCormick and French in a traditional “T” formation and completed in 1913.  The two-story administrative building features brick turrets, battlements, stone coping, first floor brick lintels, second floor brick window hoods, stone window sills just under the six-by-six windows and brick soldier courses between the two floors.  In its center is a three-story tower with a brick arch entrance with stepped reveal that is held together by a large gray keystone.  Wooden double doors provided access to the building.  The armory’s kitchen was located in the basement of this section.

Extending back from the administrative section was the building’s drill hall that was used to train members of the Pennsylvania National Guard.  It was constructed with brick corbelling accents just below its arched roof.  Inside, riveted steel Warren truss arches with gusset plates support its ceiling.  The 60-foot by 80-foot hall sat atop a basement that was home to a large vehicle storage area, boiler room, coal room, and various storage rooms.  The hall also contained a balcony that led to locker, CQ (charge of quarters) and classrooms.

The Schuylkill YMCA took over the old armory building in May of 2009 and still operates out of it.  The first YMCA opened in Schuylkill County in Pottsville in the 1930s and maintained a presence until it closed its doors sometime in the 1970s.  It returned at a different location in 1997 and eventually acquired the armory as its new home.  The YMCA made major renovations to the interior of the armory, adding a gymnasium, wellness center and group exercise rooms among other things.  It then consolidated its YWCA at this location after it was unable to afford the maintenance costs at the mansion that housed the YWCA along South Centre Street.  It continued renovations in 2015 when it added a women’s locker room, to include showers and improved the lighting in the gym.  For the most part, the building’s exterior looks similar to how it did throughout its existence with the only major alterations being the addition of emergency exits and the renovation of the main entrance where the original wooden doors have been replaced with modern glass versions.  Now, just over 100 years since its construction, the building still serves the community, just in a much different manner.