The Kansas Aviation Museum is in the Terminal and Administration building of the former Municipal Airport in Wichita. The building and landing area are constructed on ground that had never been plowed and was known as the California section. The Park Board purchased 640 acres (2.59 km2) in 1928. Construction started the building on July 1, 1930, but was soon halted due to the Great Depression and lack of funds. The building sat uncompleted until 1935. It soon became one of the important airport hubs in the country.

The Kansas Aviation Museum is located in the former Municipal Airport Building, which was built in 1935. 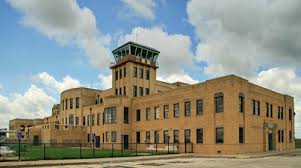 Wichita was the last stop before crossing the Rocky Mountains to Denver or Los Angeles in those days. The airport was greatly needed to transport fuel and, more importantly, weather updates. As told in story after story, many of the people who landed and ate at the restaurant were legends of industry and film. Fred Astaire, Bob Hope, Howard Hughes and countless other famous people all walked the terrazzo floors in what is now the Kansas Aviation Museum. It was tagged the "Country Club without dues." During the oppressive heat of the 30's, people would come out to the airport at night, spread out a blanket, enjoy the cool breezes, and watch the incoming and outgoing aircraft. The building and its grounds set about 75 feet (23 m) higher than downtown and always have a breeze blowing. The runways were paved in the late 30's as a WPA project as was finishing the building in 1935.
During World War II, the airport became the fifth busiest in the United States. It was a convenient stop in the middle of the US and there was endless flight testing of tens of thousands of aircraft being built in Wichita for the war effort. The additions on the east and west end of the building were added in 1942 and 1943. The upper part of the control tower was added in 1940. It was the first control tower to have slanted windows.
After WWII and into the 50's a new division of the military called the US Air Force decided they needed an air base in centrally located Kansas which would later become a Strategic Air Command base. They didn't want to spend years designing and building an airport, they wanted one now. The Air Force and the City of Wichita came to an agreement on price (it wasn't all wine and roses) and the building was sold to the Federal Government in 1951. The city bought land, designed and began construction of the new Wichita Municipal airport on the west side of Wichita. Both civil and military flights shared the airport until October 1954 when the last commercial flight took off. The Air Force continued to use the building (called Building One) until about 1984 when they shut the doors and abandoned it marking it off as surplus. It sat empty and partially gutted for at least six years until the Kansas Aviation Museum was formed in 1990 and began renovation work.
Wichita also was a major destination for nearly every aviation luminary of the times. Charles Lindbergh, Kansas' own Amelia Earhart, and many other celebrities crossed the ramp, admired the beautiful art deco terminal and dined in its cafeteria. The story is even told that Fred Astaire once entertained fellow passengers by dancing in the atrium while awaiting a flight.