The Downing Museum, which officially opened in 2009 as a part of The Baker Arboretum, displays a vast collection of artwork by the late Joe Downing as well as works by other regional, state, national, and international artists. Joe Downing was a world-renowned artist, WKU alumnus and brother of the late WKU President Dero Downing. Baker and Joe Downing were long-time personal friends who collaborated on the design of the Downing Museum. The Downing Museum at Baker Arboretum has the most comprehensive collection of the varied works that Joe Downing created during his lifetime. Looking through these works, one can see his work evolve through changes in shape and color. One can grasp his exploration of traditional media, but one can only wonder at the personal vision that embraced certain found objects and used them to create works of art. 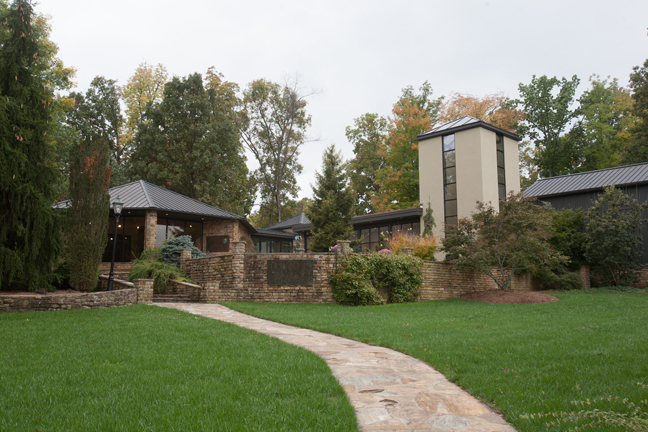 The Downing Museum welcomes visitors to to view works by Joe Downing as a painter and sculptor; the collection includes examples of his abstraction and experimentation with different media formats including leather, linen, canvas, old wood, metal, staples, and found objects. Visitors also have the opportunity to view works by local, state, national, and international artists, both visiting and from the museum's permanent collections.

Exhibits at the Downing Museum represent a lifetime of creative work by Joseph Dudley Downing; a visual journey spanning from his humble beginnings in Horse Cave, Kentucky to his international recognition as an contemporary visual artist. Selections from the museum's collections as well as private collections will give visitors a glimpse into the celebrated career of an internationally renowned artist from Horse Cave, Kentucky. Visitors will learn about the life of Joe Downing as well as the history of the Downing Museum and Baker Arboretum. Other exhibitions highlight select works by local and regional artists.

Founded in 1992 by Jerry Baker, The Baker Arboretum now covers 115 acres. Working with the tree and art collections, landscape architect Mitchell Leichhardt designed a tapestry of trees and art. Built on a ridge of rolling hills in the outskirts of Bowling Green, Kentucky, the Downing Museum's architectural structure allows for lovely views of the Arboretum while inside—complementing the exquisite art of Joe Downing.

Jerry E. Baker, renowned south central Kentucky philanthropist, passed away at his home at the Baker Arboretum on Thursday, June 22, 2017. Mr. Baker was a longtime supporter of the arts and humanities in Kentucky, gifting his $17 million estate to WKU for the purpose of education and public enjoyment. Together with Mitchell Leichhardt (1924-2015) and Joe Downing (1925-2007), he founded and constructed the Baker Arboretum and Downing Museum. His history of support for local organizations is unrivaled and will continue to be felt across the region through his philanthropic endeavors.

In addition to the Downing collection, the museum also holds pieces that represent Jerry Baker's lifetime of art collecting, with examples from the South Central, Kentucky area, and from national and international artists, as well. Mr. Baker's collections represent decades of his support for the arts in Kentucky as well as his travels both in the United States and abroad.

PAGE│DUKE Landscape Architects was asked, in 2004, to become part of a team to develop a long-term master plan for the Baker Arboretum and ultimately for a building addition to the existing structure integral to the arboretum.

Phase I of the project involved the complete renovation of the private home on the property with the removal of an existing swimming pool, allowing for a new relationship to the existing landscape. New pathways and intimate garden spaces became part and parcel of this phase.

Phase II of the master plan was the development of a dynamic addition to the existing octagonal structure which housed The Doors of Life, painted in France by Joe Downing. Intellectual focus for this portion of the project focused around ensuring the new building had a strong regional voice tied to the imagery of a Kentucky farm. The parallel barn-like wings and silo feature were inspired by Joe Downing's fond memories of his Horse Cave art showing where the paintings were hung in a tobacco warehouse with white sheets, softly billowing, serving as backdrops. The final product of this team effort is a new museum and landscape that is very evocative of its Kentucky roots and seems very much at home in Bowling Green, Kentucky.