The Yamasee War at Goose Creek

What began as a meeting in hopes of preventing an uprising against the South Carolina government in the Yamasee town of Pocotaligo, ended in a massacre and initiated what is known as the Yamasee War. Beginning on Good Friday, April 15, 1715, the war consisted of many Indian tribes rising up against the British colonies. The war is said to have ended in 1718, however some of the tribes involved refused to sign peace treaties and the Yamasee continued to periodically raid South Carolina colonies well into the 1720s. The war essentially ended the Native slave trade and in the end, helped South Carolina to overthrow the Lord Proprietors. 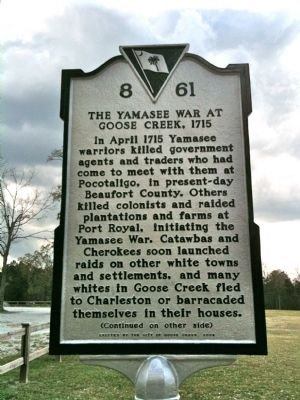 Reverse side of Marker 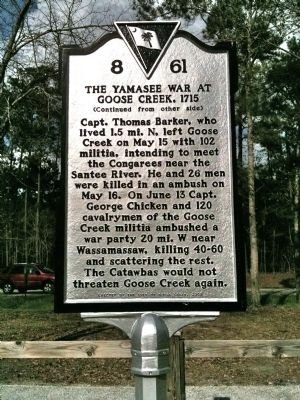 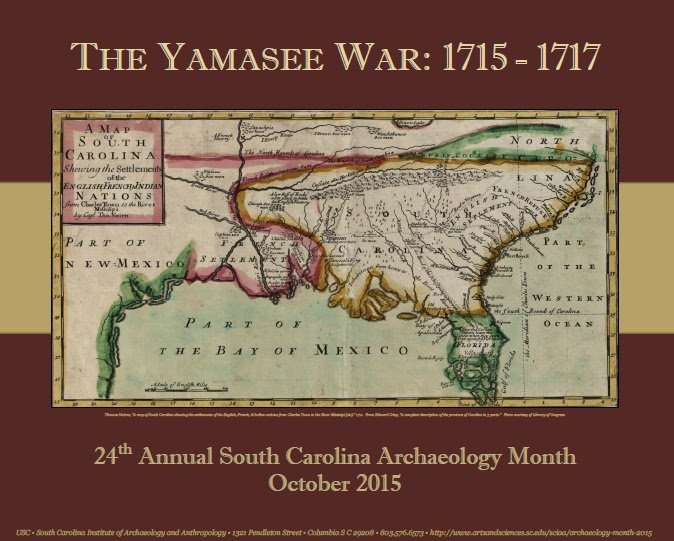 Upon hearing of a possible uprising, the government of Colonial South Carolina sent a party to the main Upper Yamasee town of Pocotaligo in hopes of settling issues and preventing an inevitable war. There had been some hostility building up over the Indian slave trade and the treatment of the Yamasee from their trading partners of the British colonies. Thomas Nairne and John Wright, whom were among the most important people of South Carolina’s Indian trading system, along with Seymour Burroughs and an unknown South Carolinian were among those sent to the meeting. While the English traders enjoyed a night of drinking rum, feasting, and making promises on how they would fix the Yamasee complaints, the following morning would prove disastrous.

Through the night while the colonists slept, the Yamasee debated on how to handle the situation. It has been reported that one of the traders, John Wright had basically threatened the Yamasee with enslavement and murder, thus making them less eager to trade with the colonists. The decision was made and the following morning the Yamasee attacked. Two of the six men were able to escape. Seymour Burroughs, although shot twice in the head, was able to make his way to Port Royal and raise the alarm on the attacks. The unknown South Carolinian made it to a swamp where he was able to hide, in which time he witnessed the torturous death of Thomas Nairne.

This fateful Good Friday morning, April 15, 1715, began what is known as the Yamasee War, which consisted of many different Native tribes rising up against the British colonists. Many colonies were raided and destroyed and many lives were lost during this time. Captain Thomas Barker along with 26 of his men from a militia of 102 were killed in an ambush while attempting to reach the Congarees near the Santee River in May. On June 13,Captain George Chicken along with 120 men from the Goose Creek militia were able to ambush a war party, killing 40-60 Natives and scattering the rest. An army had also been formed of militia and volunteers, as well as enslaved African Americans and friendly Indian nations, which led ruthless attacks against the Indians closest to Charles Town, where many of the colonists had fled. The army continued to attack the Yamasee for the next two years, eventually driving the majority of the survivors further south. By the end of the war in 1718, 7% of the colonist population had been killed, and many had relocated leaving the area almost vacant.

Even though it seemed as if the colonies would completely perish, the colonists, with help from their allies, were able to eventually gain control of the east coast. However, this would not be the end of hard times for the colonists. They were harassed in 1718 from pirates taking advantage of their weakened system and would still endure raids and attacks from the remaining hostile tribes well into the 1720s. Through all of this, they received little help from the Lord Proprietors in England, so it was to no surprise that they would eventually rebel, detaching themselves from their former government.

Many of the colonists realized that war with the Natives meant deadly battles that would be drawn out for lengthy amounts of time, and if war was to break out again, that the Indian slaves would likely turn on their owners-a chance they did not want to take. Although the Indians that were already enslaved were not set free, the British began trading African American slaves instead, essentially ending the Indian slave trade.

The Yamasee War at Goose Creek marker was erected in 2008 by the city of Goose Creek, South Carolina and can be viewed on a walking trail at Foster Creek Park, west of Foster Creek Road.