Built as a Presbyterian church in 1883, The Old Church is the oldest standing church in Portland. Today, the building largely exists as a concert hall, but the building's history is preserved. 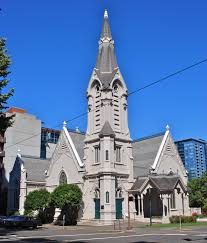 Portland's oldest standing church, Calvary Presbyterian Church was built in Portland in 1882-1883. The gothic-style structure exists as one of the most elaborate wooden-built churches that arose in droves during the 1870s and 1880s and demonstrates the rise of Presbyterianism in Portland during that era.

William Sargent Ladd, who twice served as Portland's mayor in the 1850s and helped the town develop its first banks, donated the land for the church. In 1882, fifty Presbyterians organized a new Portland congregation, which occupied the building until the World War II era.

Baptists moved into the building after the War, which began an extended period of ownership transfers, refurbishing, renovation, and eventually becoming a modern-day tourist and community location. Today, The Old Church and its tremendous acoustics allow the building to serves mostly as a concert hall; it lies within Portland’s West End cultural district.

The "Consider the Lilies" stained glass window dominates one's view while inside the church, as well as the Hook and Hastings pipe organ that made its way to Portland from Cape Horn via San Francisco. As well, the interior contains vaulted ceilings with Gothic curves and cast iron and plaster columnns. Meanwhile, the church's exterior includes a porte-cochere that provided shelter from the rain and provides parishioners with space to pull their horse-drawn carriages.

Office Hours: 11a.m. to 3p.m. Tuesday through Friday, other times by appointment.