This historical marker adjacent to the county courthouse commemorates the early history of the town of Buckhannon. The Pringle brothers are considered to be the first Europeans to reach the area around the mid-1760s, while settlement began in earnest in 1769. Buckhannon was formally established by an act of the Virginia legislature in 1816 and in 1851, the growing community became the county seat of the newly-organized Upshur County. There is some debate as to the origins of the name Buckhannon. While popular legend holds that it was named after Delaware chief Buckongahelas, experts believe it to be actually named after a Colonel John Buchanan.

The historical marker stands beside the Upshur County Courthouse. 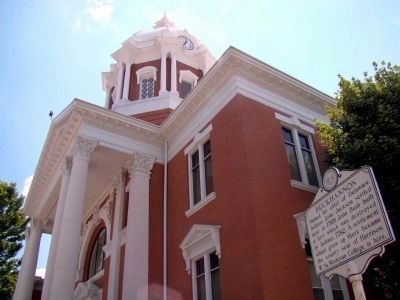 Large mural located in downtown Buckhannon. Depicted is the seal of Buckhannon. The two figures are Samuel Pringle and Chief Buckongehanon in a fictitious meeting. 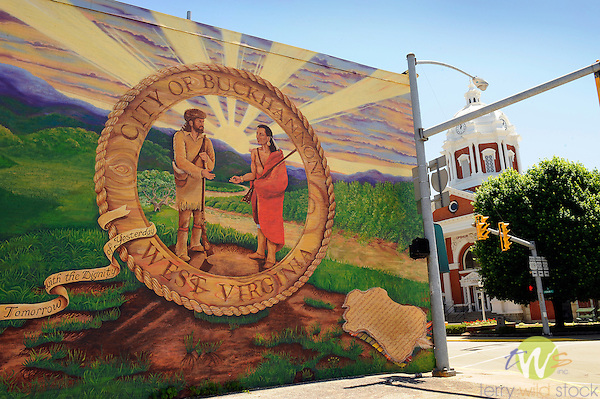 A map of West Virginia with Upshur county highlighted to show geographical relation within state. 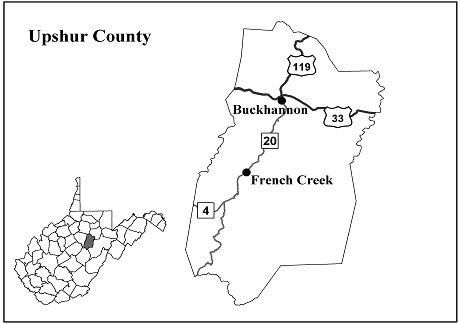 The Buckhannon/Frontier Days marker notably features a different inscription on each side. Image obtained from the Historical Markers Database. 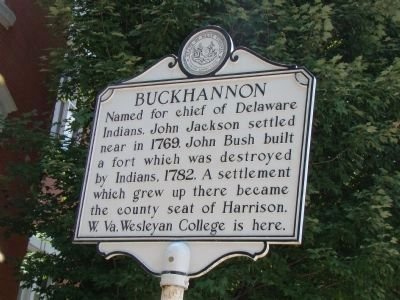 Second side of the marker. Image obtained from the Historical Marker Database. 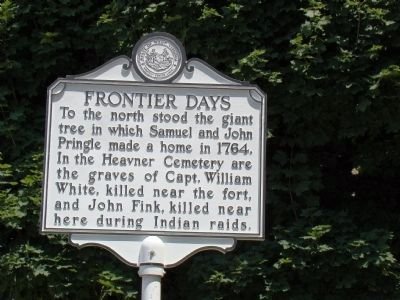 The earliest known Europeans to reach and settle in present-day Buckhannon are brothers John and Samuel Pringle. Stationed at Fort Pitt during the French and Indian War, the Pringle brothers ended up abandoning their post and seeking refuge farther south around the early 1760s. According to legend, the two spent three years living inside a large sycamore tree along the Buckhannon River. They later returned to their home, but in 1769 Samuel Pringle began leading groups of settlers back to the area. These included the Jackson, Sleeth, Cutright, and Radcliff families. In the early years of the settlement, the area was vulnerable to Native American attacks; a local fort built by John Bush was destroyed by natives in 1782.

The Jackson family came into possession of much of the land comprising Buckhannon. This land was then purchased from Elizabeth Cummins Jackson by Robert Patton Jr. for $3,000 in 1809. The town of Buckhannon was officially established by an act of the Virginia General Assembly on January 15, 1816. John McWhorter, John Reger, Philip Reger, John Jackson Jr., Benjamin Reeder, Jacob Lorentz, and Joseph Davis were appointed trustees of the town. Robert Patton Jr. later sold the land to Joseph Ward, who in turn gave it to Daniel Farnsworth in 1821. Farnsworth, a resident of Staten Island, New York, moved to Buckhannon in 1822 and built the first house there since the town’s official establishment. In 1851 Upshur County was created from portions of surrounding counties, and Buckhannon was designated the county seat.

Buckhannon was named after the nearby Buckhannon River, but controversy surrounds the origins of this name. The popularly-accepted theory is that the name comes from Buckongahelas, a Native American Delaware chief who fought for the British during the American Revolution. The death of his son Mahonegon by Capt. William White in 1773 was said to have sparked Native American hostility against white settlers in the Buckhannon area. Buckongahelas is credited as the town’s namesake on the historical marker and through a statue of himself in Jawbone Park. However, many researchers believe that the town and river were actually named after Colonel John Buchanan, an Augusta County officer of Scottish origins.