The United States military build a large military training camp at this location in 1917 to prepare men for service in World War I. Known as Camp Zachary Taylor, this camp was constructed in only ninety days yet over 150,000 soldiers were trained at this camp which could accommodate over forty thousand troops. The camp trained the men of the 84th Division and was also home to the Artillery Central Officers Training School, the 21st Infantry Division, and the Army Chaplain School. 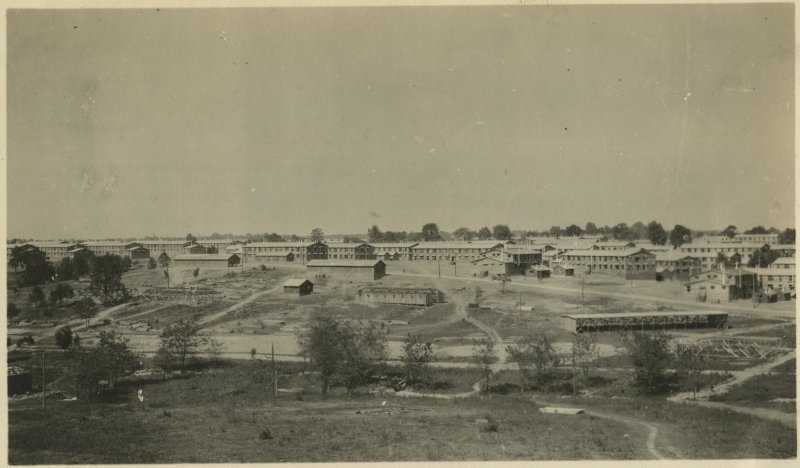 Recognizing the potential revenue for local contractors and businesses, most residents of Louisville welcomed the news of War Department's intent to build a training camp at this location. The camp was named in honor of Zachary Taylor, the 12th President of the United States, and housed soldiers from Kentucky, Illinois, and Indiana. The recruits included recent immigrants and over 2,000 men that were not yet citizens of the United States were inducted into the United States Army under a large tree in the city that became was known as the "Naturalization Tree" owing to the historic connection between military service and citizenship. In subsequent years, the Daughters of the American Revolution dedicated a marker at the location of that tree which was later moved to Taylor Park.

Construction required so many workers that barracks were needed to house itinerant workers from states such as Indiana and Tennessee. The camp was constructed in just ninety days at a cost of $7.2 million. Camp Taylor consisted of a central training camp area and a rifle range and two smaller training areas known as Remount Station and Maneuver Field. Letters and memories from soldiers indicated that camp life was a welcome break from the monotony of farm life for many men who were eager to save money while in the service and see parts of the country and the world beyond their homes. Towards the end of the war, the camp succumbed to the spread of a deadly strain of influenza that caused the death of millions worldwide. An estimated one thousand people at Camp Taylor contracted the flu during a three week time period leading to a quarantine.

After the war the Camp Taylor was closed and the wood and other materials used to create barracks were used to build homes in the area.