This park is home to the U.S. Botanic Garden Administration Building and the Bartholdi Fountain. The park was renamed in 1985 to honor Frédéric Auguste Bartholdi who designed the Statue of Liberty. The thirty-foot-tall Bartholdi Fountain was also renamed and was originally designed for Philadelphia's 1876 Centennial Exhibition. Capitol architect Frederick Law Olmsted purchased the fountain after the Philadelphia exposition was complete and placed it at the center of the National Mall which served as the home o the U.S. Botanic Garden until 1927. The statue was re-dedicated in 1932.

The fountain debuted at the 1876 Centennial Exhibition in Philadelphia. 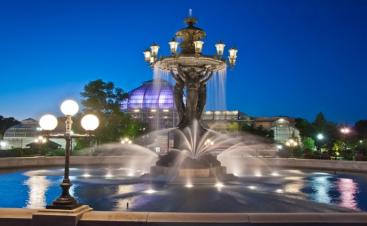 A zinc coating protects the original cast-iron of the fountain which dates back to the Philadelphia exposition that celebrated the nation's centennial in 1876. At that time, the fountain was lighted by gaslights around the center pedestal that feature three young women that appear to be holding the fountain's large basin. Water spills into that basin from a crown at the top while sea creatures at the base shoot water from their mouths into the central reservoir.