The 1909 East Des Moines Union Depot served passengers on the east side of Des Moines. Located in the Market District south of the Historic East Village, in the 1920s it was converted to a storage facility and was considered one of the most endangered buildings in the city. As the East Village and Market District undergo redevelopment to become popular destinations, developers are quickly buying land. To save the depot, the Des Moines Heritage Trust purchased the historic train depot and are working to restore the structure which is one of a few Flemish Renaissance-style depots still standing. Members plan to use this former depot as the future home of the Des Moines Heritage Center which will offer displays and programs dedicated to the history of the city. At that time, the building will include a museum and a home for local heritage organizations like the Des Moines Historical Society and the Des Moines Rehabbers Club.

The East Union Depot before the steel and block building was removed on the north side. 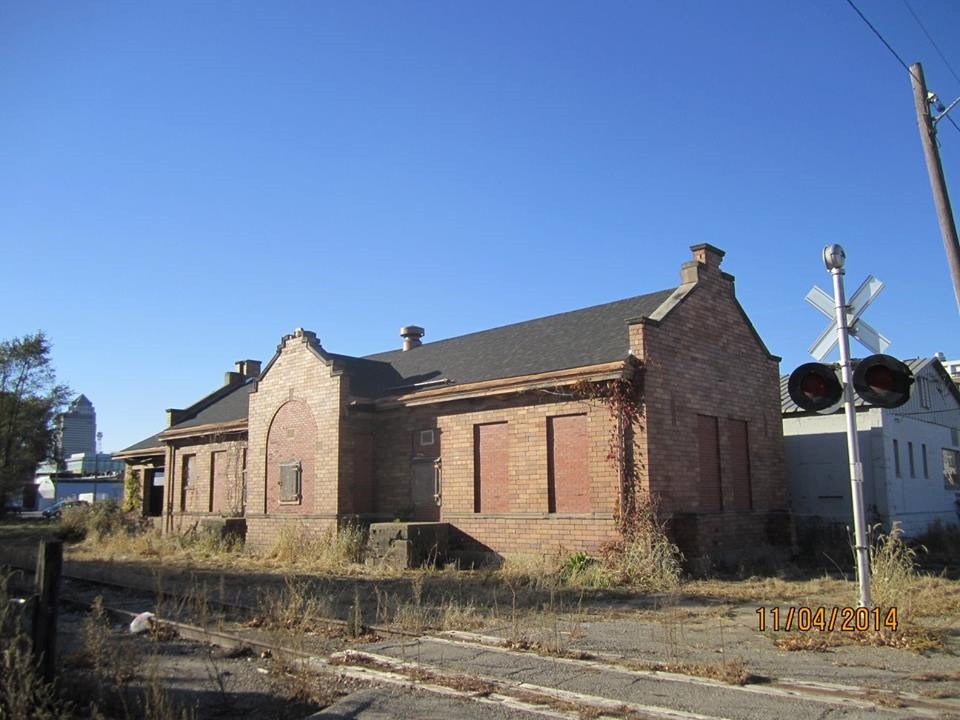 This rail depot was completed in 1909 and served passengers before it was converted to a storage facility for produce in the 1920s. Around 1950, the depot was boarded up, sealed, insulated and fitted with refrigeration equipment. At that time a larger steel and concrete block building was built adjoining to it through the main entrance on the north. That building was removed in October of 2017 and all utilities were disconnected

The building is one of only two extant railroad depots in the city and many feared that the building would be lost prior to the efforts of preservationists. In order to save the depot from being torn down to make way for new construction, the Des Moines Heritage Trust (DMHT) raised $500,000 in private and public funds to purchase the historic train depot. Fundraising continues and the organization hopes to raise an additional $3 million to build the event center and restore the depot. The organization is selling personalized bricks for the plaza as one of the fund-raising efforts.

To build the museum, the DMHT plans to work with the heritage organizations to determine what types of artifacts are available, and how they can be incorporated with technology so that interactivity is encouraged between the museum space and each visitor, and more information is shared. Because the building is relatively small,  the organization hopes to incorporate technology to maximize the value of the space, including an area that offers short film documentaries and oral histories, and a space where users can access digitalized photographs and databases. The organization also hopes to construct an event center next to the depot for cultural and community events.

The organization plans to begin the construction and renovation phases of the depot building and event center in June of 2018, with expected completion and opening in the summer of 2019. BNIM architects are currently working on the design for both the historic renovation of the depot and the details of the event center.

Waddell, Tim. One of the Most Endangered Historical Buildings in DSM Is Being Saved. Downtown DSM USA. December 01, 2017. Accessed March 24, 2018. https://www.dsmpartnership.com/downtowndsmusa/news-blog/blog/one-of-the-most-endangered-historical-buildings-in-dsm-usa-is-being-saved.

This walking tour starts at the East Union Depot and works its way to the State Historical Society of Iowa Museum and Archives and the Capitol. The tour includes several historic buildings as well as landmarks, museums, and monuments.