Located within the Mississippi Arts Center complex, the International Museum of Muslim Cultures offers exhibits and programs related to the history of Islam and Islamic nations. The museum also offers programs and exhibits related to the contributions and experiences of Islamic Americans--especially those in Mississippi and the South. The museum was established in 2001 and was the first of its kind in the United States.

An exhibit within the International Museum of Muslim Cultures 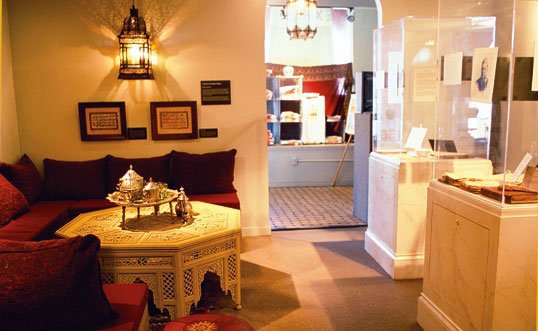 Although the importance of an Islamic cultural center and museum was demonstrated by the response of some Americans to the tragic events of September 11, 2001, the museum was not a response to this event. In fact, the museum opened its first exhibit in the spring of 2001. Several years prior to its spring opening, local Muslims met and discussed the need for a museum dedicated to educating the public about Islamic history and culture.

With the goal of highlighting the contributions of Muslims to world civilization, the founders began working to create the museum. They also sought to increase citizens’ understanding and appreciation of the richness of Mississippi’s diverse cultural and religious heritage and the role that Muslims have played in the state’s history and development.

The Museum opened in April 2001 with a major exhibition, Islamic Moorish Spain: Its Legacy to Europe and the West, that was featured concurrently with The Majesty of Spain, an international exhibition that ran for six months in Jackson at the Mississippi Arts Pavilion, less than a block away.