The current owner of this property has done considerable research and work into the architectural features, origins, and occupants of the home. Unscathed by the recent fire nearby, the structure and grounds are worth the drive. The concepts of community and a sense of place are exemplified here. 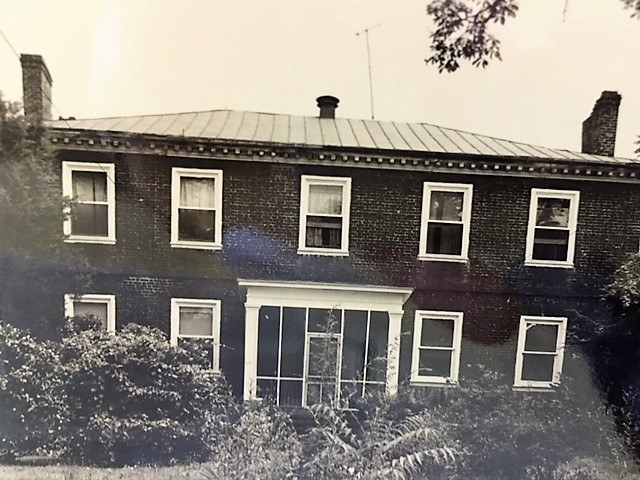 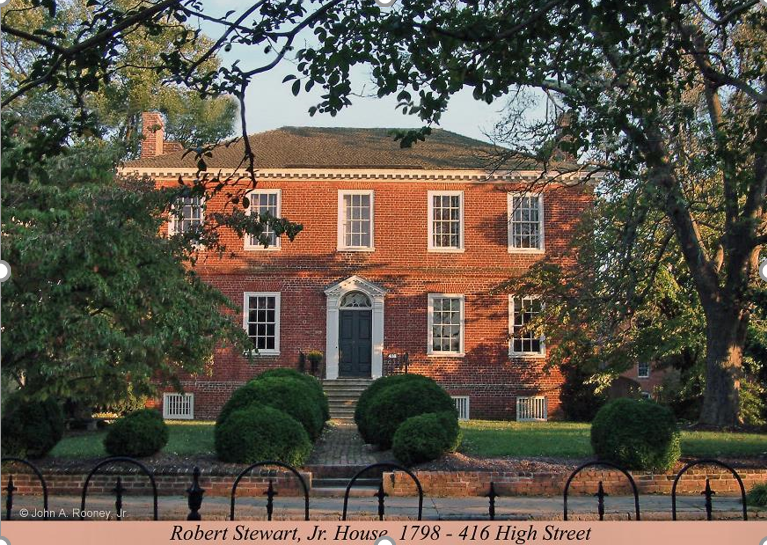 Scottish immigrant Robert Stewart, Jr. had this home built in 1798 after marrying the niece of Peterson Goodwyn, United States Congressman from Petersburg.  From 1815, the next forty years say a period of occupants who were many of Petersburg’s distinguished citizens. These include Dr. John Gilliam, physician; Frenchman Richard Furt, who founded the St. Joseph’s Roman Catholic Church;  D’Arcy Paul, merchant, financier, and philanthropist; Dr. William Jones Dupuy, whose wife was Edmund Ruffin’s sister; and E. J. Hudson, a tobacco manufacturer with considerable wealth. The Georgian style home has Federal detailing, as exemplified by many James River planation houses in the late half of the 18th century. Standard elements include a center-hall design, Flemish-bond brickwork with glazed headers and closers on the edges, gauged-brick flat arches at window openings, gauged-brick flat belt course, water table, modillion cornice, and hipped roof with wooden shingles. The Flemish-bond brickwork is found on all four stories. According to the National Register of Historic Places application, the basement windows are symmetrically placed, yet unaligned. This is the only breach in the strict formality of the exterior of the house. Both end walls are blank.

There is some contention regarding the porch. Listed in the materials for listing the property on the National Register, there was a partly enclosed porch on the rear. Neither the early insurance policies nor the 1877 Beers map show such a porch, though a temporary porch was featured.  There may have been a stone stoop similar to the version at Dodson's Tavern (c. 1797-1 8 1 1) nearby on High Street, a house which shares trim details with the Stewart Hinton House. Around 1980, a previous one-story was removed and a new one-story addition housing a kitchen was constructed. Multiple restoration efforst and modifications have occurred over the years.

The interior end chimneys and door enframement of wood are similar to the Wilton House, but the arched fanlight in the pediment, sic-over-six windows, and omissions of rubbings at the edge dressings are Federal.  The triple entrance in the rear is unique in Virginia. There are flat arches in gauged brick.  Original interior trims still exist, as does the cornice of terminal swirl and rampings in the first floor central passage, gouge-work diamonds and vertical flutings above modillions. Rooms on the main level are twelve-feet tall. The staircase has a carved walnut balustrade with a ram’s horn. There is a cornice with flat-paneled dado. Original heart pine wood floors and marble hearths are features on the interior, as well as the original interior shutters. The kitchen is built over the remnants of two smaller rooms, though the wall framing and doorways still exist as does the original dirt floor. An extensive archaeological investigation was done during the rehabilitation process, and over 2,000 domestic artifacts were unearthed. Initial impressions from review reveal the possibility that the servants worked in this space. Across from the structure stood the Seward Trunk and Bag Company, a worldwide company of manufactured trunks, traveling bags, suitcases, etc. around the 1880s.