Welcome to the longest bridge in America. The Lake Pontchartrain Causeway remains the longest continuous bridge over water - though it is not the longest bridge by length. Just under 24 miles long, the bridge was originally completed in 1956 - though a second span was later added in 1969 due to increased traffic. It has held a Guinness World Record in 1969, though there was a minor controversy in 2011 due to another bridge in China being technically longer, but covering a shorter amount of water.

A satellite view of the Causeway, showing off its full 24-mile scale - something impossible to do on land or on the Causeway itself. 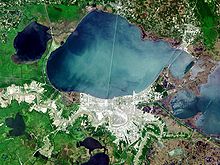 The southern terminus of the Causeway, featuring New Orleans behind it.

A shot in between the bridges. The bridge to the right is the slightly newer bridge that opened in 1969.

A picture from a commuter heading north. Something spooky about the causeway: for the middle 8 miles, one would not see land in any direction. 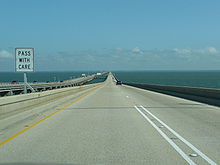 The idea for a bridge started in the early 19th century. However, the original idea was a series of artificial islands, with multiple bridges connecting them. This would allow homes to be built on the artificial islands, thus financing the project. However, the design that would become the first bridge came in 1948, when Ernest Loeb lobbied to create the Causeway Commission, which in turn appointed James Walters, Sr. to direct the construction. The construction of the bridge began soon after, and eight years later, in 1956, the bridge opened for the public.
The original span was 23.87 miles - at the time, the longest bridge in the world. It has 15 feet of clearance above the water, as well as 9,500 concrete pilings to support the bridge. It also contains a bascule, or drawbridge, 8 miles south of the northern shore. The southern end of the bridge is in Metairie, which is a suburb of New Orleans. The northern end is in Mandeville, Louisiana. On May 10th, 1969, a second, parallel bridge opened due to traffic constraints. This was 15 meters long than the original bridge.
Upon completion, the bridge caused a significant financial boost to small towns and communities along the northern shore of Lake Pontchartrain, such as Mandeville. This is due to the fact that the commute into the metropolitan powerhouse of New Orleans had been reduced by upwards of 50 minutes - before, people were forced to drive around the large lake, or on shorter bridges closer to the eastern and western shores such as the Maestri Bridge. In addition to this financial boost, the Causeway has also never sustained any severe damage from natural disasters - a rare trait, especially considering Hurricane Katrina's devestation to New Orleans in 2005.
However, a controversy befell the bridge in 2011. Up until this point, the Lake Pontchartrain Causeway had been the longest bridge over water in the world, claiming the Guinness World Record. However, another bridge, the Jiaozhou Bay Bridge in China, claimed to take the top spot, being 2 miles longer. The argument that defenders of the Causeway gave was that though it was technically longer than the Causeway, the curve in the bridge make the actual distance of water covered shorter than the Causeway's, due to it being a straight bridge. To solve this conundrum, Guinness split the category in two: continuous distance and aggregate distance. And today, the Lake Portchartrain Causeway remains the longest continuous bridge over water, seeing almost 45,000 commuters daily.