Initially called “Richland,” Myrtles Plantation was established in 1797 by General David Bradford, an officer involved in the failed Whiskey Rebellion of 1794. When Bradford fled to the Spanish-held Louisiana Territory, he purchased the land and began construction of Richland. Two decades after his death, his wife sold the land to Clark Woodruff. The estate was home to numerous families, including many enslaved persons, and changed ownership several times before and after the Civil War. The house grew over time and today the estate and mansion are open to the public for tours. Visitors can also choose to stay at the historic plantation which now operates as both a historic site and a bed and breakfast. 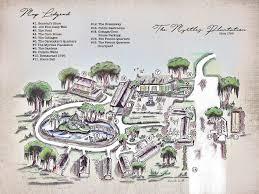 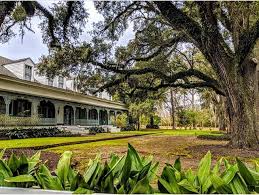 General David Bradford, an officer involved in the failed Whiskey Rebellion of 1794, fled to the Spanish-held Louisiana Territory to avoid being arrested for his part in the rebellion. He established a plantation at this location called Richland in 1797. One of the most unique features of Bradford’s original house was the stained glass entrance that featured a hand-painted design that was patterned after a French cross in hopes that this would protect the property and its inhabitants from misfortune or mischievous spirits. Two decades after his death, his widow sold the land and the mansion to their son-in-law, Judge Clark Woodruff, who remodeled the mansion.

The property's next owner Ruffin Stirling oversaw extensive expansion and renovation of the property including many of the most striking features of the plantation mansion. Stirling doubled the size of the house and added highly detailed interior décor, much of which was French inspired. The veranda, at 125 feet in length, has intricate ironwork railings. All of the ground floors have marble arched mantles, and most rooms also have unique plaster medallions on the ceiling. The entrance foyer has highly detailed faux-bois, or flooring textured to resemble natural wood grains, and open freize work (a decorative band near the ceiling of a room, often with carved art and designs). Mirroring each other are the ladies’ and gentleman’s parlors; both rooms are of identical size and also contain beautiful freize work.

The house’s striking interior design is only one part of the attraction. In 1992, the Myrtles owner took a photograph of the house for insurance purposes and noticed an apparition on the breezeway between two of the buildings on the plantation land. A film crew from National Geographic examined the photo and confirmed that the figure in the picture did indeed resemble a slave girl. At the time of the Civil War, property owner Sarah Stirling owned 149 slaves and her family members throughout the parish owned an additional 278 people according to the 2012 dissertation by Holley Ann Vaughn.

The owners of the property failed to maintain records of the many enslaved persons who lived here, and given the current owner's desire to attract overnight guests and host social events and weddings, tours of the property and its website reveal very little about women and men who built and maintained the property and its fields. Visitors may hear rumors about an enslaved girl named Chloe who was reportedly hanged for allegedly poisoning the daughter of property owner Judge Woodruff in the 1820s. The photograph, featured in a National Geographic documentary, became a popular postcard known as the “Chloe Postcard.”

Today, visitors to the Myrtles can take any of a number of public or private tours, including the popular nighttime "Mystery Tours." The plantation can also accommodate visitors staying the night in one of its many bed-and-breakfast rooms or cabins. The site offers very little information about the multitudes of enslaved people who lived, worked, and died at the plantation, choosing instead to focus on household furnishings, architecture, and the white property owners. Information about the enslaved people of this and other area plantations are difficult despite the fact that 7,164 of the 11,671 people who lived in West Feliciana Parish at the time of the Civil War were slaves.