Construction on Franklin Castle, the home of Hannes Tiedemann, a German immigrant, began in 1881 and was finished in 1883. As the years went on, features such as a ballroom were added to the house. After the Tiedemanns' deaths, the house functioned as a meeting place for many organizations. In 1984, the house changed owners once again, and they decided to renovate the house. The house has been misused and damaged over the years, but it was recently converted into three different homes. 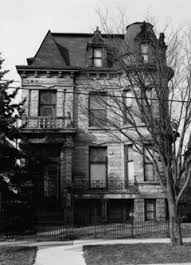 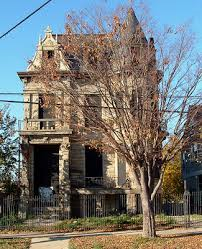 After Hannes and Louise Tiedemann's children and Louise's mother died in the Franklin house, Hannes added new features to the house to distract his wife. After Louise died, Hannes sold the home in 1896, and not soon after, Hannes died. All the deaths in the house led to rumors that maybe they were something other than natural deaths. It is also rumored that Hannes murdered his illegitimate daughter, Karen in the house, along with a servant and his mistress.
After the deaths of the Tiedemann family, the house served as a German Singing Society, a doctor's office, a German socialist organization, apartments, and more. There were then more rumors of murders happening in the house, including a mass murder of Nazi's and an ax murder.
In 1968, the house's then-owners, James Romano and his family, claimed they saw ghosts in the house. They stated that they had attempted exorcisms and hired a ghost hunting group. In 1974, they decided to leave the house and sold it to Sam Muscatello, who wanted to turn it into a church. He sold haunted house tours and overnight visits to try to raise money for the church, but in 1984, the house was sold again.
New owner Michael DeVinko, widower of actress and singer Judy Garland, spent close to a million dollars renovating the house, but despite all of their work, they put the house up for sale in 1994. Michelle Heimberger bought the house in 1999 with the intentions of fixing up the house, but a fire made a restoration impossible. Another fire occurred in 2011, years after rumors about a new Franklin Castle Club turned out to just be a scam. The house is now divided into a three-family dwelling.